Arslan: The Warriors of Legend

Arslan: The Warriors of Legend, is both something of a mouthful, and also the latest non-Dynasty Warriors Musou title to be released by Omega Force and Tecmo Koei. Based on the first season of a new anime series, itself based on a manga, which is based on a long running Japanese book series, which is based on a tale from Persia (thanks Wikipedia!), given it is a Musou game, there’s likely to be little in the way of surprises.

Is it worth a go anyway?

By now, we’ve had so many iterations of Musou titles that you could quite easily spend most of your time playing nothing else. More and more seem to be out there, following Hyrule Warriors and the recent Dragon Quest with the even longer title than this one.

For my part, while I was tempted by both the above, temptation it remained, and so I haven’t played a Musou title since Dynasty Warriors way back on PS2. I did enjoy playing through a couple of those, though, so I was up for giving a new version a chance, even if I did know absolutely nothing about the anime that Arslan is based on.

The Warriors of Legend is based on the first season of the Arslan anime show. Given the cliffhanger ending, I can well understand that this is the case (don’t expect a whole lot of closure), but as it is based on an anime, that means that the story is a fairly strong one. I felt it took a little while to get going, but once it did, it was an intriguing tale that almost plays out like Game of Thrones-lite, by way of manga, with plenty of twists and turns, betrayals, death and revenge. Many of the lead characters are extremely likable so you end up rooting for them, but it also does a good job of layered characterisation, with some sympathy falling on both sides, and characters whose intentions are sometimes somewhat unclear. 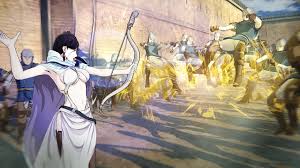 One slight criticism is that it suffers from a touch of the Metal Gear Solids at times though, with some fairly lengthy cut-scenes. Most of the story is done via anime cut-scenes rather than in play, and there’s a good amount of story to tell. It’s worth noting that there’s no English dub here either, voice work is all in Japanese, with subtitles. Personally I’ve never had an issue with that but fair warning nonetheless.

Of course, the main crux of the game is to take on crazy numbers of enemies, and in this if you’ve played any Musou titles previously, you’ll largely know what to expect. While many years have passed since my Dynasty Warriors PS2 playing days, the formula really hasn’t changed a great deal. It’s still by and large about plowing into swathes of enemies with different characters and weaponry to get kill counts into the hundreds, if not thousands, with main enemies being highlighted for dispatching.

There are some differences of course, in part tailored to Arslan as a tale. Some stages feature 1 on 1 battles, with major enemies who have shields (of the “magical”, or Star Trek variety rather than wooden or metal), which you have to whittle down before you can do damage. There’s also a feature called the Mardan Rush, where you can enter rush zones, press R2, and this launches an attack with a platoon of archers, your cavalry, or infantry, depending on the situation, usually to clear a path to the next area of the map. A couple of characters also have unique skills, although I found these were rarely used, making them feel largely irrelevant. 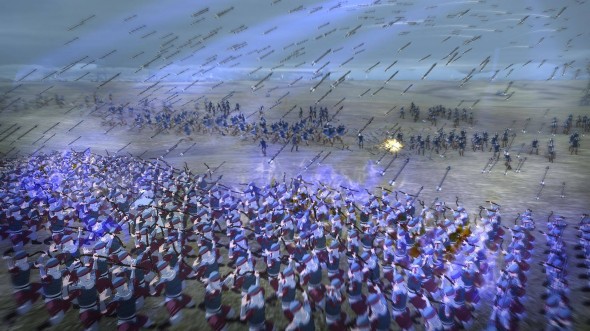 Arslan gets its Mardan Rush on, Archer style

The core is fighting, and while it is fun, engaging, and satisfying to see that KO count climb rapidly, frankly it doesn’t take a great deal of skill, at least on Normal as I played it. I can only recall a couple of occasions where my health bar was in any peril, and then I was in close proximity to a health pickup. The only times I failed a mission were due to running out of time, and even that only happened a couple of times. There are higher difficulties, so if you have any skill whatsoever – and by this I mean you’re good at hitting square and triangle, with the odd circle for special attacks thrown in – I’d suggest going straight for them.

There is also an RPG-lite system in play, with characters gaining experience and levelling up, which provides more hit points etc. This also feeds into a system that allows you to equip cards you win by scoring well in levels, and by taking out the named enemies that appear throughout stages. The higher your level, the more points are available to allocate the three cards you can select from, with better cards costing more points. The cards provide stat buffs and other bonuses, although I have to say I rarely felt they were adding anything tangible, aside from one that allows an Eagle named Azrael to assist you in battle.

This is a problem with other systems too, such as one that applies elements to your weapons. In the latter case, your attacks are changed and you see the effect of the elements, but neither of these systems really felt like they were giving me an advantage in battle. I always felt like I could remove those cards, and go back to the basic power weapon, and still get through any level without any major issues. So much so that I had to remind myself to go into the menu to make changes, and a number of times played through large parts of a level with a new character without even noticing I’d not set any cards up for them. 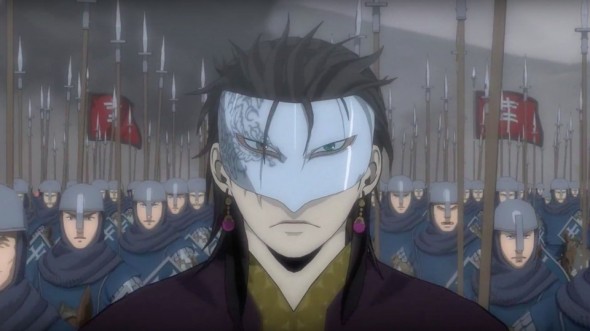 Big bad Silvermask has a secret which garners some sympathy, marred by him not being a particularly nice guy!

One other issue that’s always been apparent with Musou titles: Given the sheer quantity of enemies, the graphics, particularly for the levels themselves, have generally been subpar. Arslan is helped by using anime-styled graphics as they’re simpler to translate into a game, so the characters all look pretty good (ignoring the fact that the many foot soldiers are identical, which is forgivable in this sort of game). The environments aren’t as bad as I might’ve expected but don’t go in expecting a graphical tour de force, as this certainly isn’t one. It plays solidly though, I don’t recall encountering any issues with slowdown at all.

Outside of the main story mode, there are no great surprises. There’s a free mode allowing you to go back through levels with different characters that you unlock along the way, and you can also play local or online multiplayer if you’re feeling sociable.

Legendary Warrior, or a bit arse?

Despite some of the negative comments above, I did enjoy playing through Arslan, in large part down to the story, but there is also something fun and satisfying about the Musou formula that makes me feel as though I’d be happy to dip back into it now and then.

Should you be a fan of Arslan already then it’s worth a punt. Even if not, or like me you’ve never heard of it before, there’s enough here to enjoy to give it a go. If you’ve already had your fill of Musou recently, however, then there’s probably not enough here to recommend you dip back in again.