If there’s a game that hasn’t seen a lot of public attention, it’s Sega’s Binary Domain. The development team has faced various struggles getting their game out there due to the obvious similarities to other popular games, such as Gears of War.

Binary Domain hasn’t done much to try to steer clear of any of the comparisons, either. If it wasn’t for the odd trailer here and there, people would have probably completely forgotten it exists. That is perhaps the driving force behind the release of this demo, a good few weeks before the game hits stores.

The demo is currently only available for Japanese gamers, but it is surely only a matter of time before it hits other regions.

The demo itself consists of three missions that players can go through, with the first being the standard training affair, used to familiarise players with any new game.

Considering that it’s a shooter, it didn’t really feel necessary to have a whole mission dedicated to showing us the ropes. Other games have been incorporating tutorials into early missions for years, so it’s confusing to not see it happen in Binary Domain. 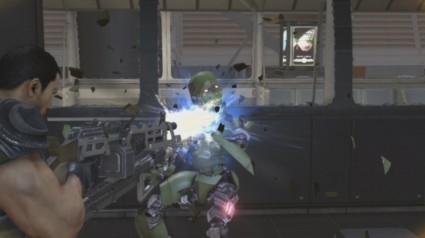 The first proper mission takes place in the back streets of a futuristic Japanese city. When you start, it’s necessary to pick two squad members to accompany you, since the game allows two A.I. controlled characters on to the field.

Although they have unique physical traits, none of the characters available seem to display much charisma, but then again, neither do most of the typical characters that appear in shooting games.

This particular mission consists of your team clearing a couple of blocks that are overrun with Terminator wannabe robots. Turns out that nobody paid attention to the Terminator movies and now humanoid robots have taken over and roam the streets of Tokyo. As with most third person shooting games these days, cover and shoot is the standard tactic in Binary Domain.

The demo, overall, didn’t give the impression that it’s necessary to use any other strategy either, besides sticking to cover when near death. There are a few rare exceptions, such as going upstairs inside ravaged buildings to get the upper hand on those pesky metal paperweights. Perhaps the most interesting sight in the demo is the layout of the streets and seeing what Tokyo overrun by robots might look like. Scattered around the levels are ammo-dispensing machines, which use points earned from defeating enemies to buy upgrades and ammo.

This demo also familiarises players with the concept of giving orders to the A.I. controlled characters. It requires a headset to do this and sees you pressing a button and speaking one of selected orders into the receiver. A simple concept that didn’t really add anything to the gameplay, and it makes one wonder why buttons couldn’t be used. When downed, a character can be revived by the others or do it themselves, using a syringe.

This first mission culminates in a fight with a giant mech that requires the use of props around the area to weaken it first; a great use of the environment. Continuing to the second mission, which now takes place in a fancy underground station, it’s here that the demo started to liven up with the usage of props, such as train carriages, playing a part in the battle against the machines. 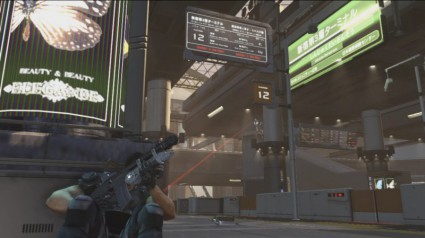 Taking cover is a big deal in this game.

It’s also in this mission that different types of robots get introduced. One particular bright red robot stood out, mostly due to its peculiar bullet evading routine. Each robot behaves differently, with some even hell-bent on suicidal attacks. The robots, however, don’t present much of a challenge when it comes to how they attack the player, though adjusting the difficulty should sort that for those who want more of a challenge. The mission ends in a fight with what looked like an indestructible gorilla-shaped mech boss.

It’s impressive for a demo to have this much content for a player to try but I can’t help but feel that it will end up turning a lot of people off the full game. If anything, this demo seemed to imply that Binary Domain won’t have any unique features that will make it stand out in the vast sea of shooters that is the current games market.

Hopefully the retail release will see Binary Domain redeem itself somewhat, since in this incarnation it feels like an average shooter, its feature set already been implemented in similar and arguably better games.