Having had two recent demos for Konami’s PES 2013, this week has seen the release of its big rival from EA Sports. FIFA 13 looks to build on the huge success that the franchise has seen this generation, by adding an extra degree of depth and polish to each of its existing game modes.

Unfortunately the demo, which is now available on XBLA and PSN, gives us very little interaction with any of these game modes, except for a few new training mini-games. Instead, you only get a very quick friendly match.

How does it shape up against last year’s version? Read on to find out.

This year’s demo gives you the option of five clubs from across Europe; Arsenal and Manchester City from England, Juventus and AC Milan from Italy and German Champions Borussia Dortmund. Having selected your team and your opponent, the match starts to load. In place of the traditional arena screen that lets you practice one-on-one against a goalkeeper, you now get one of the new skill challenge mini-games, the only truly new thing about this demo.

These mini-games are designed to hone your ability and they reminded me of the Virtua Tennis training games. For example, you have Penalties and Free kicks, which see you trying to hit targets placed in the goal, while long passing sees you trying to kick the ball into one of a number of dustbins on the pitch in front of you. Success earns you XP which will be used throughout the game as per last year, as part of the EA Sports Football Club.

I must admit that the mini-games are good fun and it’s also nice to see something different from the usual arena, but a couple of questions stand out. Why, when I’m standing still and not touching the left stick does my long pass veer to the side? Why does the Penalty mini-game give you a moveable guide to assist with hitting the targets, while the Free Kicks don’t? 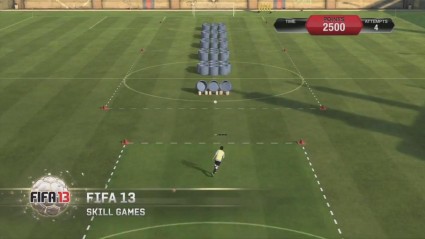 From here, it’s into the pre-game and while the demo allows you to tinker your line up, the difficulty setting and the controller configuration, you have no control over the length of the game and are stuck with the very short three-minute halves. I’ve often felt that sports games have a harder task than most genres to sell their product on a demo, but EA Sports have done themselves no favors here. If you are only going to allow potential buyers a look at the most basic game mode, you need to at least give us enough time with it to get a feel for the tweaks to gameplay.

The other changeable option is whether to use the EA Sports Matchday setting. This appears to work in the same way as the Live Seasons of previous versions, where it factors in real-life form and can change the ratings of individual players and the teams they play for. In one game I played, the team’s overall rating jumped by almost ten points with this switched on.

The core game presentation again follows on from last year, with a touch more TV style polish to the warm up and danger man pieces, which has basically padded out that section. Commentary remains with Alan smith and Martin Tyler of Sky Sports and, to be completely honest, trying to spot any differences in visual or sound overall is pretty difficult. I should point out that the backgrounds in both menus and this pre-game presentation are much lighter and there is a slightly different piece of music in the background. 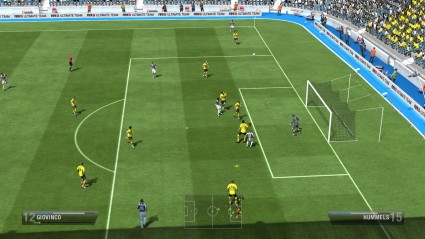 Slight size mismatch in the box there.

Out on the pitch, as ever, is where it matters, though, and my immediate impressions of FIFA 13 were, I have to admit, not good. On my first few games I felt that the player movement appeared to be less fluid than previous versions and the A.I. of your teammates had at best stayed the same, despite the promises of the new “Attacking Intelligence”. To top it off, the player animations felt slower than last year so the game in general appeared to be jerky.

However, the more I have played the better it has felt and the subtlety of some of the changes to gameplay have now started to come to the fore. Where I felt player movement was less fluid, I now feel that players have an added level of balance that allows them to turn quicker and to a greater degree, as the top players do in real-life, giving you an extra option to elude defenders. I have also picked up on a few occasions where my teammates have started a run but then stopped because my pass wasn’t delivered quick enough and, having got to a point where I now see the runs a little earlier, I have managed to stroke the ball around more and opened my opponent up better.

This has filled me with far more hope that FIFA 13 will be able to build on the success the franchise has seen in recent years, though I temper that hope with a touch of caution. It is difficult for me to quite put my finger on why, or what in particular it is but, despite playing an absolute bucket load of matches, it just doesn’t feel as good as last year. The matches in this demo are short and that may be a part of it, but the game is just not as smooth or as fluid, meaning your play doesn’t flow in the manner we’ve come to expect.

Either way, we’ll know for sure in a couple of weeks when FIFA 13 hits the shelves.