For a number of years now, the 2K produced series of NBA games has been held up as the pinnacle of Sports Simulation and not without merit. The level of detail in the series is, quite simply, second to none and we find ourselves in a situation where all other sports simulators are inevitably compared in some way, shape or form to this masterpiece.

Last year was my first hands on experience with the franchise and, as a basketball novice, I found myself out of my depth on a few occasions during the review, but still managed to enjoy the experience overall; the love and attention paid by the developer to its subject matter was nothing short of amazing. With NBA 2K15, though, I find myself somewhat more overwhelmed despite that year of exposure, as developer Visual Concepts have taken that attention to detail to the nth degree.

This year’s game takes the bulk of what made last year’s so great, and simply ups the ante. All the major game modes return, the control system is largely the same, the depth and focus on ‘Sim’ is huge and, as you’d expect from a next-gen title, the visuals are simply stunning.

The series is unashamed of its focus on realism and, as such, has never been particularly welcoming to newcomers and casual fans of the sport it pays homage to. However, this year it goes a step further, stripping back the tutorials to nothing more than a few short videos. This means if you haven’t played any of the previous iterations or have had limited exposure, you need to spend a fair bit of time doing extra YouTube viewing and going into practice modes to learn the game. It’s not quick, it’s not entirely user-friendly and it is very much above and beyond any other game you’ll likely play this year. 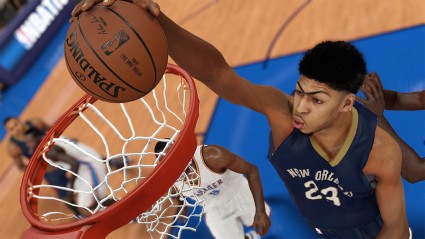 Everyone loves a good dunking.

‘My Career’ is probably the lightest of the game modes and tracks you on your journey from undrafted rookie to NBA Superstar. When entering My Career, you can create your player using a pretty comprehensive editor and then sit back and watch the cut-scenes of draft day as you go unselected. A few choice words with your agent lead to a number of opportunities for a try out and a short term contract to prove yourself on the court.

For me, this appeared the best way to learn the fundamentals again; take control of a single player, focus on the basics of a single position and go from there. Even here, though, the unforgiving nature is clearly evident. Any mistake is harshly punished in grading and as an undrafted player, your time on court is already very limited so you need to be almost flawless to progress. This is tough, though the control system itself makes things complicated.

The right stick is again used to perform everything but the most basic passes, shots, and dribbles, which are needed to open defences. While the set-up is the same as last year, it does seem much harder to get the timing and combinations right, and has left me dribbling when I wanted to shoot and vice-versa on more than a few occasions. On top of that, in the My Career mode – where every move and step is graded – the number of times I’ve seen “unrecognised command” appear when I’m simply moving across the court with the left stick adds to the frustration. 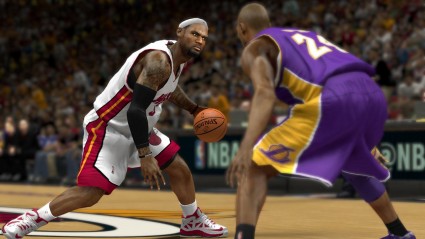 The alternative to My Career is ‘My GM’, which is the full franchise mode that gives you eighty seasons to develop your own franchise into a multi- championship winner, while making millions from fans through merchandise and ticket sales. It’s here that the truly epic level of detail within 2K15 really shines through, putting Madden’s equivalent or even the Football Manager franchise to shame with the number of interactive options and adjustments at your disposal. The polarising nature of 2K15 is again evident and, as a sports fan, I can’t help but feel completely in awe of the detail. Everything about the sport is included, from player contracts and trades to scouting rookies, hiring staff and training, right the way through to pricing tickets, merchandise and jerseys. There is simply nothing the developers have forgotten or overlooked.

However, as a Basketball novice, and with the incredible lack of any kind of tutorial or on-screen tips, it’s also incredibly overwhelming.

The middle ground arguably comes in the ‘My Team’ mode, which is 2K’s answer to Ultimate Team and allows you to collect players and items by completing a number of challenges and competing in matches, both solo and online. Again, there’s a huge amount of depth for the NBA fanatic, but with the card collecting element and some of the challenges aimed at the beginner, there is also a bit here to welcome newcomers to the fray.

As with other games in the franchise, the visuals are incredibly detailed, again adding to that realism. Player movement is superb and likenesses in the main are also very special, though I wasn’t convinced by Shaquille O’Neill in the pre-game show.

The presentation and fan service is just immense with pre-game, half-time and post-game cut-scenes that mix TV style presentation with court-side experiences of the highest calibre. As with everything in NBA 2K15, though, this comes at a cost with some of the longest loading times I have ever experienced in any sports game. In fact, there are so many cut-scenes that at times it loses its flow and rhythm, and feels more like a throwback to Metal Gear Solid than a sports franchise. What’s most annoying, is that a large number of these cut-scenes become repetitive and even skipping them takes way too long. 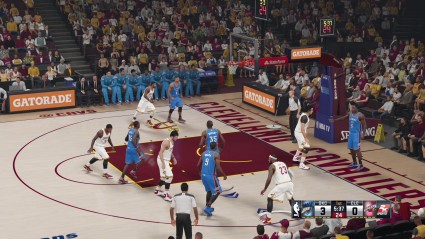 I promise this is a screen shot.

The soundtrack is also top-notch, with a great blend of new and old hip-hop tracks throughout the menus, and some of the best play-by-play commentary you’ll hear in a video-game. The in-game effects are also incredibly realistic and in the My Career mode, you’ll get help and advice from your team’s veterans, voiced by the real players. Again the attention detail astounds.

There is absolutely no denying that NBA 2K15 follows in the footsteps of its predecessors by delivering an incredibly well created, hugely detailed sports simulation. It’s also fair to say that anyone with any interest in sports or sports games, will be able to appreciate the attention to detail on offer here. Basketball fans really should not hesitate to rush out and buy it.

Unfortunately, however, NBA 2K15 is also the most unforgiving sports game I have ever played, and as someone who is no more than a casual fan of basketball, there just is not enough instant reward on offer to make me want to keep trying to learn. The lack of any help or guidance just forces the casual player away more than ever before and, at times, left me completely frustrated.