This time last year I was fortunate enough to be sat in on the developer session that pretty much announced the next Hitman game to the UK market. This year at the Eurogamer Expo, we have been given a sneak peek at the Contracts mode in another developer session, as well as finally getting hands on with Agent 47 ourselves down on the show floor.

Having done both I am now part of the what is probably the biggest group Agent 47 photo ever (having been made to don the red tie and strike the Hitman pose with everyone else in the Developer session), and am also the proud owner of a small Hitman model that is now sitting pride of place on my desk.

As for the game itself, what have we learnt? Read on to find out.

As mentioned, this year’s developer session was all about the Contracts mode which is the new multiplayer option. I use the term multiplayer loosely, as essentially what we have here is a kind of challenge mode, all be it a pretty unique one. The session took place on the City of Hope level and details how you set up a contract challenge for the community and what it will add to the game as a whole.

The mode was described as a “reverse murder mystery”, and despite my initial doubts looks like it will be a lot of fun. To set up a contract you essentially play a level and mark up to three targets. Any character within the level can be marked and you can perform the take downs in whatever way you choose and then must leave the level to complete it. Finally, you can set a couple of variables depending on your methods for other players.

We were told that the difficulty you play on will be set as the difficulty for those taking on your Contract. The variables come from setting whether others have to copy exactly your choice of weapons or are allowed to use their own, and if you want others to be restricted by your changes of clothes, or lack of. So, if you go through the level without changing clothes and want your contract as hard as possible, you can force others to have to go through without changing clothes. However, if you have changed into, say, a police uniform, that option immediately is available for anyone else to use. 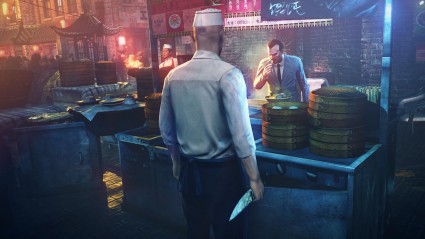 Other parts of the contract are fairly open such as the path you take and the order of the kills, but the ultimate goal is to earn cash to use on weapon upgrades. Cash is earned on the style in which you kill and the time in which you complete the contract, so making it look like an accident might earn more than a standard pistol shot to the head. In terms of the timing aspect, the timer starts when you make the first kill and ends when you leave the level. This means a little bit of thought has to go into when you start the killing if there are multiple targets on the contract.

Down on the show floor the game was set up with a single kill contract that tasks you with taking out the King of Chinatown. He is situated in the centre of a very busy market place that not only has a lot of civilians, but also more than a few police patrolling that you need to be aware of. The only stipulations appeared to be that you need to kill the target and then needed to leave the level. How you went about this was entirely up to you.

Unlike the Podcast guys, I did manage to complete this with a fairly healthy $250,000 to show for my efforts. Having entered the market place from a quiet street, I made my way through the crowd of people calmly to locate my target, who was on the phone on a small raised area pretty much in the middle.

Making sure not to run or draw attention to myself by antagonising anyone or showing any weapons, I then followed the King. He decided to go and get a bit of food from one of the vendors, before taking a leak in a corner under a handily placed palette that could easily have been dropped from the right vantage point. From my location this would have drawn too much attention though, so I decided that this secluded area was perfect for a silent takedown and strangled my target, leaving his body hidden behind a truck in the area. 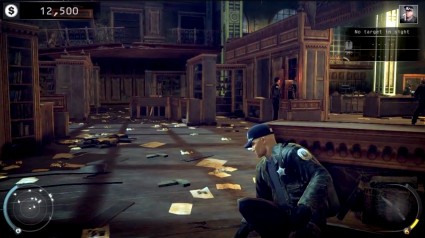 Where are the bloody cleaners?

Having watched the earlier developer session I wrongly assumed my exit point would be the same as the entry point and walked back through the crowd to my original location. During this time, the body was found and the police started searching for any clues that would highlight the killer. After reaching the start point to find I was essentially locked in, I had to walk back through the market again and past the now-alert police officers without drawing attention to myself. A few minutes later I realised that my exit point was actually a chicken factory right next to where I’d dumped the body. I walked past the police and through the door to freedom.

Although this was a pretty simple set up the options were huge. I was later aware that entering one of the apartments opened up the option to snipe the target, and as well as the palette I also stumbled across a petrol can that could have made a nice little bomb to make it a very different takedown to the one I chose.

The mechanics within the game look and feel very impressive. Selecting weapons and items is a simple case of holding the left bumper and picking your option from the menu. This can be disarmed by tapping down on the D-pad, and if appropriate fired with RT. The market place looked impressive, with some real variety to the many faces that were in the streets and a general din that was punctuated by audible conversation if you stopped to listen.

While short-lived, this demo left enough of an impression for me to say that I am now almost as interested in the Contracts mode as I am the main single player story, and Hitman: Absolution is very much on my wish list.

You can view the developer session in our forums.