Chillingo (owned by EA) is arguably the most prominent publisher of iOS video-games, boasting hits such as Cut The Rope, Anomaly: Warzone Earth, and the unfathomably successful Angry Birds series. They had a strong lineup at the EA showcase, with plenty of upcoming titles to look out for. The following is a round-up of my impressions for many of them, so if you’re an enthusiastic iGamer, read on.

This was one of the best titles at the Chillingo section and one that everyone wanted to try. The concept behind it is simple but highly entertaining. The story is about window cleaner Edgar and his quest to get the girl of his dreams. Story is a big selling point for this application, since it’s all interactive. It’s often said that life is but a rather long theatre play, and it’s up to the characters to make the most of it; an appropriate reference considering that players are in charge of Edgar’s life-changing decisions.

Each act of this interactive experience is a new act In Edgar’s life. Controls are very easy to get used to; swiping right will make the main character actively engage in whatever situation he’s presented with. In a certain act, Edgar had to get close to his lady crush, but it won’t work if he tries to rush it. Swiping left will cancel out any active movements and hopefully not fail the current chapter. 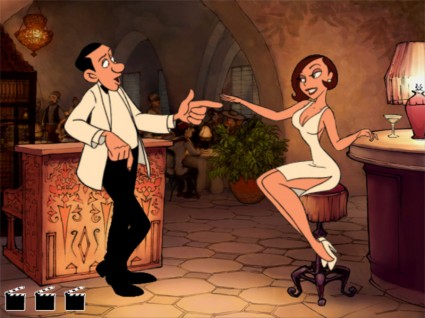 Welcome to the dangerous world of dating.

The app can recognise different types of finger swipes and translates them as on-screen animations. Performing actions with the right timing is the key to completing each act. Another act asked the player to start laughing, when a group of doctors did the same action. Stopping the laughing animation when they did would make it less likely to fail. It’s all about looking for signs on-screen and seeing when is the best time to perform actions.

The Act is a treat to the eyes with its use of traditional animations. Each new act brings new locations and characters to interact with. The controls also work without any problems, and overall it seems like an enjoyable experience. Anyone interested should look out for The Act on iOS devices this summer.

Air Mail
Air Mail, put simply, is a flying simulator with some tweaks to make it accessible to a wider user group. The main aim of this app is to complete various types of challenges. This may be quite obvious, but delivering mail is one of them. The number of challenges is impressive, however, and there’s a few interesting ones to try. 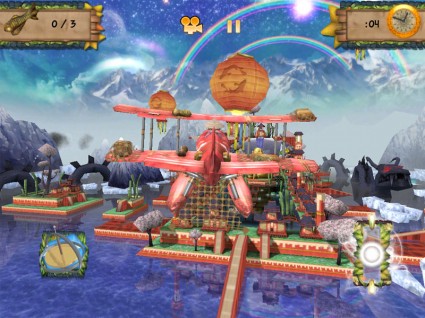 Fly an airplane from the comfort of your iOS device.

It’s also possible to just fly around the tropical island setting. There’s three types of controls to pick from before going airborne, and the one that was easiest to play with made use of tilting technology. It makes for an enjoyable experience and is the one recommended for most players. Anyone looking for a challenge can pick the advanced controls, however. These make it possible to perform tricks, but it’s much harder to control the plane as a trade-off. At times the touch screen wasn’t so user-friendly, but it still worked to a certain degree.

Air Mail is a simple app but it has plenty of content to keep players motivated. It will launch on iOS devices at some point this spring.

Shaun the Sheep: Fleece Lightning
It’s common for companies to make use of existing characters in video-games. This app makes use of Shaun the Sheep to introduce beloved characters from the cartoon, to the world of racing.

The striking visuals are something that players will immediately notice, which is not surprising, since it includes artwork from the famous Aardman. The app consists of levels set in different locations, and it’s only possible to play further levels by doing well in the ones already unlocked. This is not a new idea, but works in ensuring that the player will keep coming back for more. It’s also possible to create levels, but sharing with other players isn’t a possibility as of yet. Hopefully it’s a feature that gets added in future upgrades.

The levels are similar to retro racing video-games such as Micro Machines. Obstacles blocking the path provide a welcome challenge, and each level is completely different from each other, since objects get placed in different patterns. Later levels introduce objects to help players, such as ramps, since they get progressively harder. There’s a few control schemes but the one that worked best involved touching down on the screen. Other control methods weren’t as effective and made it harder to control the character.

Shaun the Sheep : Fleece Lightning is a fun app for everyone that likes the cartoon. It’s also easy to play for hours thanks to its competitive nature. Fortunately, there’s no need to wait on this one, as it’s out now on the App Store.

Commando Jack
There’s already many tower defense video-games out there, but there’s no harm in releasing another one. Especially when developer Colossal Games is attempting to revitalise the genre. The story follows hero Commando Jack on his quest to annihilate the invading alien forces.

What differentiates it from the competition is that it’s more of a last stand. There is no need to constantly move to new rooms, and it is much more action focused. There is an impressive selection of weapons to pick from, that are used by switching to first-person view. Each works in a different way, and upgrades are available. The weapons are easy to handle and it’s interesting to try to see which is better at defeating each enemy type.

Equipment such as turrets are also employed on the field. Using credits is the only way to deploy them, so it’s wise to think carefully about what to use. Fortunately there are different types of difficulties for every kind of player, and it’s not just the level of difficulty that changes. The level layouts are different with each difficulty setting, which provides players with a reason for trying to play through each map more than once. The number of enemy waves also changes with each difficulty. 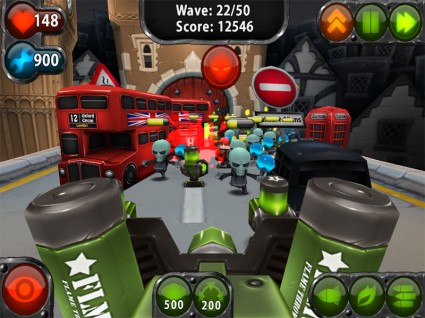 Commando Jack needs you to fight the alien invaders.

Then there is a perk system that allows players to pick one special ability. This turns it into a tactical decision since each has a unique purpose. Swapping each ability with the right timing will enable the player to reap bigger rewards, such as gaining a lot more credits. One of the best parts involves seeing how enemies react to objects placed on the map, as they will have to change routes and it’s all part of strategies that players can use.

Commando Jack has a strong visual style that is reminiscent of watching older monster films, and there’s quite a few locations to choose from which are all based on cities. The team is confident that it will change how players perceive the tower defense genre. It’s a bold claim, but Commando Jack is already looking promising. It’s currently scheduled for a spring 2012 release on the App Store.