You can usually see the end of a console cycle coming a mile away, as publishers get lazy and press their development houses to rehash any and all franchises that have made them any kind of profit rather than taking a risk on a new IP. With the Wii U about to launch and the entire industry shouting from the rooftops that next year will see, at the very least, an announcement from both Sony and Microsoft regarding their next generation efforts, finding a title without a numerical value at the end is like searching for a needle in a haystack.

However, in spite of this current situation there are still a few development houses out there prepared to take a chance and break the mould, like Arkane studios, developers of the upcoming Dishonored. At the recent Eurogamer Expo we were given a compelling first-hand show of what the game has to offer while also getting a chance to play through the demo level ourselves on the show floor. Here’s what we thought.

One of the main focuses of the development team when creating Dishonored was to give the player freedom of choice within the game world. This has been clearly articulated throughout all the trailers. During the developer session they were again very keen to emphasise this desire, and spoke of the player being dropped into a level with the tools to complete their goal but then being left to their own devices to create their own journey.

We were given two very different walkthroughs of the Kaldwins Bridge level, which is approximately halfway through the story and tasks you with locating and kidnapping Antoine Sokolov, the Royal Physicist. The first of these was meant to be a stealthy approach, with the aim being to complete the goal without taking a life and ideally not being spotted. Played on the normal difficulty setting we saw first-hand that Dishonored will carry a solid challenge. The guys from Arkane talked about the AI not being scripted, meaning that you cannot simply learn the routes they take and time your movements around them.

This became rather evident when the stealthy walk through turned a little noisy fairly early on. Once spotted, NPCs hunt and chase you aggressively and we were advised that this will be even more the case on the higher difficulties. Having managed to escape the enemies with a magic ability that sends your chasers to sleep and a few carefully aimed shots to the legs (raising a few laughs), peace resumed and the show continued.

The second walkthrough was as different as you could possibly wish for, with weapons and aggressive abilities in full display. The guys were keen to point out that at this point in game you won’t have access to all the options on display here, but you will earn them eventually. I cannot wait! There are so many options to the player that allow you to create some truly memorable ways to take out your chasers, that I am sure this game is going to be a huge amount of fun to play. 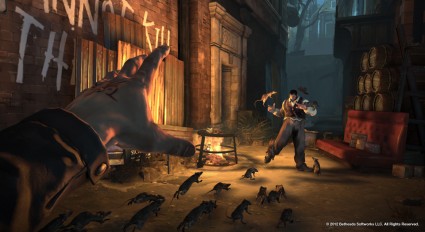 We were taken on two very different routes that highlighted how open the level was, and were told that by and large, if you can see it, you can get there. Arkane Studios team thought long and hard about the Blink ability that allows the player to teleport short distances, and whether to make it available to all players at the start of the game. Nonetheless, they were keen to tell us that anywhere you can access with Blink you can access just the same without using it.

We were also taken on a detour through some side buildings and shown a few of the game’s collectibles such as Runes and Bone Charms, which can be used to upgrade your abilities. Various items and ammunition can also be collected and sold, allowing the player to purchase others that may be of more use, again displaying the player’s freedom.

One of the things that stood out during both displays was the fluidity with which a skilled player can switch between skills and abilities and the style in which these abilities are portrayed on screen. It was also very evident that when the development team talk of making the game open to your own interpretation and play style they weren’t kidding. There has clearly been a huge amount of work on this particular trait and it looks to be paying off.

When I got my turn down on the show floor I have to say I thoroughly enjoyed the game. It was only a fifteen minute time slot which is pretty tight, though we were told the level can be completed in only a matter of seconds. Unfortunately I didn’t manage to get all the way through, as despite my best efforts to sneak through I was spotted early on and then struggled to escape. 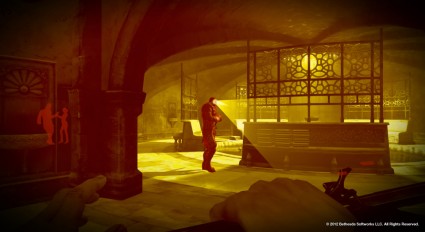 Not all of the abilities are violent

I also believe from this short demo that Dishonored is a game that needs the player to invest some time to master. While the Right Trigger works your right hand, the Left Trigger works the left. This seems straightforward enough until you consider that your Right Hand is exclusively saved for your sword and your Left does everything else.

You can assign a total of four abilities and/or long range weapons to the D-Pad by holding LB to open a wheel that shows the abilities and weapons you’ve unlocked and selecting the direction to place it. You then press the appropriate direction to assign it before using LT to use it. This means that when in combat you have to quickly remember what has been assigned where, and quickly switch between them. This definitely takes some getting used to.

Dunwall is beautiful in its own way and the game has a very attractive and unique art style that draws the player into its world. Movement is incredibly fluid, allowing you to easily feel comfortable in the role of supernatural assassin. One question mark is that while there is the option to use shadows to your advantage, street lights cannot be shot out. This was a conscious decision from the development team for two reasons; the first is to show off the game’s unique art style, and the second was that they did not want the player to be able to be hidden in shadow while up close to an NPC. This was deemed unrealistic, and in testing it became something of an awkward mechanic to implement in the way they wanted.

It is safe to say that I walked away from the demo and developer session wanting more time and counting down the days till Dishonored hits the shops. That’s Friday 12th October, by the way.