It was surprising to see Konami giving control of development for the next Metal Gear entry to an external developer. Platinum Games has plenty of experience in the genre, so perhaps it wasn’t such a shocking move. The question is, will Metal Gear Rising: Revengeance live up to the high expectations set by previous titles? I had a chance to get a sneak peek and find out.It all kicks off in Montenegro. It’s not a jungle in South America, or some secret base falling apart. Raiden’s adventure takes him to many more locations that players will recognise. It’s certainly interesting to witness Platinum’s futuristic view of these locations.

The dialogue itself is not long enough to overstay its welcome, which makes it more bearable to get through the many cut-scenes that it has to offer. Not only that, but the cut-scenes have seen a major improvement when compared to previous Metal Gear titles. It’s all thanks to the script being coherent enough to keep players focused on the story and eager to know what will happen next.

It’s not a Metal Gear story without a group of unique characters, and Rising has plenty of those on both sides of the battle, starting off with the bizarre doctor who helps Raiden throughout his mission. Raiden has a whole gang of operatives, and in true Metal Gear style, he can communicate with them at any moment.

Anyone not familiar with the Metal Gear video-games should probably go through the various tutorials. In fact, even those who know about Metal Gear should do it. This is a whole new direction for the franchise and so there is a lot to learn about.

One of the key differences is the fact that Raiden’s adventure focuses primarily on physical combat. Raiden is still able to equip secondary weapons such as rocket launchers; however, the use of blades like his trusty katana is the main way to fight enemies.

Rising makes use of two buttons to give players the opportunity to pull off various combos. It’s fairly easy to pull these off, and it’s possible to unlock more with progression. This is not a typical hack and slash, however, where attempting to defeat enemies by bashing buttons will result in countless player deaths. Combat in Rising is all about holding back and watching the enemy’s movements, then exploiting any weakness by making use of all the various combos. This was a valid strategy that worked well throughout my play session. It felt satisfying to pull off some of the more advanced combos and witness the amount of damage they dealt.

Perhaps it’s the emphasis on blade fights that makes it hard to comprehend why there isn’t a standard way to block or dodge attacks. Instead it’s necessary to continue attacking, which can block attacks if you time it right, or you could run and jump to avoid strikes altogether. It’s a strange decision, but not one that had a major negative impact whilst playing. It just makes it harder to adjust to the fighting style that the developers want players to use.

It wasn’t so easy to get to grips with locking on to enemies, either. The target system seems to work by locking on to the nearest enemy. The only downside to this is when there are various enemies nearby and it gets somewhat confused about which one to lock on to. Locking on to an enemy also produces some awkward camera angles. 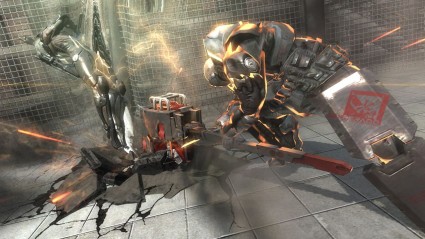 Bringing the pain: one of the many tough cyborg enemies that Raiden will face.

Metal Gear video-games are well-known for being about stealth. Rising continues this tradition, but it’s clear that Platinum Games wanted to reinvent the formula. At first it seems like there isn’t much of an opportunity to progress without alerting enemies, but it’s surprising to see that is not the case after progressing to later missions.

The fact is that Platinum decided to give the player a choice. One example sees Raiden being given the task to obtain an enemy’s fingerprint information, so he can open a gate. It’s only possible to do so by sneaking up behind the unsuspecting soldier, which isn’t an easy task. It involves careful planning and observing walking routines. The mere sight of Raiden will make them raise an alarm, and then it’s only possible to progress by fighting them, or being able to hide for a certain amount of time.

The beauty of this is that it’s not necessary to grab the enemy’s arm to obtain the information to open a gate. He can force his way through, but at the expense of raising an alarm. Many would argue that this isn’t a true Metal Gear experience, but the fact is that previous Metal Gear titles didn’t appeal to everyone because of the heavy focus on stealth elements.

Those eager to play-through the game without alerting enemies can still do it. It’s a difficult task to accomplish, since the areas explored will leave Raiden exposed for a lot of time, but this just makes it even more rewarding to get through each challenge that it throws at you.

Going into blade mode will make it possible to pull off some destructive attacks. This only happens when a blue bar at the top left corner is fully filled or the player pulls off certain combos. It seems fair to include the blue bar, so you can’t take advantage of such a destructive attack too much.

Raiden’s reaction speed seems to increase when blade mode gets activated at the right time. What unfolds is perhaps the best example of Platinum’s trademark over-the-top presentation. Enemy body or armour sections will start glowing when they receive enough damage; activate blade mode and Raiden can literally cut off these sections.

Every swing from the right stick will result in another on-screen cut. Go crazy with the stick and it will literally result in that section being cut to pieces. It’s possible to also destroy most of the environment and perhaps even use it to the player’s advantage during fights. Another over-the-top scene (triggered by the left stick and a side bumper) sees Raiden literally jumping towards an enemy, by utilising incoming missiles as steps. Timing is everything and Raiden must stay next to an enemy, as it’s not possible to move him whilst in this mode.

It ends up being a worthy payout since it teaches the player to try to fight effectively to build up to the grand finisher. In fact, a small square shape will appear inside an enemy, whilst making use of the blade mode, and Raiden gets rewarded with a large chunk of health, if it’s hit and a button is subsequently pressed. Anyone capable of such a feat will feel rewarded for all those hours attempting to learn how the system works.

Level design feels fairly linear in the beginning, which is understandable considering that it’s a radical change and Platinum probably wants to get players settled in. Fortunately it opens up in later chapters with a few alternative routes to explore. Stealth becomes more prominent, since those that can sneak around will end up avoiding some truly challenging battles.

It’s probably not wise to avoid a lot of battles, however, since it might mean earning less BP. BP is the currency used to buy new performance enhancements and weapons. It’s not a revolutionary idea but should prove handy when playing some of the tougher missions that players will surely face in the retail release. What is clear, though, is that everything purchased in the play session is of use. An increase in the blue bar made the powerful blade mode more effective.

Another key element is Ninja Dash which makes Raiden perform certain actions automatically, such as sliding through a narrow gap. It also makes Raiden run faster, which is handy during fights, since it is also possible to attack enemies. It works really well and provides the player with a functional skill against the tougher challenges found throughout the play session. 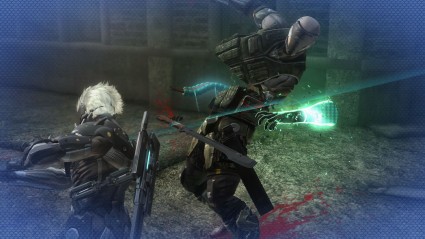 Another cyborg is cut to pieces.

Augment mode is also provided as a tool for players to easily identify clearly marked targets, such as enemies and any hostages in the vicinity. It wasn’t exactly used that much throughout the time I spent playing it, except for a particular section where it’s used in a rather clever manner. Describing this section would inevitably spoil it for the player, so let’s just say that it worked.

Cyborg enemies are many, and most of the time spent playing Rising consisted of clearing waves of them. Each mission had different types of enemies to face with their own unique attack patterns. It certainly managed to pit Raiden against some powerful enemies in a short amount of time. Definitely watch out for some of the more touchy enemies who like grabbing on to Raiden a bit too much.

The bosses in particular were charismatic and put up a hell of a fight. The only minor setback noticed is the somewhat limited number of attack patterns for each boss. This made it somewhat easy to guess their actions; however, it doesn’t mean that it’s not enjoyable to battle with such unique characters.

Even the initiated will find that death is an inevitable side effect of challenges ahead. Fortunately it doesn’t meant starting all over from the beginning. There are a lot of checkpoints and it often means losing almost no progress at all. There are also support items found throughout missions that will aid players.

Those wondering how Rising fits in the Metal Gear universe will enjoy some of the surprises in store. There are certain nudges to previous Metal Gear video-games that will please fans. Again, it’s not fair to go into details, but it is all part of the experience.

Platinum Games’ take on such a cherished franchise is nothing short of inspiring. If anything, the few hours spent playing it proved challenging, but this tough love approach will effectively get player trained for the challenges ahead. It also feels deeply rewarding to understand the fighting system and get through the tougher fights. Metal Gear Rising: Revengeance is certainly a fascinating new direction that could potentially earn itself the respect of fans and attention of other gamers.