Hands On: The Darkness II

If you don’t know, The Darkness was a video-game by Starbreeze Entertainment, based on a comic book with the same name. It told the story of Jackie Estacado and what he had to do in order to control the gift and burdon of The Darkness, a strange, devlish power that resides within him.

The sequel, by Digital Extremes, occurs two years after the events of the first game, with Jackie now being able to fully control his Darkness powers, but it wouldn’t be a sequel without something going awry, would it? Jackie will face his worst nightmares yet again, but will he be strong enough to defeat them and keep everything under control?

The first demo starts off with Jackie entering a posh restaurant. Jackie has moved up the ranks since the first game, thanks mostly to his Darkness powers. He’s busy flirting with his two favourite girls, when a vehicle crashes through killing both of them instantly and seriously injuring him in the process. People get slaughtered left and right as Jackie struggles to regain consciousness. The first game wasn’t exactly a day at Disneyland but Darkness II is clearly more brutal. Tutorial commands are cleverly introduced by asking the player to do certain actions while crawling away from danger.

I felt the adrenaline rush that Jackie must have felt while dragging his injured body away from danger. The aim is not steady either, which is only natural as Jackie is in a lot of pain. At some point, Jackie makes it to the kitchen where another deadly trap awaits. As a fire gets started by a gas leak, Jackie has no choice but to let the Darkness heal him. It was here that the demo began to pick up the pace, as it was possible to move freely once Jackie was back on his feet. This next section of the demo focused on familiarising players with the Darkness powers.

It’s safe to say that the Darkness powers have evolved since the last game. There’s two demon arms that materialise behind Jackie, Grabby (as he’s now named) is able to pick up items, such as poles, that will impale enemies. It’s incredibly easy to grab an item and impale an enemy due to the superb aiming system.

This demon arm comes in handy in other situations, where you could grab something to create a makeshift shield, making it possible to avoid being hit by bullets whilst on the move. It seems like a simple concept but it’s incredibly helpful as it means not having to stick to a permanent cover. It also means that gun fights are not drawn out for what feels like hours. Such cover items include vehicle doors, and they are not wholly indestructible, so best to use them wisely.

It’s also possible to grab enemies and viciously rip their bodies apart. Never has holding someone’s life in your demonic tentacle arms felt so real. Enemies will beg for their life when they are being held captive, which is a somewhat sadistic but realistic approach. 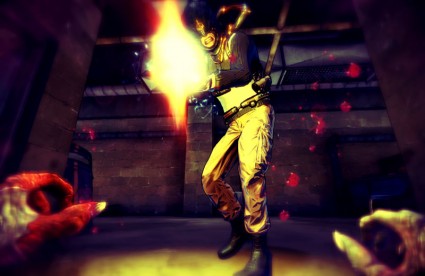 Slashy is able to attack enemies and execute them in very graphic manners. On a basic level, Slashy will whip enemies and is even able to rip them apart, while sneaking up behind them, Slashy will make it possible to instantly kill them. While killing enemies is satisfying on a few occasions, it is also important to do it so to regain health. As in the first game, this is done with the demonic arm creatures feeding off energy found in human hearts.

There are new types of hearts that the demonic arms absorb which give them new abilities. A black heart ripped from a very devious individual, made it possible to create a vacuum vortex which killed anyone that came into contact with it. An effective way to clear out a room full of enemies, as it means sitting back and watching them get sucked in to their timely deaths.

The Darkness is not just about demonic arms ripping bad people apart. It also has plenty of gun fights. It’s possible to wield two guns at the same time but it comes with a price. Holding one gun will make it easier to focus more effectively when it comes to aiming, though there are advantages to using two guns, such as when dealing with many enemies.

What is fascinating, though, is that it is now possible to use both demonic arms and guns at the same time. This might seem like a recipe for a major disaster but it works. At one point in the demo I found myself holding a vehicle door as a shield while returning fire and hitting nearby enemies with Slashy. It’s refreshing to have such a unique combat system in a world where similar actions are not done at the same time.

Spread throughout the demo level were short glimpses at other parts of the story, but it’s still early days so it’s likely that some of the story elements get changed around. The demo took Jackie through a run-down street and an adrenaline fuelled walk down in the subway tunnels. Not everyone can say that they survived a train derail but Jackie just shrugs it off and proceeds to explore the carnage left behind. These set-pieces make sure that players are kept on their toes as it’s very difficult to know what will happen next.

Visually the game is very similar to Borderlands. It’s not a bad comparison, though, as it works in making sure all the gory bits aren’t too explicit.

The second part of the demo took place in a brothel where Jackie is meeting a girl to get some information. The girl barely has time to shove a pistol in his hand before the mob start shooting. This section of the game proves to offer a different perspective. The Darkling makes a welcome return and is given a bigger role to play. This peculiar Darkling has a unique look, with its Union Jack flag themed clothing and the tendency to urinate on dead enemies. It can also be used to reach items behind locked doors, such as light switches, since it can enter air vents. It’s possible to actually play as the Darkling which felt very different from the main character. It is a lot quicker and enemies don’t spot it as easily.

Light is still the major weakness for the Darkness and in this game, walking into it is a suicide mission. Not only will it stop the Darkness powers but it also makes it nearly impossible to see anything. This weakness gets exploited efficiently in this sequel by means of crafty puzzle sequences. The mob is well-informed and has positioned several light sources to obstruct the path. To progress Jackie must find the generators powering up the light sources and destroy them in the right sequence. 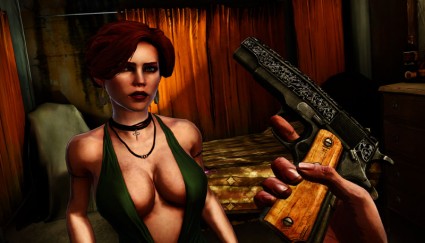 This girl gives you a gun in the brothel. She's obviously packing heat.

It’s in this second demo that new talents become unlocked after purchasing them with experience earned. The experience comes from doing skill kills, such as head shots and other inventive kills. There’s many talents to choose from, but it wasn’t obvious how talents could be used, like I said before; it’s still early days. I can only speculate at this point that the new talents will make it possible to get through sections not yet unveiled.

The demo ended rather abruptly after a short and painful sequence where Jackie gets captured. Not much else to report in terms of the story but it’s looking promising from the short amount of story revealed, with a few interesting twists expected along the way.

It might be a while until release time next year, thanks to the recent delay, but it seems worth the wait as Digital Extremes can work on implementing all the fantastic ideas shown in this demo session.

The Darkness II seems like a worthy sequel, managing to expand positively on areas that needed some improvement from the first game. It’s definitely one to watch out for as further information gets released.