Tennis is not only the favourite Summer sport in England, but also the sport used in one of Sega’s better sports simulator. Virtua Tennis 4 released on other formats earlier this year to a lukewarm reception. Not even the spirit of Wimbledon tennis season managed to save a title that felt like a step back when compared to previous games. The same game will release on the Playstation Vita as a launch title next year, but will it have the same fate?

This version of Virtua Tennis 4 has all the content included on the console version, which is not really a bad feat, considering the amount of characters available. All menu options are present on the build I tested, so it wasn’t possible to try some aspects, like the World Tour.

The first thing to say is that the character models are actually pretty accurate. It’s not only the models that look decent either, as the courts are also looking very impressive on the PlayStation Vita screen. Visuals are definitely one of the best aspects of this version.

Virtua Tennis 4 on the PlayStation Vita is another victim of the need to include features that don’t add anything to the game. It’s possible to play the game entirely using the touch screen, for example, but it doesn’t exactly work too well. The controls are sketchy at best and can even get to the point where they become unresponsive. Basically touching down on a spot will make the character move there. A quick finger swipe in a direction will make it possible return the tennis ball. There is so much that goes wrong with this process that it’s nearly impossible to quickly move around and hit the ball. This is caused by a slight delay in the game reacting to touch screen actions. It’s better to play the game the traditional way, using buttons, since it’s a better experience. 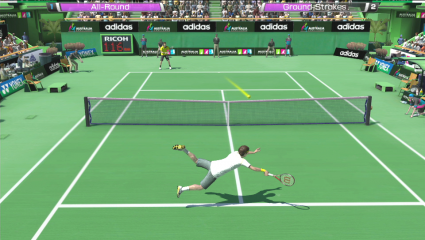 A new addition to the main menu is the Playstation Vita exclusive, ‘Virtua Tennis apps’ tab. In here players will find various mini-games that make use of the Vita’s unique capabilities. VR match makes use of the gyroscope sensor inside the Vita, making it possible to move the camera angle by shifting the console while playing a match in first person. It is an interesting idea but can get confusing as the player needs to use buttons on the handheld and move it around to play.

Another mini-game on the system is Touch VS, which pits two players against each other on the same console. It shows you an over view of the match with each player using simple swipe motions to return the tennis ball. It works pretty well and is one of the best mini-games in this build. VR Cam makes it possible to take photos with any of the professional tennis players in various positions. It’s a bizarre idea but one that could end up being hilarious due to all the crazy possibilities, and hey; it wouldn’t be a Virtua Tennis game without the good old mini-games.

Old school favourites return too, with the one on show having you hit targets on a boat with the tennis ball. The apps section of the game is definitely one of the highlights so far, and it will be interesting to see if there’s more to look forward to in the next few months.

Virtua Tennis 4 on the PlayStation Vita is shaping up to be an improvement on the console version, but it’s a massive shame that the touch controls aren’t up to scratch. At least they are optional. The highlights in Virtua Tennis games, for me, have always been the mini-games and it continues to be the same in this new version. This might end up faring better than the home console versions if it manages to continue scoring aces like it has done so far.