Tiger Woods may no longer be everyone’s favourite golfer due to certain off the course antics but let’s face it; the Tiger Woods franchise is as strong as any of the EA Sports titles out there. Since 1998 the worlds most recognisable golfer has endorsed the game that any and every armchair golfer knows and loves.

The series is second to none in terms of its realism and presentation and like all the other usual suspects (FIFA I’m looking at you) tries to convince us all to part with our hard earned cash every twelve months with some polish and a few extra game modes. This year is no different and I have been spending a bit of time with the great man to find out what makes this years game different.

The first thing that I must say is that I have not bought a Tiger Woods title since the 07 model and yet I still knew and was comfortable with the feel and control of my golfers swing from the off. This has been tweaked ever so slightly over the years but from last years version the difference is minimal. Likewise graphically, the game looks superb, there is a little more polish on the golfers themselves, a touch more detail on the courses and the shadowing effects are just a little more elegant than previous versions. However, this is all minor, but then let’s be brutally honest; it’s Golf, in terms of looks and feel, there aint much you can do with it really. 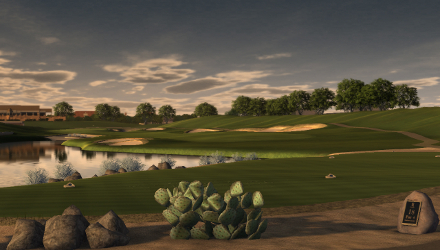 Look it's a Golf Course

As is always the case with a franchise such as Tiger Woods, they live and die by the game modes on offer. The demo gives you a brief line of what’s to come in the full game without letting you test much, such as a new swing tuner, challenge mode and the promise of online Team play for up to 24 players. For the sake of this article though we’ll stick to what the demo does give you.

First up is the new way of developing your golfer. Your golfer’s skills will now be earned and measured in Experience Points (XP). You are told immediately that anything you earn in the demo will carry forward (a nice touch) and these can be earned from the off by sending a live message to your buddies to ask them to download the demo. They are also gained for every shot you play. Hit the fairway; get XP, hit the green; get XP. Want a big bonus? Hit an eagle or a hole-in-one; you get the drift.

The second big thing is the Focus meter. This sits in the HUD and works as follows. You play well and in return your focus improves. With it you can utilise the old power boost and spin boost power ups we all know and love to improve your round (and ultimately gain more XP). Be warned, however, as using the boosts and the putt preview camera reduce your focus, and when you have none, you cannot use the power ups, often leaving you an impossible putt with no guide to help line it up, which ultimately causes you to three or four putt the hole at a major cost to your round total and those ever important Experience Points.

The  other newbee you get to utilise in the demo is the True-Aim mode. Billed as First Person Golf this takes away your option to follow the ball’s flight and makes lining up shots more of a challenge. When out on the course you are solely reliant on the crowd to know if you are close, far or in the sand until you line up the following shot. You do have your GPS which will allow you to view the distance to pin as well as any hazards out on the course and can, if you want, pull up a caddie tip (though in true TW fashion these are about as useful as a chocolate teapot).

With this mode, you can play three holes of match play with a generated golfer on either the 2010 Ryder Cup course, Celtic Manor or the Picturesque Liberty National in New York. Complete with the usual hole “fly by”, commentators tips and “Get in the hole!” shouts from the spectators.

The other game mode available in the demo and probably one of the biggest selling points this year is the Ryder Cup itself. You pick your side (Europe of course) and are given a team of four. McIlroy, Poulter, Casey and Rose line up for Europe. Weekly, Kim, Furyk and, of course, Tiger for the US. Set the number of matches for each discipline (Foursomes, Fourballs, Singles) and away you go. Again you have three holes per match and if there is more than one match you can choose which one to play and which golfer to play as.

Control wise, as touched on earlier, nothing much has changed. Your swing is still on the left stick with your right stick used to set elevation. B will allow you to zoom in to your target area or bring up the holes GPS details when in the True-Aim mode. X allows you to cycle the shot types and A is utilised for the much used power and spin boosts (if you have some focus), LB and RB control your draw and fade respectively and LT and RT cycle your club selection.

What you get from the demo is the idea that this years added features on the whole are pretty good ones. The chance to play the Ryder Cup (and kick some US butt) is definitely a plus. True-Aim, though a good addition will be utilised by the hardcore only to increase the challenge and it remains to be seen if the other additional game features can add enough to make the title worthy of purchase for anyone with last years version. My overall feeling is that with the prospect of gaining some XP over the next six weeks to give myself a boost from the start, I may well be spending a bit more time with the Tiger Woods 11 demo prior to when its release on 2nd July.