Team Talk: Looking back at Doom 20 years on

It’s now 20 years since the seminal title Doom was released. Ignoring the depressing thought that so much time has passed for those of us who remember playing it the first time around, what memories do the TIMJ team have of the title that spawned some of the biggest shooter game franchises now out there?

I first played Doom on a pirate floppy disk rammed into an enormous ‘laptop’ my Dad stole from work. Having played Wolfenstein 3D a few months before, my 7-year-old self thought he’d played the best FPS ever. He was so wrong. Doom rocked my world. It was my first taste of true, bloody gaming and I loved it.

Spool on 15 years and we’re still playing games where we’re essentially a silent gun on a stick. Whether that’s positive or negative is a matter of opinion but there’s no denying Doom kickstarted it all. Even now, through the magic of various emulators and updated editions, millions of people can enjoy the granddaddy of first-person shooters, and it’s still better than Call of Duty: Ghosts. Probably. 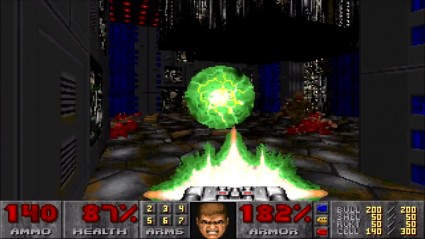 The BFG, one of the great FPS guns. Wonder what that F stands for…

Phil Ubee (Staff Writer/Sports Specialist)
When Doom first arrived on the scene I was strictly a console boy, largely playing football games with my friends on a Saturday (some things never change), and as such had very little early knowledge of it. My earliest recollection was hearing friends talk about this new game they had and how scary it was. ‘Yeah right’, I thought.

Despite all this talk, it actually wasn’t until several years later that I actually had my first hands-on experience with Doom and a few other games had come along trying to emulate its success. Sitting in my bedroom I loaded the game everyone had been talking about for years, expecting that more recent offerings would now show it up as over-hyped. What I got was an experience which I can only liken to a kind of interactive horror movie. I don’t think I will ever forget that initial experience or the fact that my mum actually came in at one point thinking I’d hurt myself as I literally jumped out of my chair, when as I slowly walked through the corridors this ugly-looking monster took me entirely by surprise.

In the modern era we look more and more at how a game looks rather than how it feels, and my underlying memories of Doom have always been of the atmosphere it created. That trepidation as you explore not knowing what will attack, or when. 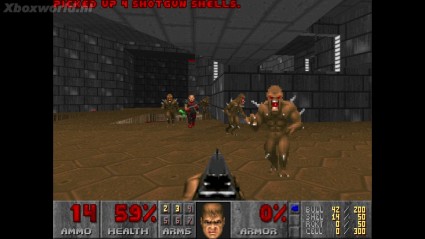 Low on ammo and plenty of enemies: the only way this could be worse was if the lights went out.

Neil Hickton (Podcast Producer)
I was a little late to the Doom circus, though perhaps not as late as some of you by the sounds of it. It was many moons ago when I was at college, in a little comic shop that I used to frequent to buy copies of Groo and other lesser-known comic book titles. I spied one day a few boxed games for PC, and one of them was Doom that came with extra discs containing more levels. My mum had bought a PC for business and I’d decided, to my youthful delight, to play games on it when she wasn’t looking. Sorry mum!

I’d heard great, unbelievable things about its precursor Wolfenstein 3D a few years prior to owning Doom. Having played side-scrolling games on the Amiga I just didn’t believe this “3D stuff” was really possible and that my mate, who owned a PC, was extending the truth somewhat. It wasn’t until I installed and ran Doom for the first time that I realised my friend wasn’t stretching the truth at all.

The first thing that struck me was the level of immersion. Completely unlike other games I’d played up to that point, the viewpoint and gameplay jangled on my nerve endings; I loved it. I’ve played the opening level of Doom many times, not just on PC, but also on the variants that have come since on console: N64 and Xbox 360, to name a couple.

More recently I bought Doom 3: BFG Edition, reviewing it for the site. Going back to the original Doom game is like going back home to your parents; it’s welcoming, comfortable and the décor is a little old school. Doom turning 20 is a little shocking to be honest; it’s amazing to have been able to experience the evolution of games in my lifetime and I kind of feel sorry that kids won’t experience that for themselves to some degree. Doom’s twenty year milestone rings a large bell, signalling I’m growing older, but I wouldn’t have it any other way. Doom for me is still as playable now as it ever was. 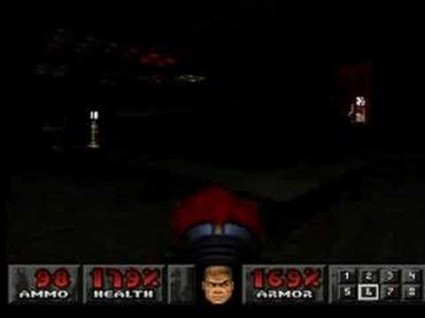 Someone turn the lights back on for the love of God! ARRRGH!

Neil Hughes (Site Manager)
The world’s worst-kept secret is that Doom gave birth to the first-person shooter genre as we all know it. I’m not sure if that’s a good or bad thing, but you cannot deny just how influential this game has been.

Battling hordes of invading demons from Hell might sound like the norm in 2014, but way back in the 90’s, life was quite different. I seem to recall waving goodbye to my beloved Amiga 600 and buying my first proper PC which was colossal in size, but most importantly let me play Wolfenstein and Doom.

Back in a time where Netscape Navigator and AOL Discs fell out of every magazine you brought, and we’d enjoy the sweet sexy sound of a US Robotics 56K Dialup modem connecting to the internet, Doom was the game that introduced me to PC gaming.

Sat in a dark room with my headphones on, I vividly remember being completely immersed in the world of Doom, jumping out of my skin and looking over my shoulder on a regular basis. 20 years on and I’m much older, but gaming is still a massive passion of mine and I owe at least part of that to this landmark game from the iconic id Software.

Andy Buick (Podcast Co-host/Staff Writer)
While it marks me out as not being much of a spring chicken these days, I was ‘lucky’ enough to be a fairly established young gamer when first Wolfenstein, then Doom, first came to the PC. Wolfenstein 3D may have introduced us to the first-person, three-dimensional perspective that we take for granted in games now, but it was id Software’s follow-up Doom that really nailed the gameplay, allowing you to move freely through each level.

The great thing about Doom, though, is that it can be remembered for so much more than the game style it popularised. Here was a game dripping with atmosphere, a triumph of level, graphics and sound design. This was the first game to truly raise the hairs on the back of my neck as I made my way through darkened areas wondering when a monster was going to appear, grunting sounds indicating it was likely to be sooner than I’d like.

I often played Doom on a friend’s PC and his favourite trick was to leave the room and then sneak back in while I was engrossed, so he could make me jump when I was at my most tense. This was something which worked far too many times, which just goes to show how effective the game was. It may not look like much now, but the thought of going back through that world makes my palms sweat even now all of these years later.