For the past decade or so The Creative Assembly’s Total War series has sat pretty high, if not at the top of the food chain of RTS games. As a genre, RTS remains something of an enigma to console gamers but remains a stalwart of PC gaming. The Creative Assembly are one of the key reasons for this.

Next up in the Total War series is Rome II, scheduled for a late 2013 release (almost ten years after its predecessor) and, at this year’s Eurogamer Expo, Lead Designer James Russell talked us through some of the work the team have already done.

James told us that one of the key factors in choosing Rome to do a sequel was requests from fans, and with it being one of the favourites of the development team too, it became an even easier decision to make. The presentation itself was focused primarily on the work that goes into making a Total War game, but did finish with a battle sequence on a very early piece of code.

I have to start by saying I am not really a PC gamer and have had no direct experience with any of the Total War games. However, the RTS genre is one that I have very fond memories of, and back when PC gaming was a little cheaper I was a huge C&C fan, so I was interested by how far it has come. 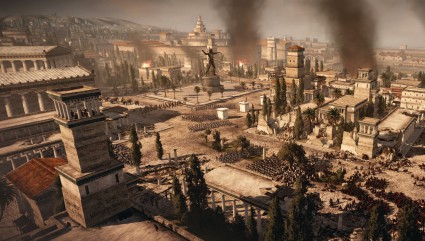 Worlds will be bigger than ever.

We were told that Rome is a good setting for a Total War game as it presents the development team with a natural balance of Empire building and Epic battles. This sequel will look to add a little more freedom to proceedings by allowing more diverse battle options, while putting more emphasis on the individual as to whether they choose to Save the Republic or build their own Empire.

We were then told that Legions will be more transferable than ever before and also more interactive. As an example, fleets of ships may attack from the water initially but then deploy foot soldiers as they reach land. James also told us that this time, Cities will have multiple capture points to allow the player extra freedom to form their attacks, another big step forward.

Then we got onto the techie stuff. The graphics have been upgraded to a phenomenal degree from the original Rome game and should even be a big improvement from Shogun II. The developers have added more polygons and more animations, added facial animations and captured more sound than ever before. In fact, to see the level of work that has gone into making Rome II is a real eye-opener.

We were lucky enough to be shown some of the techniques used to capture animations and beyond that, the process that goes into linking all these animations together. It really highlights the depth of planning and detail in making a modern video-game.

The session was rounded off by a relatively short clip of an attack sequence that saw your Romans attack from sea, deploy to land and then storm a City. Despite being incredibly early code, the world looks beautiful. Draw distances (from this showing) are going to be absolutely incredible, and the transition from up close and personal to a more distant view is seamless. The world certainly stood out more for me than the individual characters, though, and the battles at this early stage, with water and sky effects, looked as good as any currently released titles. 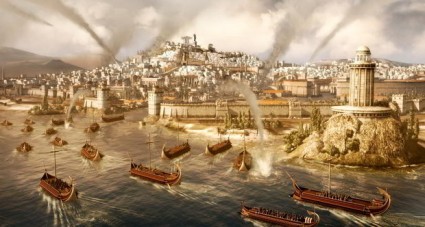 In the Q&A session that followed, James confirmed that all playable factions will be available from the start of the game, but as yet won’t confirm how many that will be. He also reiterated that The Creative Assembly will not port any game to console and Rome II will be a PC exclusive, though he was also keen not to rule out a console game at some stage in the future (next-gen maybe?).

The final point was to play down concerns that Rome II may be unplayable on lower spec machines. James stated that the team aim to keep minimum spec the same as it was for Shogun II, while trying to utilise what the current technology of high-end machines can add to the game for those who invest in the kit.

Overall it was an informative presentation that certainly opened my eyes to some of the techniques used in modern game development. I am pretty confident that fans of the series will be blown away by the results, if the early code is anything to go by.