I like to think I’m reasonably good at gaming, and am always up for a challenge. So having recently completed Hotline Miami, I was game for another toughie. Time for me to take on A-Men 2 then…

There’s not really much of a story here; supposedly the enemies you’re destroying are “A-Droids” but there’s no narrative to speak of. You just get some hammy sequences featuring the characters before each set of levels, of which there are four. Really they could have just skipped that altogether and the game wouldn’t have suffered for it.

‘Ard as nails
A-Men 2 is a puzzle-platformer that tasks you with killing a certain number of enemies each level before making it to a waiting helicopter. It’s a fairly straightforward premise, but that’s where any sense of easiness ends. This game is very hard, to the point of frustration more often than not.

Killing enemies largely requires manipulating traps in the environment as only one character, the soldier, has weapons that can be used to kill them directly. Of course, these traps can, and will, kill your characters as well on a very regular basis. The enemies also kill you outright, so precision and care are paramount to completing each level.

One mistake will result in instant death, and will see you starting the level again. I found some levels took me a good hour or so to get through and given the number of levels in the game, this means to complete it will require some commitment. Larger levels do have save points, although saving impacts your score at the end of the level. To be honest, unless you’re absolutely desperate to get the points I would save often should the option be there, as having to restart a large level is very annoying.

This wouldn’t be so bad if there was a reasonably gentle learning curve, but the game starts hard and just gets harder. There are hints on some levels telling you what the characters can do, but in no way do these help you figure the level out, and this in itself can mean you spend some time just moving the camera around the level trying to figure it out. To me a game shouldn’t be tough because it’s obscure, and that is how it sometimes feels.

A lot of the puzzle elements involve hitting switches or turning power on to different devices, but there’s no indication as to what a lever will do, or which device you’re powering on until after the fact. Levels are larger than the screen, so this can result in one of your offscreen characters being killed because you might have enabled a lift which allowed an enemy to reach the character without even realising. There’s simply too much trial and error involved because of this, and I often found myself desperately moving the camera through the level trying to find out just what I’d done.

Now despite that, it isn’t all bad. It is actually rather satisfying completing each level, as there is plenty of scope to stretch your brain, especially if you want to do more than just complete the basic goal. In particular lining up a good trap to take out multiple enemies at once feels rewarding. In how it plays, it reminded me somewhat of the likes of Lemmings and Humans, although with the difficulty level of Hotline Miami.

In fact, given the nature of the game (here’s a level, figure out how to kill the people in it, high difficulty), I can’t help but compare it somewhat to Hotline Miami and the comparison isn’t a favourable one. Hard as Hotline Miami is, it’s never frustrating, keeping the pace fast so that dying isn’t too punishing, while also making sure you learn from each death. In A-Men 2 though, dying can lose you a decent amount of progress and sometimes it’s just down to a simple mistake, which means you’re not really learning from it either. 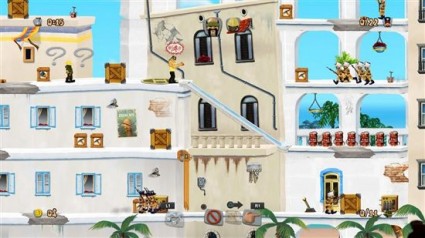 The muscle-man wasn’t the only one swearing…

Each of the five playable characters has 3 specific skills, and you will need to rely on these different skills to get you through each level; although, you will only have some, or on occasion just one, of the characters at your disposal. The skills make sense for the different characters, with the spy being able to disguise himself so he can move freely amongst the enemy, or the muscle-man being able to lift crates.

Skills can also be upgraded with money you earn per level, although when I went to do this I got a message telling me I couldn’t buy any skill upgrades without getting a ticket from “Near” (I was playing on Vita). This is something of a mystifying move, since it presumably relies on others in your area having the game as well, and leaves you only able to buy clothing for the characters otherwise, which is of no benefit at all.

Talking of money, how much you earn per level depends on your performance in that level. At its most basic, you just kill ‘x’ number of enemies to complete the level and that seems to get you a C grade. However, if you complete some or all additional targets for that level, such as killing all enemies, or beating a time limit, then you’ll get a higher grade, and more money. There are also collectibles in each level which again will improve how much you get.

Awkward animation
The cartoony graphics are nice enough, especially on the Vita screen. There’s certainly no cause for complaint there, although I found the animations of the characters slightly odd, particularly the way they jump which seems rather stilted. There’s some comedy to be had from watching enemies being blown up and flung across the level, though.

Aural assault
The sound isn’t much to write home about. It’s functional, and the music changes to alert you that one of your team has been spotted by the enemy; but then then there’s the character soundbites…

Because there isn’t really any story to speak of, the developers seemed to feel it was necessary to give their characters some “comedic” one-liners. These aren’t funny the first time you hear them, and when you’ve heard them for something like the hundredth time, any initial sighing at the terrible humour will likely have turned to genuine irritation.

To put this in context, you have a muscle-man who quotes platitudes about the nature of war (because a strong guy being clever and sensitive is funny, and has never been done before); then you have a commando who’s a total coward and comes out with lines like “Maybe some other time”, or after using his grappling hook, “Better than Batman!”. Really my friend, you’ve got that one terribly wrong I’m afraid. The engineer relies on hugely irritating sarcasm, and the spy breaks the fourth wall by constantly wondering if he’s being controlled by a greater intelligence. To be fair to him, if my ability to play this game is anything to go by, perhaps not…

I’ve perhaps been a little mean there, but it’s safe to say I would rather the characters were mute. The soldier, at least, isn’t quite so annoying though. 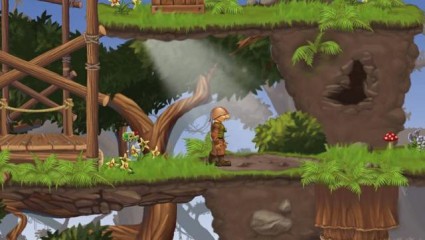 The soldier, Atom. I can’t help but think an opportunity for an “up and Atom” style joke has been missed. Maybe there was one and I just erased it from memory.

Amaze your mates
Online, you can compare your scores with your mates and the wider world, but that’s all you get in terms of multiplayer.

A-Men to that
There is a good game in here; it just hasn’t been fully realised. Because it’s hard, completing each level brings with it some real satisfaction, but there’s so much frustration to be had during your endeavours to get to that point that it often feels like a slog, and at times that satisfaction is replaced with pure relief. Every time I played A-Men 2, I found myself putting the game down after a couple of levels and not really wanting to go back to it because I’d had enough.

Completing the game would be such a massive time investment that I must admit I never got there (for fear you’d be getting this review sometime in 2015!), but it’s telling that I don’t particularly want to either. While that is largely down to how it plays, I must also mention those awful character soundbites again as for me they made the whole experience even more something to endure than enjoy. Unfortunately the developers seem to have been determined to give each character a personality they perhaps didn’t need. With puzzle games for me it’s always more about how to solve the puzzles; I’m not so interested in anything else, and here it does nothing but detract from the experience.

If you really like the idea of playing a very challenging puzzle-platformer that feels a little retro and broadly in the vein of the aforementioned Lemmings or Humans, then give it a try as you’ll likely get some enjoyment out of it. Though if all you want is to see “difficult” done right, I’d recommend Hotline Miami over this every day of the week.