I was a huge fan of Assassin’s Creed, especially the Ezio trilogy, and then Assassin’s Creed III came out. Sadly I found it to be disappointing, not least because Connor and Haytham failed to adequately replace the charismatic Italian, proving to be rather dull company in comparison.

Rather than moving away from the Kenway family though, Ubisoft made the rather brave decision to make their fourth main Assassin’s Creed game with Connor’s grandfather Edward, a pirate in the Caribbean, as the lead. This has proven to be an utter masterstroke…

Edward Kenway is a man out to make a fortune to take back to his wife by privateering in the aforementioned sunny climes. Initially, at least, he’s not afraid to get his hands dirty, harm anyone who gets in the way or to manipulate people to his own ends. This instantly makes him a more interesting character; here is someone with many more shades of grey who is happy to use the Templars and the Assassins (and anyone else for that matter) to get what he wants, which amounts to nothing more than money and lots of it.

Of course that doesn’t remain the case, but Edward’s story is an interesting one. He takes a long time to come round to more honourable goals, doing so in a believable way. He’s also an instantly likeable and fun character despite his nefarious goals, as well-rounded and enjoyable to play the part of as Ezio. This is good news, considering Black Flag is extremely lengthy and took me at least 30 hours to see the majority of just the single-player. It also helps that he’s surrounded by a very strong cast, most notoriously Blackbeard, all of whom do a great job of sucking you into the murky world of the privateer.

Despite the story, I spent a lot of my time playing just enjoying the open seas. This is definitely when Black Flag is at its best; giving you a boat, the Jackdaw, almost from the start, which you can use to battle enemy ships before boarding them for booty. You can then in turn make use of this to upgrade the ship to take on the increasingly more difficult enemies.

Fortunately the Jackdaw handles brilliantly, and the naval combat is great fun. I never grew tired of fighting on the seas and merrily wiled away several hours just doing this with the aim of upgrading my ship, which in turn I then wanted to test out on bigger and badder enemies. 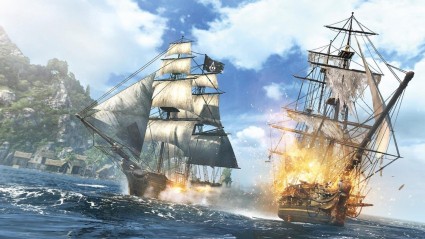 As if all of this wasn’t enough to keep you on the high seas, you can collect sea shanties, and in-between battles your crew will sing from the repertoire you’ve gathered. This may not sound like much but it’s implemented so well that I found myself singing along on many occasions, including singing “What Shall We Do With The Drunken Sailor?” on one occasion in front of my family without realising, until I noticed they were staring at me (I was wearing headphones so they couldn’t hear it playing…)!

This might seem like a small, superfluous touch, but this attention to detail somehow completes the seafaring aspect, really evoking life on the waves and bringing you further into the experience. Especially if you sing along…

As fun as being a pirate at sea is though, it’s not all about the ships. This is Assassin’s Creed after all. There are also three main cities: Havana, Kingston, and Nassau, along with a large number of smaller locations. I didn’t spend as much time in these locations as I’d expected; while they do provide side quests (the usual assassin contracts and finding various hidden objects), you only need go to them if the main story requires.

Unfortunately the main quest in particular is probably the weakest element. There are some great sequences in there and some fairly memorable moments, but there is an excess of trailing people and doing x, y and z without being detected, all wrapped up in the same parkour and fighting mechanics that don’t feel as though they’ve been changed since Assassin’s Creed 3, meaning the usual flaws. I had many occasions where I failed missions due to missing a jump, jumping when I didn’t want to, climbing when I didn’t want to, etc.

To be honest I don’t know how Ubisoft can improve this, but some changes are needed here if the annual release schedule is to continue as they are starting to breed both over-familiarity, and at times frustration. 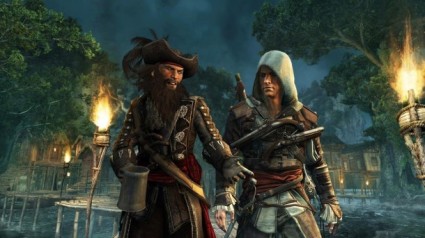 I did also find it slightly odd that all side quests and objects are there for you from the start, especially as some are subsequently introduced later. For example, I’d already completed several Assassin contracts before this ever came up in the main story and at a time when it really didn’t make sense unless you’re willing to accept that it’s all about the money. How did Edward know to interact with the pigeon coops…?

There is another potential excuse (ok, let’s call it an explanation) for this, and that is down to the modern-day sequences. In Black Flag, you’re an Abstergo employee working in their entertainment arm to go back through Edward Kenway’s memories to make an entertainment product. So perhaps it could be argued this was just them making it more fun. The modern-day sections break up the pirating a little, but being a pirate is so enjoyable that it’s not an entirely welcome interruption, although it does allow for some story to be filled in.

Back in the Caribbean, not only do you have a number of side quests on land; you also have shipwrecks to plunder underwater (watch out for the treacherous aquatic fauna as you go), smuggler’s coves to raid, hunting to upgrade your equipment in the vein of Far Cry 3, and a particular favourite of mine: hidden treasure. You really do get a treasure map where X marks the spot. You then go to the grid reference on the map and have to find the treasure using the map. This is a great touch, and either rewards you with a decent payout, or plans to upgrade your ship. 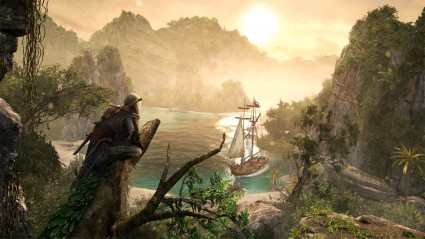 All kinds of pretty

As I’ve mentioned hunting, I must also mention that this stretches to harpooning whales and sharks. You can buy the skins you need to upgrade so you don’t have to do this, and I must admit I found this to be slightly unpalatable so it was something I avoided. If you want to get 100% and the platinum trophy though, you’re going to have to slaughter your way through a few virtual whales.

Whale hunting aside, the sheer richness and variety of extra activities on offer (there are several more I haven’t mentioned above) means that in-between the naval battling there’s a massive amount to keep you entertained, and the vast majority of the time it entertains well.

Outside of the single-player, Black Flag also contains a generous multiplayer suite, including various competitive modes which largely boil down to deathmatch, team deathmatch, domination and so on, but also allows you to build custom games, and has a co-op mode called Wolkfpack on top of all that. 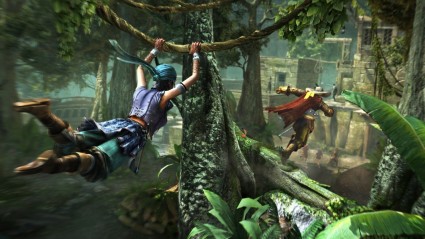 If this is you regularly in multiplayer, you’re doing it wrong

What I’ve always liked about Assassin’s Creed online is that it offers something different in the way it plays from the usual online FPS. Yes, the modes follow similar lines, but to me there is something so much more satisfying about picking out your target, approaching them stealthily, watching your kill meter increase and then finishing them off.

I spent a good few hours playing online and while it’s not massively different from previous offerings, it’s huge fun nonetheless. Considering how generous the single-player portion is, having such a great multiplayer mode as well is almost like having an extra layer of icing on top of the icing on the cake, and who ever complained about too much icing? Not me, that’s for sure.

I played Black Flag on PS4, where a patch bringing it up to 1080p means that the visuals are nothing short of gorgeous. Even my mother-in-law was impressed enough to comment that she wished she was on many of the extremely inviting tropical beaches! Ubisoft has done a great job of making this look next-gen, although there were a few indicators that this was cross-generational such as the character models being noticeably not quite up to the level of Killzone Shadow Fall, and as good as the water looked it still isn’t quite there yet, seeming a little floaty at times (although the storms are amazing). These are, all in all very minor points though with Black Flag in the main being a beautiful game to behold.

If you’re playing on Xbox One this will be 900p, but while that may mean a minor difference, you’re not going to notice while you’re playing and it isn’t going to change the fact this is an outstanding experience.

A pirate’s life for me
I’ve always enjoyed any fiction relating to pirates (perhaps it comes with being a Bristol lad!), but nonetheless I was a little dubious about Black Flag when it was announced. It pleases me no end to say I needn’t have worried at all as Ubisoft have delivered certainly the best Assassin’s Creed game since Assassin’s Creed 2, if not the best so far. With great characters, sumptuous visuals, an enjoyable story, and an utterly remarkable approach to seafaring, here we have not only a generous package in terms of content, but one that in the main is of the highest quality. Some changes are needed for future releases in the series, but Black Flag is so good overall, the weaker elements can perhaps be forgiven one more time.