Atelier Ayesha Plus: The Alchemist of Dusk

It can be a surprisingly refreshing thing to not have to save the whole world from a major catastrophe. Unlike most RPGs, Atelier Ayesha Plus requires you only save one person – just one – and not from some planet destroying monster or calamity, but from an existence outside reality.

This is the setup for The Alchemist of Dusk, but unfortunately the actual game fails to live up to its refreshingly sedate premise. A few questionable design decisions render the entire adventure moot and, if you’re anything like me, will leave you feeling like you just wasted several hours of your life.

You play as Ayesha, a pretty young blonde who starts the game as an apothecary, having taken over her grandfather’s workshop. Before you’re given control, her sister Nio goes missing, and no one has idea why. A few minutes in, though, and Ayesha sees a vision of her sister near her grave, and decides to try and save her sibling.

It is a genuinely refreshing change from most RPGs to simply want to save your sister, as any good sibling would, and it gives Alchemist of Dusk a ‘light’ feel, where you can play leisurely and really explore the world. However, this actually lures you into a false sense of security. 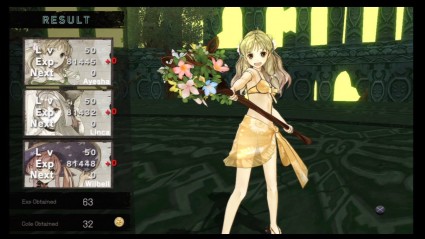 I first thought something was up when I went to the ‘dressing room’, and it immediately allowed me to change Ayesha’s clothes to a bikini and sarong. To most, this would be something and nothing, but the dialogue changed tone in some spots with this outfit on, and since characters keep the clothes they wear throughout cut-scenes and gameplay, it just came off as weird. This was especially true when finding new party members that you can also change into bikinis.

To be fair, that is a small gripe that ultimately has little effect on gameplay, it just kept distracting me in places. A bigger issue is the needlessly deep alchemy system. Now, I am all for depth of mechanics, and this system certainly has that in spades; but if you get too caught up in creating all the different items that the system allows, and then trying to make even better versions of those items, it burns time you simply do not have. You’re never told that, though – it never once says that you have a set amount of time to get the main missions done, or that there is even a hard stop.

You see, everything you do in Atelier Ayesha’s world burns days. So moving from one spot on the map might take one day or it might take eight, and creating items using the alchemy system takes several days depending on the item. The game keeps track of the days, months and years that have gone by via a meter in the top corner of the screen. On the surface, this isn’t a bad mechanic, and just shows how long it will take you to get things done. However, a character at the start mentions that he will give Ayesha three years, with no indication as to what will happen at the end of that time. 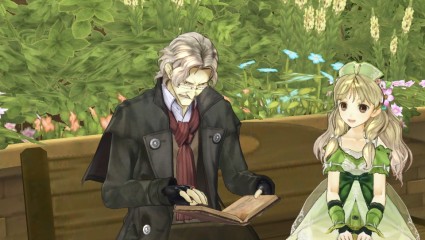 A book so interesting it takes two to read

As it turns out, the game ends. If you have been actually playing, messing around with the alchemy system and completing all the missions and side-quests you find, at the end of three years that character shows up with Ayesha’s sister in tow and states she took too long so he did it for her. Credits roll. This is one of the most ridiculous instances of game design I have ever come across.

The world you are presented with is filled with things to do and places to go, and exploring it can be fun, but if you do that you aren’t laser-focused on the task at hand, and you’re punished for not realising that you can’t simply fool around because it literally finishes itself. Sure, you can restart with this knowledge in hand, but the other mechanics do not help this process, with the aforementioned alchemy system being so needlessly complex that it can actively halt your attempts to complete in the time given.

You can restart and try to be better, try to get through the main story missions early enough so you might have a shot at that true ending, but you will still be fighting game mechanics that hinder rather than help.

The final gripe I have is that writing can be terrible in places, and there is a lot of it. Some scenes are fully voiced while others aren’t. At times it could be that you run into a dialogue scene with no story benefits every five minutes, and each can take several minutes to get through. This also has the added wrinkle of showing that the character you play, Ayesha, is a naive idiot. You can take it as all naivety, but in some scenes she comes across as so stupid that it destroys any serious beats that Alchemist of Dark was trying to play out. 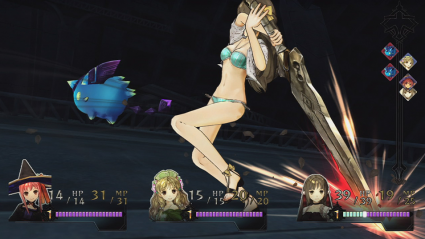 In all fairness, Atelier Ayesha does have some good points. The visuals are really bright and colourful, with some gorgeous environmental art and enemy design – that is, until they just start palette swapping them – and the music and sound effects really fit with the world. The combat too, is pretty cool, though it treads the well-worn RPG path. It is here, though, you get to really see the alchemy in action, and creating all kinds of medicine, boosts and weapons to use in battle is indeed fun for a time. It is also very funny to have three girls in bikinis battling an array of monsters with over-sized swords and bombs, and no one bats an eyelid.

Honestly, no. Atelier Ayesha Plus: The Alchemist of Dusk might have some good points, but the fact that it can finish itself if you don’t meet vague goals with little warning is so completely ridiculous it borders on farcical. Of course, if you have the temperament to restart after it’s deemed you have failed, then you might feel differently than I, but I cannot recommend this when it can leave you feeling robbed of several hours.

I loved the refreshingly down-to-earth premise, but sadly, the game’s sins are so ingrained in the design that only a select few will enjoy while everyone else, myself included, will feel cheated.