Have you ever wondered what it would be like to be Hercule Poirot, star of Agatha Christie’s long-running detective series? If the answer is yes, then here is your chance; just pick up Agatha Christie: The ABC Murders to become the detective himself.

Except, don’t do that. The latest game from developer Artifact Studios does a terrible job of making you feel like a detective at all, let alone one of the most famous fictional sleuths of our time. Add to that poor design, technical issues and some of the worst voice-acting I have ever encountered and it is simply not worth your time or money.

Based on the novel of the same name, The ABC Murders centres around Poirot investigating a series of grisly murders, all committed by someone who calls themselves ‘ABC’. He telegraphs his crimes by sending Poirot letters telling him the date and location of each murder. Set in the 1930’s, you’re tasked with relying on good old-fashioned detective work to figure out who did it from a list of suspects that unfolds as you progress.

The problems start soon as soon as the opening sequence, as character models try to lip sync the fully-voiced script, and fail, terribly. These characters barely even move in a realistic way. I understand that Artifact Studios are not exactly a AAA studio or household name, but this doesn’t exactly help to immerse you in the story and actively throws you out of the experience.

The same can be said of the voice actors, who are almost universally terrible. The only one that seems to have any kind of decent acting chops is the guy playing Poirot. Even with a very dodgy Belgium accent, he can at least vary it up and put a bit more context behind his voice. Every single other person reads the script, and that’s about it. 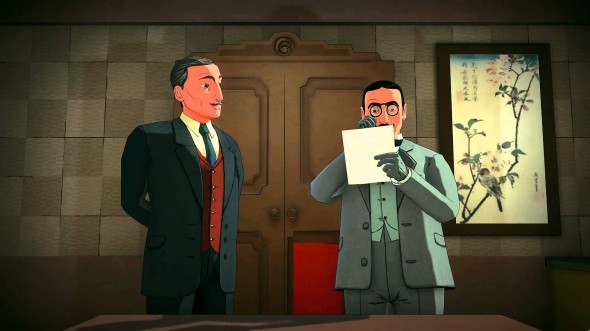 Poirot and Hastings read a letter… apparently this takes two

The voice acting is so bad that when it randomly cuts out except for certain characters in a given scene – a pretty big bug – I just didn’t care. I could have restarted and tried the scene over to get the full effect, but it wasn’t necessary; I got the information required regardless.

Other audio issues plague the experience too. There comes a point in the story where Hastings, Poirot’s sidekick, is sat next to another gentleman. He speaks, then the other man speaks, and it is the exact same voice. There is no change; they just have the same guy reading the lines for both characters in the same way. It is completely stupid, and again, only works to throw you out of the experience.

These exchanges do at least provide you with clues on the killer’s identity and what happened to each victim. They come to a head when all clues have been gathered and it is finally time to answer a big question pertinent to the case, for example, ‘are there any links to each murder?’.

Questions like these are scattered throughout The ABC Murders, but the design of them is boring. It didn’t engage with me on a particularly high level, and in some instances I found that the logic used to answer them has come out of nowhere, assumed to be Poirot using his big brain to figure it out.

Except you are not Poirot, you’re the player and it should be you trying to figure it out, not your in-game avatar behind the scenes. Add to this that multiple clues, given the way they are worded, could answer the given question, but only certain ones will, leave little grey area to give interesting and thought-provoking feedback to the player. You can literally try them all in combination until you hit it right. 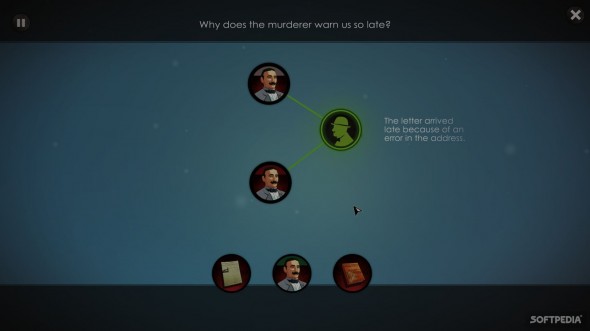 What should have been The ABC Murders’ most engaging parts are the most boring, with other sections feeling shoehorned in to extend run time and show off an artist’s 3D models. During the course of the investigation you are given free rein to rummage around certain rooms, which will give you puzzles to complete. No context is given for this, and it a case of moving the cursor around the screen until you see the icon change for interaction. There isn’t even anything flashing in the environment that might indicate you need to look in a given place.

The puzzles serve no purpose to the story, either, and are literally just there to give the player something to do. I had a tough time believing that some items were locked away behind a mechanism that requires six different little puzzles to be completed before it unlocks. Some of these puzzles are needlessly obtuse too, making these diversions frustrating as well as out of context.

Fortunately, there is a clue system in place that will help. I say ‘help’, but what I mean is that it will complete a section of the puzzle for you. It’s okay, though; so that this system isn’t abused, there is a minute-long cooldown timer on it. This serves simply to draw out the time you spend in a given puzzle, as there is no consequence to using this system, and abusing it is just a matter of patience.

This system also works if you ever get stuck and aren’t sure what to do next. These instances are rare, but happened at least a couple of times. Using a clue made Poirot walk to where I needed to be and perform the next action, making it almost totally pointless even playing. Then again, it would have meant taking longer to complete, so actually playing is in your interest.

Not that moving about the world is quick. I get that Poirot doesn’t need to run everywhere, I do, but the walking speed here is just laborious. Add to that the pointless filler scenes that are simply there to illustrate him getting into a cab to go to another location, and I feel like The ABC Murders could have been at least two hours shorter than it actually is.

This is especially true had all the annoying exposition dialog been removed. Everything that you do is verbalised by Poirot, and it gets to the point where you just wish he would shut up and get on with the case. It feels like they realized they had a decent voice actor in, and so got their money’s worth, regardless of any benefit to the project.

More pointless gameplay awaits in the form of ego points and observations. Ego points are earned by ‘acting like Poirot’, with six hundred to earn in total. These points do jack, as far as I can tell, save for maybe providing a reason to go back through and choose different options when presented with dialog choices. I think it’s a system that is supposed to prove that Poirot is one of those hyper-intelligent people that are also complete jackasses, since all the options that make him sound like a dick give the most points, but it adds nothing of value. 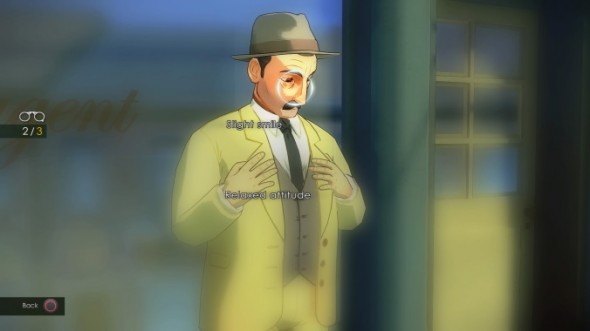 Let’s all stare at this guy. Just ’cause.

Observations are instances where you can watch characters you are about to talk to, gleaning some insight on them. This plays out by moving the cursor over them until the controller vibrates, the camera zooms in and Poirot makes some comment about what you are seeing. It doesn’t change the dialog that comes after it, nor does it provide any gameplay relevance, as these do not even factor into answering those aforementioned questions. Those clues are all provided by talking to the characters.

You can also perform a ‘reconstruction’ of the murder currently being investigated. This is comical because you have to follow what has already been laid out by talking to suspects, hit the right button at the right time, and when you complete it you get Poirot exclaiming how that is exactly what happened. I just always felt he didn’t have enough information to say with such confidence that what happens in the reconstruction is completely correct.

I will say this for The ABC Murders: the big reveal for the killer isn’t telegraphed too far forward, and in a better game would be genuinely cool. Here, though, it just doesn’t hit home in the way that it should, and makes an already terrible game that much worse.

Not helping are the technical issues. The sound cutting out for certain characters in a scene and bad lip sync have already been covered, but I had the game lock up and crash on me. I also noticed some framerate dips here and there, but nothing so bad that it becomes unplayable, but in a game where barely anything moves in a given scene, framerate drops like this shouldn’t be happening at all.

It doesn’t take a detective…

So, what if you love Poirot? That’s nice, good for you. Go read the book, or watch the nineties TV show starring David Suchet, or the movie Murder on the Orient Express. Anything butplay this.

It’s true that Christie/Poirot fans will get more out of this than anyone else, but even that will not shake the technical issues, poor design, a worse script and voice acting where I think even I could do a better job. Even though it isn’t a full-priced investment, there are better detective games out there for the same or less, and those are worth more of your time than this.