What’s the antithesis to the idea that modern games are devoid of colour? Put simply, CyberConnect2’s latest Naruto game, Naruto Shippuden: Ultimate Ninja Storm 4. This is a game that will bathe you in bright lights and pretty colours for as long as you chose to spend playing it.

If you like Anime, love Naruto, or just want a surprisingly solid fighting game, then this is the game you want to play. It’s not without flaws, but I was genuinely surprised by the way it drew me in, even if I had my fill without extensive play of the other modes.

Ultimate Ninja Storm 4’s story is, to be frank, nuts. I have no idea what really went on, there was something about ninja clans, tailed beasts, a world-ending bad guy, and a moral about friendship and working together to beat anything.

I was actually surprised by how this completely insane story drew me in, and it made me want to see the lengthy mode through, even though I actually spent only maybe an hour or two playing the actual game. This being anime, we are talking about Metal Gear Solid levels of putting the controller down to watch cut-scenes.

I haven’t watched much of the Naruto show, but I have seen a few minutes here and there, and Ultimate Ninja Storm 4 does a very good job of looking the same, with the out of engine cut-scenes seemingly taken straight from the cartoon. Aside from the problems with lip-sync, everything sounds great, and the battle effects took me back to my youth watching anime for the first time.

Not all these scenes are that well animated, some are in-engine and some aren’t, with the ones that aren’t featuring characters that have either poor lip-sync or a mask to cover the problem. The in-engine ones have characters talking, but the lip-sync is even worse there, with mouths moving before any dialogue even comes out. 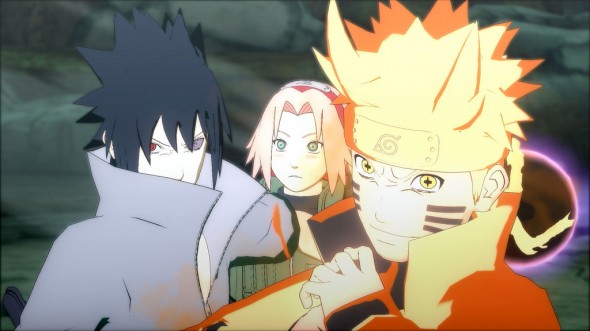 It is enough to pull you out of the experience, but the story kicks in and pulls you back with the craziness that comes with a full-on anime experience. I didn’t play the first few games in this series, but if they are anything like this one it would be worthy trip back in time.

The actual gameplay is pure fighting game and it’s solid, with a surprisingly deep combat system that I didn’t even come close to scratching the surface of. I played on PS4, so hitting circle will do basic combat, but adding in other buttons creates some real spectacle.

By hitting triangle, your character will load ‘chakra’, which basically means they’ll power up for a few seconds. If you time it right, tapping circle will unleash a ninjutsu attack which, depending on the character, can do a few different things. For the most part, it involves launching massive energy balls at opponents causing large explosions. Like I said, anime.

The ultimate version of this is the secret technique, and when I say this looks cool you best believe me. Hitting with one of those will blast enemies with attacks so powerful that the camera heads to a birds eye view to catch the full size of the explosion, and there is nothing more satisfying. You can even do a team-up version, which is even more spectacular, as some fights grant you allies that you can call on by tapping L1 or R1.

I was never able to fully utilize these allies though. At the start of each battle in the story, you are given a task-list to complete. They might range from performing a twenty-five hit combo, to hitting with a ninjutsu attack three times, to knocking an opponent off a wall. When you have allies, these include ‘connect with X persons support attack’, the problem is that I could never figure out how this worked. 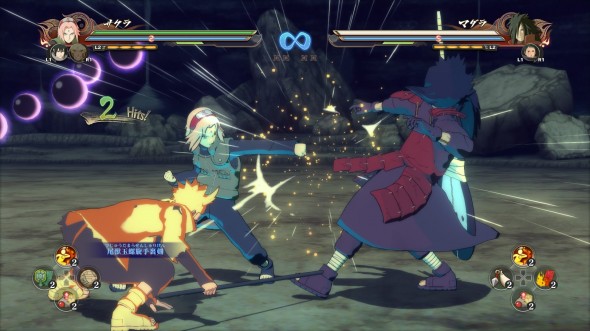 Working together can be tough…

I would get into position, hit L1, my ally appears and hits the opponent, but I never met the condition. I couldn’t work out if because I wasn’t actually hitting, or the angle of the camera was wrong, or something else; it proved very frustrating to try and figure out but fail each time.

To be fair, this is likely me playing badly, but the Ultimate Ninja Storm 4 simply doesn’t do a good job of explaining when best to use this and what counts as a hit with it. Its a problem with a lot of fighting games, the tutorials simply aren’t there, and in order to get good you have to spend hundreds of hours learning everything.

There is plenty to learn too. Cancels, counters, guards, throws, it’s all here, but those large combos I could never pull off; I just couldn’t figure out how to keep the combo going to the point of hitting that many times. I could get into double digits, but never further than fifteen or so, even with the aforementioned super-charged attacks.

In certain instances you can trigger a series of quick-time button presses, which give all the most impressive scenes some agency, though you do miss out on what is happening by focusing on the action you need to perform. Still, by the end of the scene, someone is definitely screwed up, and your brain, if it is anything like mine, will struggle to process what just happened.

I was able to figure out enough to get through the story, and I found that once I had, I pretty much had my limit. I checked out the other modes, but really I had all I wanted out of the batshit crazy story. These modes consist of an adventure mode set after the events of the story, where Naruto takes quests and battles random enemies. Free battle and online battle, where it becomes more of a straight up fighter, and collection mode, allowing you to view stuff you have unlocked.

Adventure seemed like you could spend a good few hours playing, but it just didn’t have the balls-out action and insanity of story, and felt boring by comparison. The battle modes render it down to just the fighting to let you perfect and battle your friends, possibly meaning you can go back through the story and get that perfect S rank, but I’d had enough at that point. 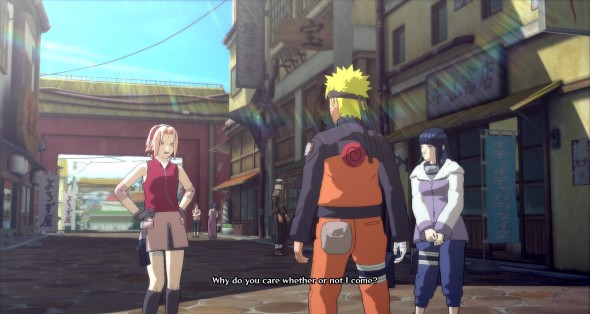 I almost wish Ultimate Ninja Storm 4 was just the story, with maybe the battle modes thrown in as an extra. It has everything I personally want out of this type of game, but has a combat system that has enough depth to carry those inclined to play online.

The biggest downside to the battle system is the fact that the camera can prove unwieldy. Numerous times I ended up with the camera behind my opponent, causing instant confusion when I was tapping buttons but doing something else. A few seconds later I figured it out, but it is a dumb thing to happen in a fighting game.

Yes, I have manual control of the camera, but that’s not the point. Concentrating on fighting means that camera control is a secondary concern, and Ultimate Ninja Storm 4 should do a better job of keeping it focused on the player’s avatar. It’s not the first game to do this, and probably won’t be the last, but it is a problem that should be ironed out as soon as possible.

I would still give this a shot. The fighting system is deep enough to scratch that itch, the story provides a level of insanity few others can match, and there is plenty to do once you complete it, if you find that the story isn’t enough.

It’s not the most stunning fighting game ever made, but I dug what Naruto Shippuden: Ultimate Ninja Storm 4 was doing. It looks cool, and blasts light and colour into your eyeballs with unabashed glee. It revels in fun and might just be worth your time.