Let me get this out of the way up front: Dark Souls II isn’t that hard. Shocking, I know. Is it demanding? Hell yes. Does it require you to pay attention at all times? Definitely, but I do not consider it hard, just a game that requires you to think about what you’re doing and actually play it, and that makes it a bit of a revelation.

Dark Souls II: Scholar of the First Sin is the updated and remastered version of the original Dark Souls II, this time including all DLC and with a visual upgrade to bring it to PS4 (the version I played) and Xbox One. I haven’t played any of the Souls games before, nor Bloodborne, but having put many hours into this remaster, I can honestly say I should have played them well before now.

After just a couple of hours I could see what a special game it was, and the one piece of advice I had heard since the series’ inception was the one that helped me the most: be careful. There are no simple enemies in the world of Dark Souls II; smaller ones maybe, but not simple. Everything is out to kill you, and given half the chance it will, swiftly and without mercy.

They hit hard, but the way animation is set up is such that if you do in fact pay attention, you can see each attack coming – even bait them into attacking, before moving out of the way, waiting for the animation to finish before countering. The combat becomes satisfying every single time as you become skilled at seeing the tell-tale signs of impending attack and can then react accordingly. It rewards you for actually playing in this way; if you don’t, it punishes you mercilessly and without regret. 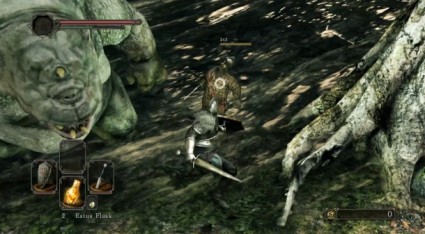 Be just as concerned about each of these guys…

Death comes quick to those who play half-heartedly, and, to be fair, it does the same for those who don’t – you just have more of a chance to survive. You will be seeing ‘You Died’ a lot during your time with the game, as I did, but I never felt anything other than the following two things: I just lost a ton of souls, and it was my own fault. Scholar never feels like it hands out cheap deaths just for the sake of killing  you. If you die, you hadn’t prepared correctly or didn’t evade at the right time. You might even have lost track of your surroundings and fell off a ledge. The information to survive and the ability to do so is all there in the game; whether you take advantage of it or not is up to you.

When you do die, you become ‘hollowed’. This means two things. Firstly, you cannot see summon signs which grant you the ability to call in NPC help for bosses and tough areas. Secondly, it means your maximum health lowers a little each time. So you can start out at 100% health, but after the first death you get 95% max, then 90%, then 85% and so on down to a maximum of half your starting health. This affects you in multiple ways, because not only are you severely limited in your ability to survive encounters, but you have to use more consumables to keep your health up and burn through them more quickly, hurting you later in the game.

Of course, you can reverse this state using a consumable, but they are few and far between, and are best kept for the really tough encounters such as bosses. There is also a ring you can get that limits the effect so you drop to 75% maximum health, again proving that everything to survive is in the game, you just have to find it.

Each enemy killed gives you souls, which act as a catch-all currency for the game. You use souls to buy new gear and consumables, upgrade existing kit in conjunction with another consumable, buy spells and level up. The problem here is that the absolute lack of hand-holding means working out exactly how you level up and who the merchants can prove difficult to figure out, putting players a disadvantage for some time. Checking every nook and cranny, talking to everyone you can and generally exploring will solve this problem, but I know that is not to everyone’s tastes. 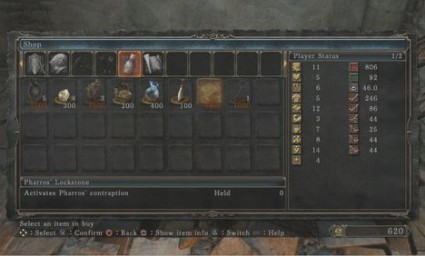 If you die, you respawn with all your accumulated souls gone. Return to the area you were killed in though, and a glowing ball of green light awaits, allowing you to pick up your lost souls and effectively start from where you left off. The downside is that if you die again trying to get back to that point, you lose all of the previously acquired souls. Let me tell you, there is nothing more painful than losing several thousand souls because you mistimed a counter.

When you do level up, the screen to do so can be overwhelming at first. It presents you with a series of attributes you can increase on the left, which then affect about triple the amount of attributes on the right hand side of the menu. Again, the lack of hand-holding means that this can be a really confusing mess to those that aren’t statistically. If you increase dexterity and strength, you can wield more powerful weapons whilst also increasing health. Increasing vigour just increases health, whilst endurance increases the stamina bar which must be managed to be able to attack or evade. These, along with several others, in turn increase say your ability to resist poison or petrification.

As you may have guessed, there is a lot to Dark Souls II: Scholar of the First Sin. Each area has secrets to discover and plenty of enemies, though they stop re-spawning after a few deaths to try and stem farming souls over and over and making the rest of the game a cakewalk. These levels vary in size from relatively large to small with a few basic enemies and a boss battle, but size matters not here: the challenge is ever present, and it feels great when conquered. Our studies have shown that most modern drugs are characterized by good tolerability, but only if used correctly. Only a doctor can assess the true risk for each individual patient and choose the optimal medication, which is another reason to refuse from self-treatment with antibiotics! 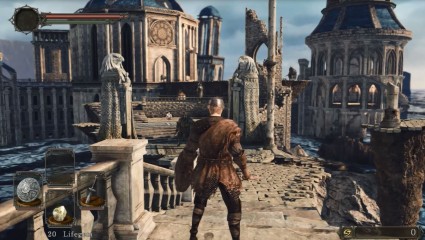 Just one area wields so much…

Those boss battles are the one area where the game can genuinely be hard. If you think basic enemies hit hard, try the first boss then come back and we’ll talk. Again though, these encounters are yours to fail, and the game demands an almost perfect run to defeat them and move on. Summoning a ‘shade’ can help, which is an NPC character who will attack with you, and sometimes heal you. These can be a massive help when facing off against bosses, but do not make the mistake of thinking it will make the encounter super easy. It won’t.

The only real boss I found to be super easy was one where I could actually see him from outside his lair before I triggered the fight. This allowed me to snipe him from afar, so much so that when I got inside to actually battle, one hit was all it took to defeat him. It was an outlier in an otherwise stellar line up of battles that test your gaming skills to the limit.

There is a story here, told in a ‘less is more’ kind of way. NPCs can be talked to several times, each exchange giving a little away about their backstory and why they have come to the land of Drangleic. Each have their own motives and reasons, and while each exchange doesn’t last long and the game features few cutscenes,  you are somehow presented with a living breathing world, if somewhat oppressive, that feels alive. It is a brilliant feat that left me wanting to learn as much as I could about the setting, filling in gaps with my own imagination.

The sound design really adds to this world building, where hearing the distinct moans or clicks of a enemy before you see them can set your senses to high alert in a split-second, making you inch forward to try and figure out what you’re dealing with. Music is perfectly pitched to get the heart racing when it needs to, though the ambient sounds of the landscape can do that alone. The biggest thing though, at least for me, was the sound your character makes upon each inevitable death. I have never heard a more gut-wrenching scream in a game, making you really feel the final blow that much more. 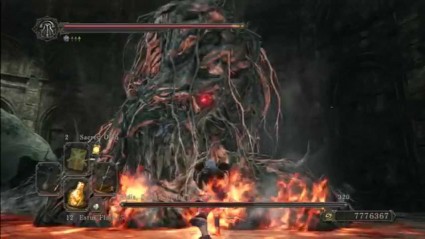 If this doesn’t get your heart pumping, nothing will

Graphically, it doesn’t exactly set my eyes on fire. It looks nice enough, and the art style is fantastic, really setting the decaying world of Drangleic nicely; but it is still an update to a game released on the last generation, so there is only so much that can happen here. The fact that enemies can cut through walls and scenery can pop in on occasion doesn’t help. It looks far from terrible, and the gameplay more than makes up for any little niggles.

So, its good then?

Yes. A stunning display of gameplay, sound, visuals and design coming together to make one of the best games I have played in years.

Scholar of the First Sin has changed certain things about the game, such as item and enemy placement, but the core is the exact same. So if you have upgraded your console and wish to play through Dark Souls II again, this is definitely worth a look.

It might not be to everyone’s tastes, but if you persevere and give the game the attention is rightly demands of you, you will be greatly rewarded with a RPG that doesn’t expect you to pull any punches, because it sure as hell won’t.