One of my very early gaming highlights was a Dungeons & Dragons PC game called Eye of The Beholder. Probably released before many of you were even born (way back in 1991), this was a classic, first person RPG, set in a 3D dungeon where the world played out in a grid that only allowed movement from one square to another. Why am I mentioning a 23 year old game in a review for Vita JRPG Demon Gaze? Because surprisingly, all these years later, I loaded up Demon Gaze for the first time and was instantly whisked back to that amazing experience all those years ago…

Demon Gaze’s dungeon crawling plays out in much the same way. There are obviously some differences with random encounters, loot to pick up, and secrets to find, but I was once again moving about on a fixed grid. Turning moves you through 90 degrees and you have to push forward repeatedly to move from one square to the next. I still had to amass a party to go on my dungeon raids, and fights were classic turn based affairs.

To be fair, this is where similarities end, and as odd as it may seem to say this, in some ways the dungeon crawling element of Demon Gaze feels like a nice change of pace to so many RPGs that feel almost cut and paste. It also readily allows the developers, Kadokawa Games, to create a Metroidvania style expansion to the world by locking out certain parts of the grid until you have the right item for example.

Unfortunately, while you might think that this style should mean that more power is freed up to make Demon Gaze very pretty, this isn’t the case at all. We know from the likes of Uncharted: Golden Abyss, Gravity Rush and Killzone: Mercenary that the Vita is capable of producing some lovely looking 3D games, so it’s difficult to understand why the dungeon sections are, frankly, so ugly. The textures are utterly basic, and repeated square after square, making an otherwise enjoyable RPG bland and boring to look at. 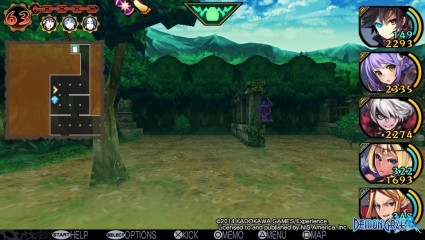 As is so common with JRPGs, many of the battles are random encounters, and whenever you have one of these encounters, the screen fades and you move to a battle screen instead. There’s no 3D play out of the moves you select for your team, each character is represented by a box that moves as the action you selected occurs. This is another disappointment to me as I’ve always enjoyed the escalation of spectacular, bombastic attacks as you get to the latter stages of RPGs; but looking beyond that, battles are satisfyingly tough. If you blindly select attack to try and make your way through Demon Gaze, you’re going to see the ‘game over’ screen an awful lot.

One way in which battles can be swung in your favour is by making use of Demons you’ve defeated and captured, using the titular demon gaze possessed by the main character, Oz. Demons can be summoned to fight alongside the rest of the party, although their moves can’t be selected; they’ll do their own thing while they help. This works well, and the demons also have a chain gauge that needs to be monitored as if this runs out, they’ll become enraged which means they can and will turn on the party.

Much as I enjoyed the challenge though (the demon fights in particular can be extremely tough), as is often the case with this genre, grinding is key. Several times I got to a point where progress simply wasn’t possible no matter what I tried, but spending some time levelling up got me through. I don’t mind a bit of level grinding, but with such uninspired environments, once I’d uncovered the map of the area I was in at the time, wandering around fighting went from being enjoyable to something I had to get through to be able to continue. 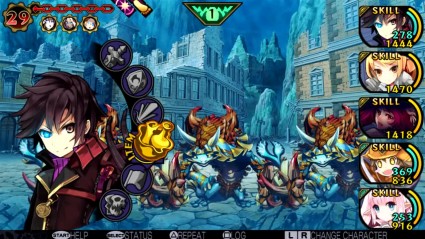 An example battle. You’re never short of options for each character, but watching what you selected on the screen is a little disappointing

Demon Gaze isn’t purely about dungeon crawling though. There’s a central area, an inn, where your party stays in-between the action. Going back to the inn restores health and magic points, but the owner, Fran, requests an increasing rent each time you do return so it’s important to not return too often otherwise you can end up in debt. This introduces a balance of risk and reward, although during my time with Demon Gaze I was never in a situation where I owed any rent.

The inn is also where most of what passes for story in Demon Gaze takes place. There’s nothing particularly earth shattering here, despite a few twists and turns along the way, but the concept of the amnesiac main protagonist seems somewhat beyond a cliché now. Beyond our memory-afflicted hero, the cast and story could only have come out of Japan, with a succession of quirky characters and humour that sent me variously into states of amusement, bemusement, and more than the odd occasion of discomfort with what I was seeing.

The discomfort comes from Demon Gaze’s overt sexual streak, from character models (mostly female) with next to nothing on, and eye-popping proportions, to moments that at times defy belief. Some of this really comes close to crossing the line, and some of it goes far beyond it, with one female character getting caught sniffing the panties of another (I’m really not kidding), one shedding her clothes to prove she’s human within about 5 minutes of meeting her, and least palatable of all, one character who looks like a child walking around in her underwear. At one point a male character offers his thoughts on another child-like character and gets a response “come on, they’re just a kid”. Yeah, exactly…

I got the sense that this was all intended to be taken in good humour, with a generally light tone which at times almost begged me to forgive it, but I have to say much as I wanted to look past this, I really couldn’t. To make matters worse, this element also feeds into what otherwise could and should be a good additional feature in Demon Gaze. 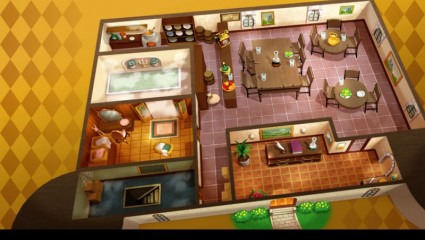 One floor of the inn. You select a room from a list and can move between floors as well to visit shops, and your party

In each dungeon, it’s possible to leave tags on any square, which act in the same way as messages you can leave in the likes of Demon Souls and Dark Souls. Many players have used this in the right way, leaving hints as to where hidden loot is and other handy tips. Unfortunately though, the majority of players have just used this as an opportunity to leave anonymous messages describing what they’d like to do to various characters. Ignoring the fact that these cretins seem to have very little imagination (I’d welcome a bit of variety with the puerile comments, come on guys! Must try harder…), I can’t help but say I was totally unsurprised by this given what the story.

You can delete tags you don’t like, but of course what’s been read can’t be unread, and to my mind Kadokawa should be monitoring this and getting rid of comments that aren’t appropriate, or maybe they’re chuckling away to themselves while reading them, that wouldn’t be a huge surprise sadly.

So, how to sum up Demon Gaze… This is a real toughie to be honest. As an RPG, it offers a genuinely tough challenge that I enjoyed, even if it did tend to rely on level grinding a little too much. At the same time, from a technical perspective it’s disappointing; not making the most of the Vita at all.

Then we have the inappropriate side of proceedings. Part of me wants to overlook this as I did for the most part enjoy myself, but some of what goes on is outrageous enough for me to say that it isn’t right, and is not the sort of thing that we, as gamers, should support. Yes, it’s tongue-in-cheek, but the unhealthy nature of the comments on all too many tags within the dungeons paints it in a far less humorous light.