In the infinite vastness of the universe, a year is but a moment. A fleeting period that adds little to the ever expanding void, but to sentient beings can seem like forever, where even a fraction of it can change their lives forever.

In gaming terms, a hell of a lot can change in just one year. The Taken King is Destiny’s newest expansion, bringing with it a raft of changes and an update to the version number: This is Destiny 2.0 and the game is all the better for it, feeling like this is the game Bungie wanted to put out in the first place.

The big bad is the Taken King himself, Oryx, father to Crota, the Hive prince that Destiny‘s The Dark Below expansion focused on. He has the neat ability to ‘take’ various races, making them strange shadow versions of the enemies you have fought before. This can be taken one of two ways, because on one hand, there are technically no ‘new’ enemies in The Taken King, rather new colours for existing bad guys. On the other, these enemies boast new attacks, behaviours and animations.

For me, The Taken are a great addition to Destiny, giving you a new set of attack patterns to learn. Taken Vex, for example, have different critical hit points to regular Vex, complete with different weapons. I was having fun learning the best way to counter each type of Taken, and while mostly it does involve shooting them in the head, old tactics just don’t fly for some.

That is just the enemies, though. What other changes have Bungie made? The short answer is great ones. The long answer is very long, as so much has changed it is like a brand new game. To be fair, though, if Destiny failed to grab you, then The Taken King will do little to change your mind. The core game is still the loot heavy, multiple-run, gun-toting gameplay it always was, with the core shooting feeling just as good as it ever has.

The biggest change is the way in which the leveling works. Previously, after a certain point experience counted for nothing and you gained extra levels by hunting down weapons and armour with higher ‘light’ ratings. The problem was that the drop rates weren’t cracking, and you could only get the really good stuff by completing the raids. This, combined with the fact that the light system wasn’t the most well-explained mechanic, meant leveling was a bit of a chore.

Now, light is worked out as an average of your currently equipped weapons and armour: the better the gear, the better the light. Each mission/strike/raid has a recommended light level for its difficulties, so if you’re below that level you might struggle. This makes it much easier to figure out what you need to be able to complete a given objective, and your current light level is clearly displayed on the character screen, rather than being obfuscated to a version of your character level.

This makes it much easier to follow and track end-game progress, and I did feel like I increased in power with each bit of new gear. Previously this was just a line under your character that very slowly gets longer and is barely noticed, now it is so much better and really gives you a sense of progression.

The next biggest thing is the quest log. Characters now give you quests to fulfil for rewards of armour, weapons and other goodies. It’s a sorely needed addition, and gives more context to replaying missions because it gives you specific things to do. For example, a quest requires me to generate seven orbs of light with one super attack, three times, in any strike and then complete the strike. This is great because it gives me an excuse to replay my favorite strikes while trying to to accomplish something new. 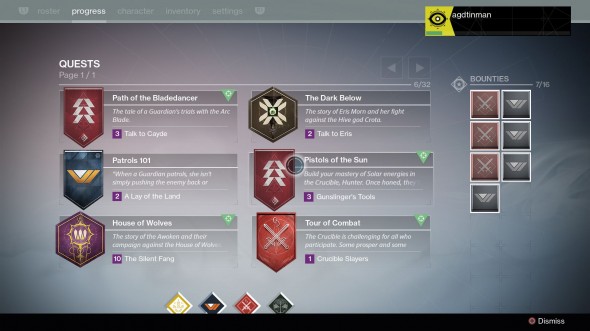 I can see the flip side to this, in that you still have to replay old areas, but with new content comes new missions and strikes, so there is nothing stopping you completing this quest in new areas, nothing apart from your own ability, that is. It also gives you an insight to the people stood around that table in the tower, as previously I couldn’t tell you who they were, they were just another vendor, but the vanguard take a bigger role in The Taken King, providing that little bit more cohesion.

I was genuinely surprised by the amount of quests available, as once I completed the main Taken King story missions, I was still getting new things to do. It gives the illusion of more content than there really is, but you still technically have new stuff to do, so I personally never found an issue with it.

Weapons and armour are the main loot that drives Destiny, and The Taken King is no exception. The update does, unfortunately, nurf many of the best weapons and armour – yes, that includes Gjallarhorn – but this comes in favour of brand spanking new gear that is much more powerful than anything that came before it.

Speaking of Gjallarhorn, I still use it on a regular basis. It is still a strong gun, and one of the few (maybe only) weapons with the Wolfpack Rounds perk, which splits projectiles into multiple smaller rockets. The overall power would, at first glance, make it one of the least powerful rocket launchers, yet I continue to use it because it can still take out a lot of the more powerful enemies very quickly.

Each class now has a new sub-class. My Warlock gained the subclass ‘Storm Caller’, allowing me to use electrically charged attacks. Its super is a hell of a lot of fun, hovering off the ground, zapping enemies with lighting that chains to others nearby. The quest to unlock this has been one of my favourite things about The Taken King.Each class gets a new sub-class, allowing them to control the one element they didn’t have before before. If you didn’t have a void based class before, you will now, for example.

Bounties too have been changed so that no matter what you are doing, you are still contributing to them. Now, bounties, at least for me, are no longer the way to replay content for more experience. They are more of a ‘if you have time’ type of thing, and give extra reason to replay those old missions and strikes. 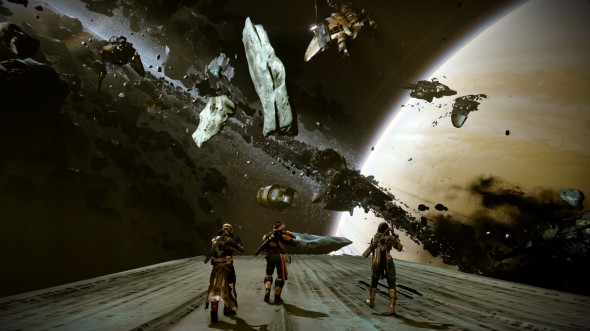 The drop rate for engrams has been adjusted and it now feels like you get a steady stream of new stuff with each combat encounter, even when just patrolling various planets with no other motive than just tooling around. Will you actually use the majority of this gear? Probably not, no, but it really does feel like the loot driven game Destiny always wanted to be.

Ghost, the little A.I. buddy that you get at the start has had a voice change, which is probably the most talked about aspect of The Taken King. Peter Dinklage is gone, replaced with a surprisingly unrecognizable Nolan North, and while the script can let him down, it is so much better it is untrue. Not a hint of boredom, and in some spots there is even enthusiasm, though I suspect that applies to the new content than anything else. As the main voice you hear through Destiny, this change is very welcome, and while I never particularly minded ‘Dinklebot’ as he became known, Mr North provides a much better performance.

Of course, I cannot go further without mentioning that it took a year to get to this point. This content came as an expansion to the base game, and that expansion and the patch that proceeded it made the overall game so much better it can feel like early adopters were slightly ripped off. Had Destiny been given an extra twelve months before release, those first day adopters would have had a much better time.

However, Destiny is an online game, and as such, will see balance updates and new content all the time. The Taken King is a direct response to fan reaction to just about every aspect, and Bungie, while not heeding everything – matchmaking for raids for example – have crafted a game based on player feedback, and made it so much better in the process.

Speaking of the raids, there is a new one, but with few friends who play games and limited time, I still have yet to play a single one. The new area, The Dreadnought, provides interesting nooks and crannies to run around in, so I am sure the raid will be a great piece of content, but there is still plenty to do without it.

What a difference a year makes

While, for me, the base game of Destiny was great, and was my favourite game of last year, with The Taken King, Bungie has spent some time doing the one thing developers and publishers should be doing: Listening. The players have helped to forge how the game has changed (least I hope they have) and the majority of changes make it a better playing experience for all involved.

Yes, it can still get a bit grindy, but if you can point to an MMO that doesn’t have at least some level of grind I will give you a fiver*, it is just the nature of the beast. Fortunately, Destiny’s core gunplay is still fantastic, but now everything around it has caught up.

If you loved Destiny 1.0 then 2.0 is a must buy. If you’re on the fence, now is the perfect time to jump in. If the original game left you feeling cold, depending on what you didn’t like, this could be the perfect way to give it a second chance. See you online, Guardian.

*Please note, I won’t actually give you a fiver.