Unfortunately, none of these things actually make it a particularly great game, with a few silly mistakes on developer Fatshark’s part, leading to frustrations that bring the whole thing down. That said, even if those were rectified, the story it is trying to tell simply isn’t written well enough.

Escape Dead Island is initially set two days before the events on Banoi, which is where the original Dead Island occurs. For the first couple of hours, you are controlling a somewhat cool, gas mask-wearing ninja, exploring a facility overrun by everyone’s favourite cannon fodder, zombies. 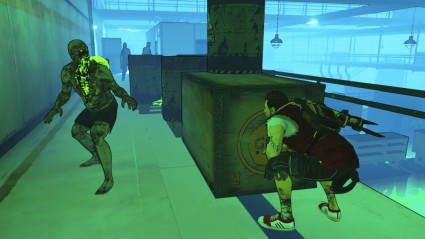 Zombie: Not your regular enemy…oh wait…

This serves as the tutorial, but doesn’t actually give you a good sense of what you will be doing for most of the game. This is because you can pretty much brute force your way through the whole thing, leading to less of a ‘here is what the gameplay is like’ to more of ‘here is what you can’t do for the rest of the game’. It’s the classic ‘abilitease’, but for what is supposed to be a stealth action game that doesn’t really work.

After this, you are given control of Cliff, who is on a boat heading to the same island with his friends Linda and Devan, all which are out to get the scoop on the start of the zombie apocalypse. Of course, things do not go smoothly, and you end up stranded on the beach. From here you start to experience the game proper, this time without the badass ninja suit. Typical stealth action tropes apply henceforth, so crouching will lower the amount of sound you make, and sneaking up on enemies from behind will result in an instant kill stealth attack.

That is, in fact, the most effective method for getting through unscathed; stealth attack as much as you can just to make life easier. The problem is that you have no idea of the sight radius of enemies, and are not even given a vision cone to help you see where they are looking. You can figure it out by simply looking at where their heads are pointing, but at a distance the visuals do not make this easy.

Those visuals, actually, are one of the first aspects that feel strange. When you arrive on the island as Cliff, everything is bright and colourful, which is weird to say about a game that features zombies. Even when the decaying buggers do show up, it is still a bright game, which doesn’t really give off a scary vibe. Then again, Escape Dead Island isn’t really going for scary, so that can be forgiven. 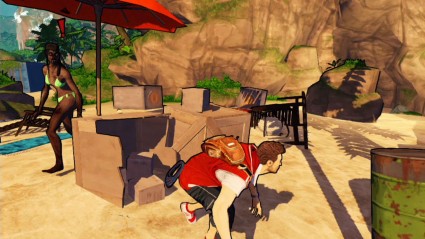 My problem with the visuals, however, is two fold: First, things like animated grass just stick out of the flat textures below them, and look out of place. It isn’t a game breaker by any means, but you travel through a lot of areas like this and it can really stand out. Secondly, enemies can just blur into the background, with only slight movements showing they are there. This can be problematic as you try to stalk around a zombie and get the stealth kill, as you are suddenly rumbled and have to fight your way out. To be fair, Escape Dead Island does a good job of telling you when something has spotted you, but a terrible job of where that something is. This can lead to slightly unfair deaths as you get acid spit on you by spitter zombies while fighting off other zombie types, two or three at a time.

On the plus side, said undead beasties are fairly easy to kill so, at least until the last couple of hours, you can hack your way through if needs be. Your arsenal includes a pistol, shotgun, axe and kitana – all standard fare for this type of game and enemy. It also includes a camera, providing another strange element; you can take pictures of the things around you at any time, and there are around 86 snapshots to collect. These range from pictures of buildings on the island, to boxes, to the zombies themselves. Does it bring anything worthy to Escape Dead Island? Nope, nothing. It can even add to the stress when trying to quickly take a photo while being rushed by a new enemy type, leading to a death for just trying to engage with a mechanic.

This leads me on to the most infuriating aspects. When you take a snapshot or pick up one of the postcards, geopharm files or trinkets that make up the other collectibles, it doesn’t save. If you die shortly thereafter, or decide to quit out, you have to collect them all again. When you’re stuck in an area filled with enemies, having to also remember to retake that snapshot or pick up that file doesn’t exactly enhance the experience, and it can sometimes feel like it’s actively trying to piss you off. Of course, you might not mind that, but I found it irritating  to have to re-do those, as well as battle my way through the room again. Unfortunately that isn’t the worst of Escape Dead Island‘s faults, and is probably the one the developers could easily fix.

No, Escape Dead Island falls down almost totally as you near the end, and the story slowly starts to make its way down a strange and ‘disturbing’ track. At some point, Cliff starts to see things. Dead people, obviously, but I am talking about stranger things, things that probably shouldn’t drop from the sky like sand slipping through your hand.

This would be an interesting and disturbing journey into the effects the virus has on the human mind, but the way this translates into gameplay is simply rubbish. You get crappy objectives and reversed controls, all in the name of delving into the psychological aspects of Cliff’s time on the island, but it just ended up frustrating me massively. 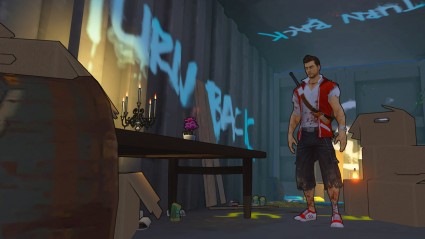 Be disturbed damn it!

This then leads into biggest misstep: the finale. Combat rooms are a well worn trope of video-game design, and can prove to be very fun if the combat is up to snuff. Unfortunately, here the combat simply isn’t good enough, and leads to the last few moments being a frustrating mess where you are constantly killed because you cannot manoeuvre well enough to thwart the enemies attacking you.

Combine this with the fact that each room starts with an unskippable little cut-scene that just gets maddening after the tenth time, and you end up frustrated to the point of quitting. It lead me to not pay attention to the final story moments because I just didn’t care. I was only thankful the game was done. Even then, as far as I could tell there was no big pay off, and it kind of stops with no real explanation.

I liked the first two Dead Island games, will I like this?

Well, the answer to the above question depends on you, really. If you are particularly invested in the lore the other entries in the franchise built up then, yes, you might be interested how this goes, but you would have to very interested to get beyond the poor gameplay and terrible story to make it worth your while. Unfortunately, it’s average at its best, and terrible at its very worst.

Simply put: there are better ways hide from enemies and to kill zombies.