If you strip away the monsters, the sci-fi setting and the lovable rogues, Evolve – the latest game from Left 4 Dead developer Turtle Rock Studios – is about friendship, pure and simple. Assuming you actually have friends to play it with, Evolve will provide you with a great night of entertainment for all.

The set-up is simple: The planet Shear has become overrun by three types of monsters; the Goliath, the Kraken and the Wraith. It is up to a motley crew of hunters to track down these creatures and take them out. You play as either a member of a group of four hunters, or as the mighty creature with a few different objectives thrown in. 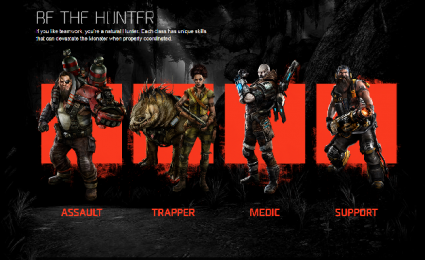 While this concept is fairly straightforward to understand, the nuances in gameplay only slowly show their true colours: knowing how best to play as each class and monster only becomes clear after extended play. Add to this the fact that Shear is filled with NPC wildlife that can also attack you, you need to have your wits about you. When playing as the monster, I encountered more than a few hunters taken down by methods other than my own.

These creatures serve a purpose for both sides. The monster can kill and eat the many creatures around to gain armour and energy to, as the name suggests, evolve. The monster has three stages of evolution, with more health and armour at each stage, not to mention skill points to spend on ability upgrades. The local fauna can be used by the hunters as well, but this is generally a one-time buff such as 35% extra movement speed.

How best do you combine each of the Assault, Medic, Trapper and Support class abilities to take on the monster? As the monster, how do each of your abilities compliment each other and make you into a formidable foe for even the tightest team? These questions are answered as you play, and the single-player game helps to train you before you take your skills online where the real test lies. 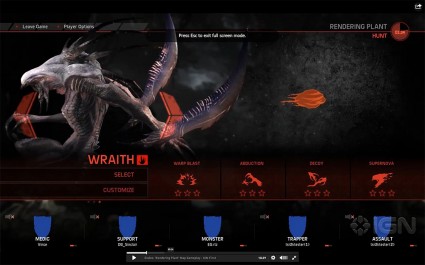 Each monster has unique abilities

As the hunters, at first it feels like a fairly standard first-person shooter. However, each class must combine abilities, and you have to play to your class’s strengths or your team loses quickly. For example, the Trapper has the ability to lay down harpoon mines, sticking the creature in place to allow the other classes to really open up. The Medic class, as the name might suggest, heals the party, but also has a sniper rifle which can create weak points on the monster for the team to take advantage of.

The Support class, the game states, buffs the hunters. What this actually means is that they can shield allies from harm, encasing them in a force field, while also having heavy weapons and the ability to call in air-strikes. Finally, the Assault class does the most damage, and is probably the most typical ‘FPS’ style of the lot. This class is designed to unload on the monster until it is dead, and is probably the easiest to play at first.

The single-player campaigns did wonders to help me figure out how best to use each ability, and how to combine them to take down the monster. This doesn’t work as well as it might does with human players, but the A.I. is by no means terrible.

That’s the downside to the single-player mode, though: the A.I. Its just a little too efficient in finding you if you play as the monster, and a little too good at evading to level up as the monster, to the point where I have only ever won a couple of rounds. Even then it felt more like luck than actual skill. If you play Evacuation – five rounds of the different modes played consecutively, that can get a little annoying, especially as the other side gains help each time they win.

Of course, as I mentioned, the single-player mode is here to teach the different class abilities, and allows you to earn XP towards the unlocks which – let’s be honest here -are now a standard part of most multiplayer games. This allows access to each new monster and new characters for each class so that there are plenty of ways to vary your play. The unlocks are also just spaced out well enough, which kept me trying to get that next lovely upgrade.

The hunter upgrades are a little strange but kinda work. They follow a similar path to playing as the monster with three stages of ‘evolution’ to get through, except here, upgrading the initial Trapper’s abilities unlocks the next Trapper character, but also gives you a slight buff to the ability in question. I found it a slightly strange way to space them, but it ultimately had little effect on my enjoyment, and if anything got me to play more.

New characters mean new abilities to play around with. Generally speaking, you always get a slight variation on say, the med-gun for the Medic, but you will also have other new features, such as swapping the sniper rifle for a grenade launcher that fires healing bombs and napalm grenades. It allows you to vary your play style and pick characters that feel right for you, providing plenty of depth.

With the monsters, you will get through that upgrade path much quicker as there are three monsters only, not three for each class. Each creature has its own abilities and varies the most when compared to same class hunters. The Goliath cannot fly, for example, but the Kraken can; however, the Goliath can spit fire and throw rocks. The Wraith can create decoys and kidnap foes. The Kraken was my preferred choice to play as, its lightning strike and aftershock abilities feeling like the easiest to use for me. 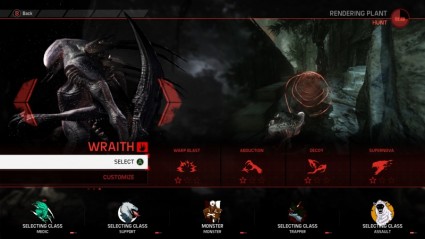 There are only a couple of modes, but to be honest, that’s all you need. There is ‘Hunt’, which is what I played the most and is definitely the most fun; ‘Rescue’, where the hunters must revive and then defend downed NPCs while the monster tries to kill them; and finally ‘Nest’. This one is essentially a reverse on the Rescue mode, where the creature is trying to defend eggs from being destroyed by the hunters.

There is a mode called ‘Defend’ as well, where you start as a stage-three monster with lower level minions to help you to attack certain points on the map.  At the same time, the hunters, as the name suggests, try to defend. This mode only came up when playing evacuation or once playing random rounds, so it honestly isn’t the most popular and, while better than Rescue and Nest, just isn’t as fun as stalking or hunting your prey in hunt mode.

I have to say that Evolve looks and sounds pretty damn sweet. There is a minimal use of music when playing, but the technical audio design is impressive. If the monster were to disturb some nesting birds, then the sounds of them flying away can alert hunters to its location; brilliant. Unfortunately, the monsters don’t sound too distinct from each other, and the human banter gets more than a little repetitive, but it does still work and the ambient sounds are what really sell the atmosphere anyway.

The art-style is a particular highlight. Real effort has been put into making each monster, and each hunter, look distinct. In the hunters case, you can almost see their previous adventures through their faces and clothing, while monsters look like walking masses of muscle and sinew, ready to kill everything that stands in their path.

In reviewing, I played Evolve exclusively with random people online. While most played the classes assigned to them, there was no real connection, no banter to increase the fun as one of your number slowly stalks the other four, and while everything was perfectly playable and I had much fun, I spent the entire time wishing I had a group of friends just as eager to play. 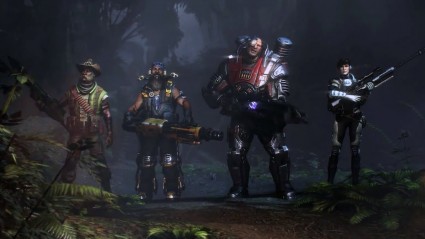 Therein lies the main problem with Evolve. While it plays great, looks awesome and has little to no issues online, if you are generally without people you know, it ultimately feels a bit… empty. You can have some fun and learn the game, sure, but the real joy will come from doing it with your mates. Finding the right group of randoms, who all play their class and co-operate isn’t as rare as you might think, but simply doesn’t beat playing with friends.

Regardless of whether or not you can get your friends together to play, Evolve is still a great game. The steady drip-feed of unlocks and the strategic depth of gameplay are, I believe, enough to keep most going for some time, and I was never at a point where I wasn’t enjoying myself.

Still, despite my concerns about playing mostly with strangers – playing with friends is definitely better – Evolve has enough depth that playing at all is very rewarding, and when you do get that good group, it’s an absolute blast.