What is Firewatch? That question became a bit of a joke since its announcement, but now Firewatch is with us and I can categorically inform you it is indeed a game; a game about two people, and no destruction, no shooting and no aliens.

Set in the Wyoming wilderness, Firewatch presents an intriguing tale set against gorgeous scenery. Not everything fully works in its gameplay, but if you are in the mood for a sedate and well written story, this could well be for you.

You play as Henry, the newest inhabitant of a watchtower in a forest prone to fires during summer. It would be a lonely summer save for a handheld radio that connects him to the next tower over from his and the lone woman that lives there, Delilah.

I don’t want to spoil too much, suffice to say that a mystery starts to unfold that Henry and Delilah have to solve. Obviously, this is mainly Henry doing the figuring out, since you play as him. I will say this of the story: At no point does it turn to the fantastical to weave its tale. The story happens to Henry and Delilah, and is a good, old fashioned mystery. 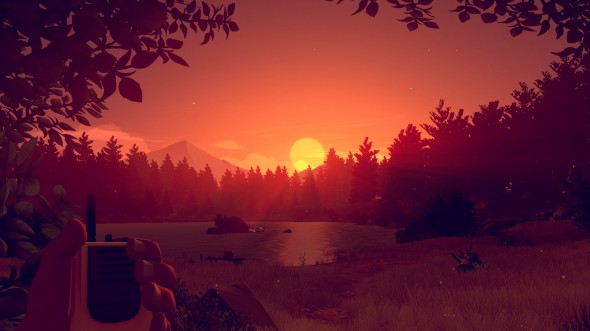 Something is afoot, even with that sunset…

Firewatch is more thriller than anything else, though it rarely builds up any real tension, but then again, that’s not really its point. Intersecting the main story is the developing relationship between the slightly broken Henry and the just as broken Delilah. They never actually meet during the entire experience, but the writing is so good that it feels like more than just a friendship develops between the two.

The meat of the story is that relationship, and how it builds up and is shaken by the mystery that unfolds around them. Henry is trying to escape his life, but you can feel the guilt in him, and I honestly felt for the guy. I sat there wondering if I wouldn’t do the same thing as him in his situation, which is a testament to the great writing permeating throughout the entirety of Firewatch.

Then there’s the feel of Firewatch. It took Henry a two day hike to get to his watch tower, and you can really feel that walk as you move around the game world. Its actually amazing what the developers have managed to do with the visuals. Yes, there are certain barriers to just wandering through the entire forest, but none are invisible walls or feel out of place, and some even come with a bit of banter between Henry and Delilah, which is a fun way to relay info to the player. 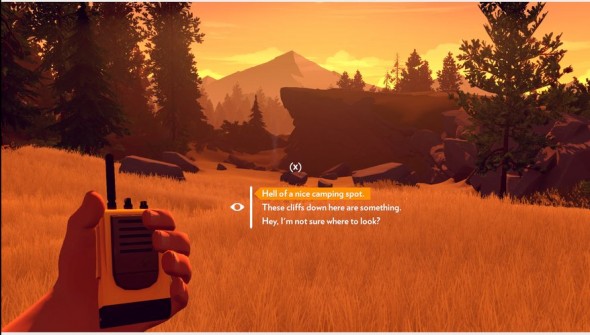 Never been so close yet so far away from the Wilderness…

The developers at Camp Santo have done so much with so little, and at all times I felt like I was hiking through the woods looking out for any trouble makers. The view is just gorgeous from the top of the tower, and you can see some beautiful sites as you move around the wilderness. Is it on bar with actually being in the Wyoming wilderness? Even without ever being there I can say no, because there is a slightly cartoony vibe to everything.

However, this doesn’t detract from the visuals in anyway, and if anything, it adds to them. Yes, the uncanny valley this isn’t, but the world you play in is alive and real. The sound design has just enough of the ambient noises you would hear in the woods, and makes the world – and this might sound weird – feel ‘just right’.

The voice acting is absolutely fantastic, and the two actors really do make the main characters come alive. There is a ‘choose your answer’ angle to the dialogue, which doesn’t seem to affect anything other than your personal arc with the characters, and that is kinda cool. Firewatch is one of those games that you play, and what happens therein is your version of that game. It probably won’t be the same as mine or anyone else’s, and what you take away from the story is yours too.

My only issues are that it can be easy to miss dialogue trees and, secondly, the map.

The dialogue trees pop-up while talking to Delilah, and generally have a few responses to what she is saying. The system works well, but if you are moving about the world and start to interact with something, that action takes precedence over the progress in conversation, leading to a few occasions where I couldn’t respond because I was stuck in an animation and the timer ran out. 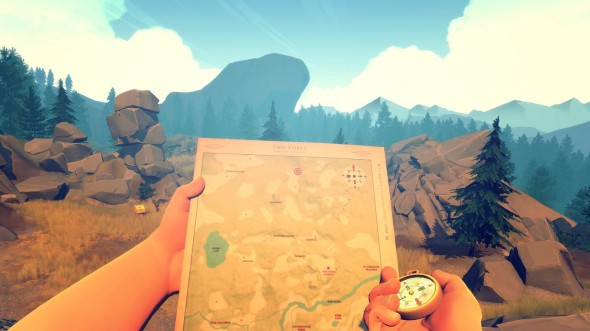 It’s a small thing, but such was the quality of the writing that I wanted to hear everything that was said, so this was massively disappointing. The other issue, the map, just isn’t stunning from a gameplay perspective. It is functional, and offers the feel of Henry hiking his way through the woods and having to orientate himself, but it got kinda of annoying to get lost because I hadn’t checked the map in the last thirty seconds. Getting lost is a joy, but objectively, the map isn’t quite fit for purpose.

So… what is Firewatch?

Firewatch great game. The story that unfolds is brilliantly told and set against the stunning background of a lush forest. There is no shooting, no aliens, nothing supernatural, just a great story told well. If you want the latter, this is not your game.

For everyone else, however, Firewatch is part of a new generation of games that break the mould and do something that little bit different. With such craft and beauty it really isn’t hard to call it art.