Let’s be totally honest about this: football fans are a fickle bunch. When our team is winning, our manager and his players are the best thing since sliced bread. They can do no wrong, and anyone who dares question them will get derisory looks and comments that would have them avoiding any dark alleys at any time of day, at risk of a swift kicking.

On the flip side, when things aren’t going so well the blame lies squarely at the door of the gaffer. The players are still brilliant, but the manager picks the wrong ones, plays them all out of position and has no notion whatsoever of a positive substitution.

It is also fair to say that us fans know best, regardless of the manager’s experience in the game. Terrace/pub chatter dictates that the average football fan would have made Wigan Premier League champions and led England to European and World Cup glory over the past ten years.

This is why when the latest Football Manager game hits stores, every single football fan’s ears prick up, the hairs on the back of the neck stand up and we get our duffel coat at the ready. We prepare to spend hours, nay, weeks scrolling through an endless list of players as we look to lead Barnet away from the foot of League Two all the way to Champions League success.

For those of you who don’t know, Football Manager gives you the opportunity to take your place leading a Football team. As ever, there are an enormous number of leagues and clubs for you to start at, or you can create your persona and start unemployed and wait for the right offer to come your way. When in a job the aim is simple: win football matches and lead your side to glory, climb the career ladder and become one of the game’s legends.

Tracksuit manager
How much you involve yourself in the running of your football club is entirely up to you, as you can delegate various aspects of the day to day work out to your assistants. Likewise you can take on pretty much everything from the youth team through to the seniors, including all the recruitment, contract negotiations, and finances.

The main full game, it has to be said, has not changed much from last year’s offering. Obviously the player databases have been updated (though it seems there are fewer mugshots than last year’s version), and there is a little bit more overall depth in terms of tactics, which are almost entirely adjustable via sliders that allow you to customise down to the most minute detail.

The training has changed, and I have to say I am not overly convinced it’s in a good way. The ability to create specific training regimes that you can set to different players or groups of players is now gone. What you have instead is a pre-match training screen that will allow you to set specific focus points for the period of time immediately leading up to a match.

These can be set as default focus which you can adjust to Attacking, Defending, Team Cohesion, Ball Control, Tactics or Fitness. Alternatively, you can set this to Balanced to incorporate a bit of everything, and you can also set the intensity of this pre-match training from very low to very high. You can then set the specific sessions either to your set default or to one of the specific routines for the coming month. 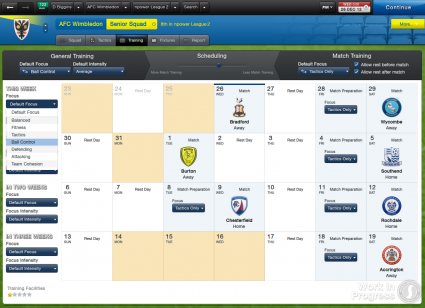 You can go into individual training and set individual routines for any one of your players, which might be position-specific training or to build up certain aspects of their game like their passing style or shooting technique. However, the only options here are pre-set ones, with no way of creating your own routines.

There are new additions to this year’s release, in the form of extra game modes. Firstly there is a Classic mode, which allows you to set up what is essentially a full game but with some of the more in-depth options stripped out. The main home screen skin is much the same as last year, and you still have access to all the menus and most of the game options. The full depth of individual training and the pre-match options are stripped out, however; so no team talks or pre-game instructions.

Instead you effectively just deal with the basics of the hiring and firing, picking the team and their tactics, and then sending them out to play. The shouts and quick tactical changes are all still available during a match, so the most noticeable absence is the full training options. I will be honest and say that it doesn’t really play as the quick alternative it is billed as.

The other addition is a Challenge mode, which gives you a set of pre-determined scenarios to play through, such as turning around a terrible start to the season to avoid relegation or continue an unbeaten start to emulate Arsenal’s Invincible season. Each scenario is given two grades, a difficulty and a time rating, and once complete you have an option to continue your career from this point.

Now, this is a true quick play option, with the challenges not being more than a season in length and offering a nice alternative to the full game. You can still pick the team you want to manage, so you can go into the Saviour Cometh challenge where you need to avoid the drop after picking up around seven points from your first twenty matches as Manchester City, for example, which does make things a little easier. The challenges are varied, though, and do offer different kinds of tests. 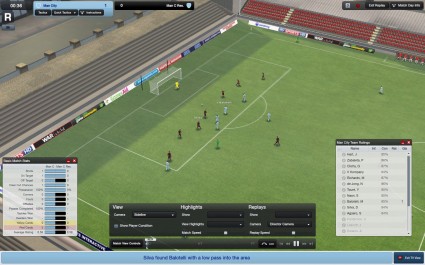 Pitchside
Football Manager 13 remains a text-heavy game. The home screen has a new look which modernises things ever so slightly, while navigation between the various key areas of your staff, players and competitions is as simple and effective as ever, either via mouse clicks or keyboard shortcuts. The pre-match statistics and details are presented a little better than last year’s tactics screens, having a tiny bit more spit and polish overall.

On the pitch the 3D game highlights have more depth to them than ever before, with the player characters slightly blockier than previous versions. The animation of the players is also upgraded, making the game flow slightly better than before when viewed in this manner. I have to add here though that we shouldn’t get carried away; the 3D graphics are still far more comparable to Sensible Soccer than FIFA.

Crowd control
Once again, Football Manager comes with incredibly limited audio. The main game screens remain deathly silent; there is no pre-game chatter or effects. In fact, there isn’t even a tune as the game loads. The only sound in-game is when your team take to the pitch, and this comes in the form of the most basic crowd cheers you will ever hear. There is no chanting, nothing team or player-specific in any way, just a basic cheer that raises in volume as and when the goals go in.

There is no real need for any background music of course, but during the matches, the basic and low-level aspect of the crowd cheers are as far away from other current sports titles you are likely to see. It remains an area where the team behind the franchise seem content to ignore in favour of extra depth to the databases or a new skin in the home screen. 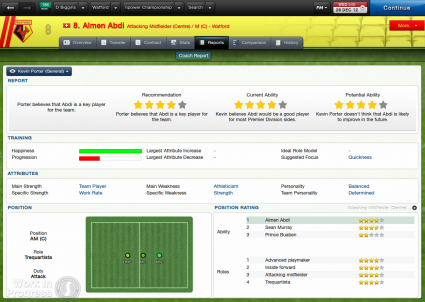 It’s a team game
As ever, Football Manager offers local and online multiplayer modes, with the full game being the main option available. I have never been a fan of the local multiplayer where each manager takes his turn at the screen going through his team and doing his scouting, as there are long periods of time when you are idle or watching. FM simply is not designed for spectators.

The main network game setup is basically the same as last year. You need to know details about the game you are joining, such as the server. There are still no options to simply search and find a random game to join, not at this early pre-release stage at least. Setting up a network game is easy enough and the usual options are available to change, like the leagues included and the amount of time a user has to play around between matches. I am praying that this is rectified as soon as possible, as it will add a huge amount to the final multiplayer option.

This year has a new Versus mode, which allows you to set up quicker multiplayer options. You can set up a single knockout tournament for up to 32 managed teams, a quick-fire mini league for up to six playing home and away matches, or a simple head-to-head challenge where you take on one individual over five competitive matches. This versus mode is crying out for a simple quick match option to get you involved, which could give some of the series’ more casual gamers a chance to finally experience Football Manager as a multiplayer game.

Unfortunately I have only been able to play local multiplayer options during my review time, so cannot advise if there are any issues with the network experience. 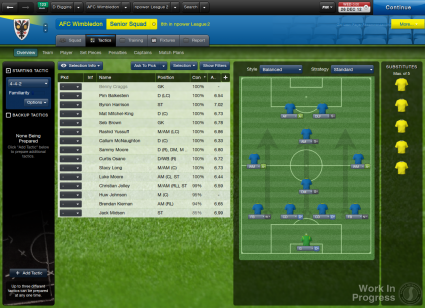 Game on
As ever, Football Manager 13 offers you the most definitive management experience anywhere, and any football fan will get months of enjoyment building their career in one of the game’s available leagues. This year’s game looks a little better than previous versions and has developed an extra (thin) later of match day depth, as well as making some good additions to your club management. You’re given a touch more freedom to set how much you want to do yourself, and a bit more confidence that the tasks you delegate will be well looked after by your staff.

The additional quick game options of the Challenge mode and the Versus mode offer a light alternative to the usual life-consuming game, which will allow players struggling for time a chance to get some enjoyment in short bursts while taking nothing away for the hardcore.

It’s not all positive, though. Personally I am disappointed with the changes to the training options and I believe that some sort of soundtrack should really be included moving forward, or at least some genuine sound effects that are club-specific, or a bit more detailed than the monotonous crowd noise we have become accustomed to.

Ultimately, the final verdict depends on whether you have last year’s game. If you do, the new quick game options are the biggest change and aren’t really worth the purchase cost on their own. However, if you haven’t picked up a Football Manager title before or even for a little while, then this is definitely the best the series has to offer.