God of War is one of the best action adventure series to have graced any platform over the past few generations, with its mix of kinetic action, mythology murdering, eyebrow-raising lady shmoozing, and puzzles that seem to get bigger and better with each release. Of course it all started late in the life of the PS2, but now following the release of the God of War Collection on PS3, it’s arrived on PS Vita as well.

Is this remake heavenly though, or should it burn in the fires of Hades?

The God of War Collection comprises of the two PS2 games, God of War I and II. I’m not going to go into any great depth about the story as there’s nothing new here. Suffice to say, there’s no change but if you’ve not played either and you enjoy a good action adventure, you owe it to yourself to put that right and buy both, one way or another.

The mechanics are largely the same as well, aside from some changes necessitated by fewer shoulder buttons. This results in the back touch panel being needed to interact with the environment, chests, doors, and so on, while the front touch screen is also used to activate certain attacks such as rage of the Gods/Titans, and to swap weapons.

The touch inputs work fine, although it’s worth noting that a few times I accidentally touched the back panel in general gameplay, resulting in things like the save game screen appearing when I hadn’t intended to save, or levers being pulled by accident. It’s nothing game breaking, but a little irritating all the same when it does happen.

Otherwise, it’s business as usual and the fighting and platforming work more or less as well as ever. One area I struggled with a little was QTEs requiring movement of the analogue stick, be it a half turn or full 360. Because of the small size of the analogues on the Vita, this could get a little fiddly at times, although again this was just a little annoying rather than anything more serious. 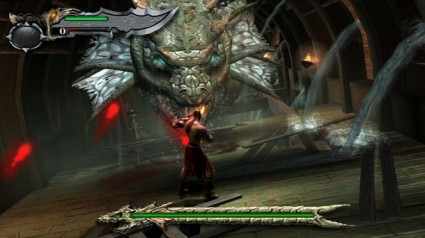 I remember the opening Hydra battle in God of War feeling utterly epic at the time, it doesn’t have quite the same impact now sadly but is still very good

It’s fair to say that a pretty good job has been done of converting both games to HD, at least in so far as the in-game graphics are concerned. It all looks very crisp, and despite being something of a gaming vintage at this point, God of War II in particular manages to be better looking than some new Vita games I’ve played recently. This does come with a large caveat though, the cut-scenes are abysmal. No work has been done on these at all, which results in the oddity that player controlled sections look a million times better. It’s not just the lack of effort that counts against these cut-scenes either; they’ve been stretched to fit the Vita’s screen which makes the proportions all wrong.

It’s mystifying why these scenes have been completely ignored. If you’re going to go to the effort of releasing an HD version, then surely it wouldn’t be too much more work to also improve the cut-scenes. This also stretches to the audio both in cut-scenes and at times in-game too, which can be muffled and extremely unclear.

If this is disappointing, then a larger concern appears in God of War II, which I didn’t notice in part I. In some of the busier fights, and larger scenes, the frame rate stutters and drops dramatically. I must admit I can’t recall how well either instalment played on the PS2, but I also don’t remember feeling that my progress was being hampered by technical issues. Despite the shiny HD visuals, it’s still a PS2 game, with the associated textures, so I would expect that the Vita should be able to handle it comfortably. 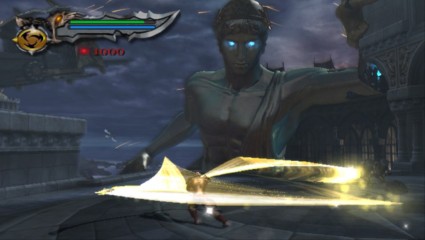 The even more epic Colossus battle in God of War 2. Still brilliant, and still epic

While at its core, this collection still offers you the experience of God of War I and II, it’s sadly impossible to escape the feeling that the developers have gone through the motions a little, and this takes the sheen off what should be an easy recommendation for the Vita. As it is, if you’ve got no other way to play them and you’ve never had the experience before, then both play just about well enough to justify the purchase. However, if you’ve got a PS3, or even a PS2, you’d be far better served getting the collection there instead.