I admit, I haven’t played any of the Just Cause games before, so when the hype began for the third game my interest was definitely piqued. I had always heard of the sheer joy you could experience in Just Cause 2 by running around and blowing stuff up, finding creative uses of the tether and generally having fun. It sounded like the perfect dumb sandbox, so I went into Just Cause 3 hoping for much of the same.My hopes were dashed quickly. To be fair, this was largely my fault. I had bought into the hype and the admiration for the last game and had put far too much onto Just Cause 3 for it to ever live up to.

The set-up is relatively simple, Rico Rodriguez returns home to Medici to find it is controlled by General Di Ravello, someone that wants to do the same to the rest of the world. Thus ensues Rico trying to stop him using a variety of weapons, gadgets and vehicles.

There is certainly plenty of variety with this, but it almost always boils down to two scenarios: When you need to blow stuff up you use ‘special’ weapons; rocket launcher, grenade launcher, or your grenades. If you need to take down infantry, you have your grenades, twin machine pistols or an assault rifle. The latter two have various types strewn throughout the world, but I just didn’t find a need to swap them, and when I did it was done accidentally. 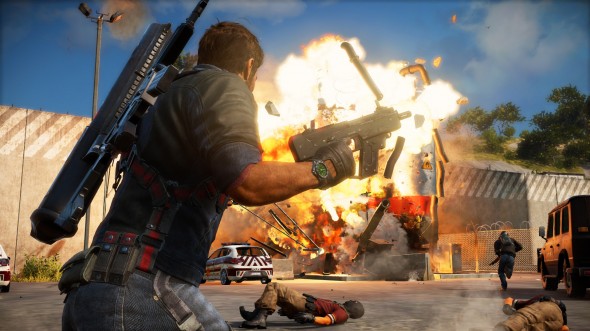 Red line = blow it up

The vehicles are like this too; there are plenty to play with but you only really need a couple. An attack helicopter and a tank will pretty much see you through, and that includes traversing the world, but I will get onto that in a moment. As is the way with open-world games, the citizens of Medici are going about their business, so while you can always find a vehicle, you just don’t need to.

At the start you are given three items: A parachute, a grapple/tether launcher and a wingsuit. These three combined mean you really don’t need to get in a car to travel to the next point of interest, just float around and see what you can find. It can be slow going, and some spots do require you to find a chopper or other transportation to get to your location, but for relatively close areas you don’t really need anything.

These three items also give you plenty of mobility in combat situations, allowing you zip around areas and avoid fire with relative ease. This, combined with a massive amount of health, means Rico can do some serious damage before having to retreat. However, this mobility can also be a hindrance because, if you screw up a tether shot, you can find yourself stuck in a corner being hit from all angles.

It’s on you of course, but it’s worth noting because it can be frustrating. Luckily, progress isn’t reset when you die, so it is easy to get back into the action. 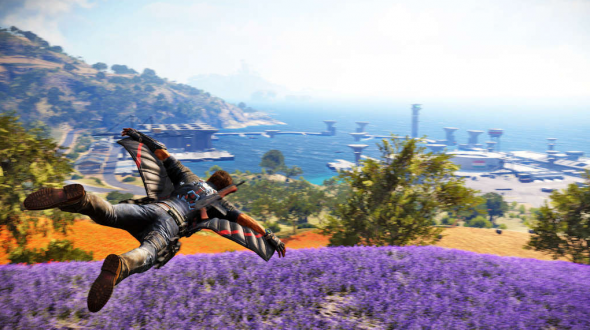 What progress? Well, the island nation of Medici is made up of several provinces, each with several regions, each with several settlements. You need to liberate each settlement to release the region from Di Ravello’s grip, which in turn frees up the provinces. This is achieved by finding each settlement and blowing required parts of it up until it is deemed liberated. These parts are anything with a red stripe on them; fuel tanks, radar towers, statues. If the town has such things, then they need destroying.

Depending on the size of the town, this is Just Cause 3’s greatest strength. The bigger settlements can have several ‘chaos objects’ in close proximity to each other, and setting off a few fuel tanks and other items in quick succession results in spectacular explosions that are extremely satisfying to witness. The smaller areas have you destroying billboards and megaphone poles blasting Di Ravello propaganda, which are simply not as much fun. When you hit the big places, though, it can be a hell of a time.

Just Cause 3 emphasizes destruction above all else, giving you all the toys to accomplish that feat. My disappointment comes from the simple fact that you can get the job done with a few grenades and a rocket launcher, and the experimentation that the designers have tried to put at the core of the experience simply isn’t reflected in the gameplay.

For example, as you liberate more areas, you unlock challenges. These are things that, on paper, you want to do because they earn you gears, and gears mean improved skills, like carrying more grenades or better wingsuit control. The problem is that you have to perform a specific task to earn gears for a specific type of upgrade. Your standard XP grind this ain’t. So, rather than perform any challenge to earn gears and then customize Rico how you wish, if you want to upgrade wingsuit performance you have to do those particular challenges, and this is the same for cars, boats and planes. You can earn upgrades to your grenades and weapons by performing destruction frenzy challenges, which are by far the most fun, but also the most easily circumvented.

This is because the set-up for the challenge might be ‘use your rocket launcher and attach to these helicopters flying around and destroy everything’, but if you explore for a minute, you will find a attack chopper with infinite missiles just around the corner. The game allows you to use them in these challenges, completely negating the challenge presented. It’s not necessarily a bad thing, but these challenges don’t teach you how to use the mechanics to your advantage and thus feel like a wasted opportunity 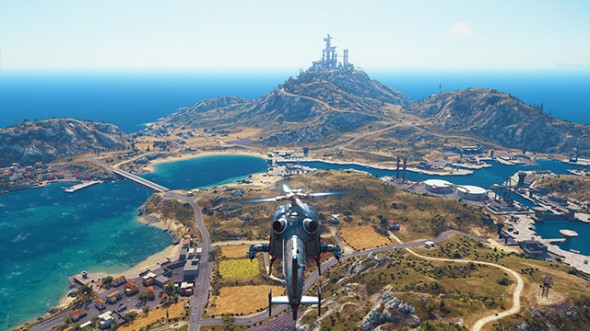 RPG needed? Sod that, use a chopper!

The simple fact of the matter is that you don’t need to really improve the driving, flying or boat skills, these are completely irrelevant. The ones you care about, the ones where improvements are made to combat and destructive capabilities, are rare to the point it is almost needless to do them. You can do just fine on your own without the upgrades and, even when you do get them, they rarely feel like they add much. Except for homing grenades; they are cool.

Overall, the challenges are side-missions, but could have been used to teach the player how to be creative with the mechanics. Instead, they feel like padding to an already expansive game, and half of them add nothing of use. The wingsuit challenges are stand out, mainly because they can be incredibly frustrating due to difficult controls. These control issues are only an issue when trying to pilot the wingsuit through rings during the challenges, and the reality of using it in general isn’t the same, begging the question why they’re in there at all.

Apart from a question mark over why some are even in the game, the challenges also represent Just Cause 3’s biggest issue: repetitiveness. The core gameplay loop is go to town, blow everything up that is marked, rinse and repeat. Now, all games have this issue to a degress, I get that, but because Just Cause 3 doesn’t actively encourage creativity with its mechanics, it does feel like you are doing the same thing over and over again until the whole map turns blue. The act of blowing stuff up is very fun, but unless you think to experiment a little – and there is little need to do so – it can get very repetitive.

It has to be said that Just Cause 3’s open-world is massive. I kept thinking I was getting close to finishing then pulled the map out to find even more landmass to explore. It certainly doesn’t skip on things to do either, with each area offering collectibles to find, challenges to complete, settlements to liberate and vehicles to steal. It just isn’t quite the sandbox I was hoping for, with the main story missions pretty boring at best and tedious at worst. The game world just isn’t setup for escort missions and pretty much every story mission is one. 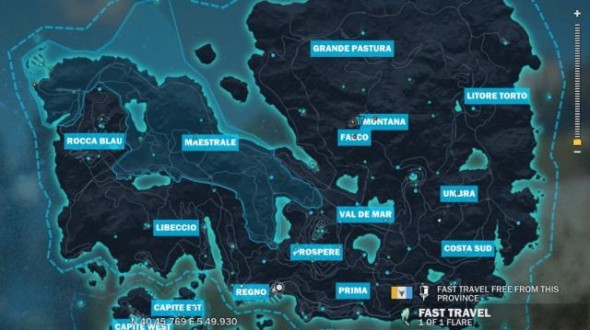 This is just one landmass on the map…

It does look and sound great though. There’s plenty of verticality to provide an excuse to use the grapple and parachute, and damn does it look nice when those explosions kick off. The sound gives everything a great feel, with weapons having plenty of grunt and again, those explosions.

The only other thing is that I did encounter some bugs.

For some reason, the box that is supposed to pop-up to ask if you want to retry a challenge doesn’t always appear, though you can still hit ‘X’ to choose to replay. I thought this was a game lock-up and restarted a couple of times before I figured it out. The load times can be exceptionally long, ranging from a few seconds to well over a minute, even within the same challenge if you hit repeat. A patch during my review seems to have relieved some of this, but those load screens do take just a little too long.

There is no multiplayer mode, save for trying to beat your friend’s scores at things like ‘longest wingsuit flight’ or ‘farthest reel in’ and to be honest, it’s not something you need to care about. A proper multiplayer mode in the vein of the modded Just Cause 2 multiplayer could well have pushed this into one of my must play games of the year, but alas, maybe next time.

Just Cause 3 is a great game, just don’t go in expecting it to be the ultimate sandbox for destructive gameplay craziness; it is much more structured than that and, while experimentation can be had, it isn’t actively encouraged and that’s a shame. When you do set off a series of explosions and are just wrecking the entire place with wanton glee, this game is so much fun, but I just couldn’t shake the feeling it could be so much more.