I have to be honest and say that when the review copy of Killer is Dead landed at my door, I had absolutely no idea what to expect. So like every good journalist does, I took to the interweb and researched. Phrases like “action game” and “hack and slash” immediately leapt out at me and, coupled with mentions of “secret agent”, it meant that before I loaded the disc for the first time I was expecting something of a cross between Ninja Gaiden (one of my all-time favourite game franchises) and James Bond (one of my all-time favourite movie heroes).

Oh, how wrong could I have been?

You take the role of Mondo Zappa, an executioner and something of ladies man, hence the Bond reference. Mondo works for the Bryan Execution Firm, led by a rather large Cyborg called Bryan, who dishes out government sanctioned contracts on various killers. As Mondo, you then travel to some rather bizarre dwellings to take out these monsters so that you can declare “Killer is Dead” and take your earnings.

The money earned is then spent on romantic gifts, like perfumes and flowers, to help our man seduce the various “beauties” of the world. This is, without question, the most bizarre and awkward side quest I have ever seen in a video-game, as you alternate between the main Assassin story missions and the Gigolo side quests.

Cold case
KiD is, for all intents and purposes, a paint by numbers hack-and-slash right down to the controls. X is your main attack button, and most of your encounters will see you repeatedly mashing this button to build your combo meter as you take on the various low-level enemies. You can add to this with the Y button, which is your “break guard” attack and is basically your heavy attack, best used to try and break down any defences. B is used to defend and, when combined with the left stick to move, becomes a dash that can be used to assist in both defence and attack. A is reserved for actions, such as picking up items or opening doors.

As you move around the levels you’ll find boxes or crates to break, and hidden in some of these will be the various items that are also dropped by your beaten enemies. These take the form of Moon Crystals, which act as a currency to purchase upgrades, Health Gems which, funnily enough, add to your health. Blood Roses raise your Blood power, which is used for special moves, health regeneration and firing your alternate weapon, Muscleback. 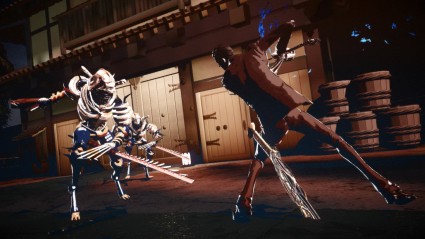 Muscleback is Mondo’s bionic left arm, which is used to complement the Samurai sword in his good, right hand. Muscleback has various attachments that you can unlock as you progress through the game, and can be levelled up by spending your Moon Crystals. The attachments in my playthrough, while a nice idea, appear generally useless, except for the gun, which gives Mondo a ranged attack to accompany the close range sword play. This is used by pressing LT to target and RT to fire.

Surprisingly, for someone who is clearly a top class Assassin and something of a ladies man, Mondo has not developed the ability to jump. At various times throughout, the game decides that you also should not run, so you will find yourself taking a slow steady stroll through a relatively uninspiring level. Often there are no enemies to face on this path and any dramatic build up is well and truly killed.

Any potential flow or momentum is also disrupted by a non-stop torrent of often-annoying cut-scenes. This in itself is not entirely unheard of, we’ve all played Metal Gear Solid, right? Unlike that timeless classic, though, the cut-scenes in KiD just seem to drag the game out, rather than clarify the storyline or give you any empathy towards your character. Finally note on the cut-scenes, nearly all of them will have an appearance from your “assistant” Mika and let me warn you now, this is a character you really will want to disappear.

Outside of the main story missions are the previously mentioned Gigolo missions. This sees you in control of Mondo in a bar with a fully clothed “beauty”. Here you will need to wait until she looks away before copping a sneaky look at the ruder parts of the female body and making sure she doesn’t catch you. Do this successfully and you can then give her a gift to win her heart and she’ll escort you out of the bar. Seriously.

If this wasn’t bad enough, by finding Scarlett (a scantily clad “nurse”) or via the Killer. Lover. Executioner DLC, you can unlock a pair of special shades which will allow you to see through your targets clothes to their underwear. 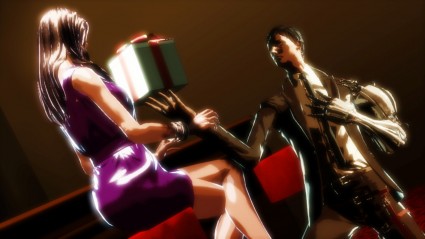 In another effort to destroy any progress made on the use of female characters in video-games, you will also unlock alternative outfits for your colleagues that are the sort of thing you might see worn on one of those dodgy late night television channels. Now it is feasible that I have missed the point entirely here, but not only are these gigolo missions entirely dull to play, they appear to have no purpose outside of perving over a female cartoon character.

Killer looks
KiD certainly has some bold and distinctive visuals. The cell shaded characters and the over the top gore are a key component of what comes across as a very Eastern, cartoony style throughout. The missions take place, in the main, in arenas that follow this bright, bold visual feel with vibrant colours littered across the screen and enemies that stand out and fit well within this game world.

A selection of levels are akin to the basic two-tone world map that acts as your level select screen. To be brutally honest, these stick out like a sore thumb. One level in particular sees you walking along an off-green stone path with no surrounding visuals or enemies to talk of and, while there is a fairly valid reason within the story for this, it simply does not fit with the game world and is, quite frankly, dull.

The animation itself is nothing to write home about. Simple fight sequences flow well enough and on the few occasions that the enemy numbers rise there are no issues with frame rate, but character movement in general just feels, well, over simplistic. To try and qualify that statement, a large percentage of the enemies and the bosses in particular seem to scuttle or float when they really should walk or run. A spider type creature, for example, moves around the walls of the room but you never feels like it’s actually making contact. 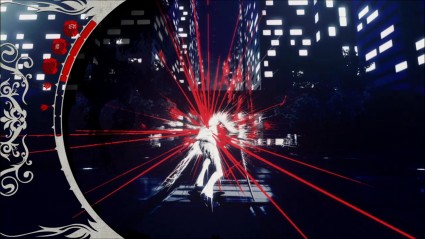 Every blood rose has its thorn

Dead beats
In stark contrast to that bold, brash, in your face colour, the sound in KiD is rather nondescript. Effects come across as being at the budget end of the scale, with footsteps and weapons failing to deliver any real weight and the background music fails to add any atmosphere. There are occasions where the background music is dropped all together and, personally I felt this use of silence added more atmosphere than any of the tracks that are the norm.

The voice acting is a little better, with characters having what I would call fitting voices, and the dialogue between them is even a little humorous at times with some good tongue in cheek comments. On the negative side, Mika is quite possibly the most annoying character I have ever come across in any video-game and quickly made me want to turn the sound off all together.

Fun killer
Unfortunately, I really am struggling to find too many nice things to say about Killer is Dead at this point of the review. It looks like a budget XBLA title, it plays more like the sort of hack and slash title you would have enjoyed on your Playstation over a decade ago and not a game released eight years into the life of the current gen. The cut-scenes are too frequent to get into any kind of flow and the Gigolo missions are just plain awkward.

Unless you’ve got a penchant for the weird, give it a wide berth.