I love point-and-click adventures. Growing up as a gamer in the 80s and 90s, LucasArts games were my staple diet. The Dig and Indiana Jones and the Fate of Atlantis in particular were wonderful experiences, although there were many gems on offer back then. I was saddened to see this genre seemingly go into terminal decline some time ago, but a funny thing has happened with the advent of smartphones and tablets, and also with the surge in Indie developers: The point-and-click adventure has made a comeback and I couldn’t be happier about it.

For starters, this gave me a chance I may not otherwise have had to finally put right a wrong of many years, by finally playing through Broken Sword 1 and 2, but perhaps more importantly, there are now new games in this genre appearing, and it’s my pleasure to have the opportunity to review one of these in Lilly Looking Through.

This is the first game by American company, Geeta Games, who have opted for something of an unusual protagonist; the eight-year-old little girl, Lilly, and her younger brother Row. I don’t want to give too much away but the story starts with Row being whisked away on the wind by a magic scarf, and Lilly then sets out to rescue him. What follows is a beautiful, charming and gently humorous adventure with some great puzzles, which progress from slightly testing to pretty damn fiendish by the end of the game.

Straight to the point (and click)
Although this is a point-and-click game, it doesn’t play in the same manner as those games I mentioned earlier. There is no inventory management here, no dialogue to make your way though. Lilly Looking Through is more a game about manipulating your environment. So, while you will pick items up, you will find that they will be useful on the present screen for the most part, rather being an object to store for later use.

The one object that does play a major part throughout the game is a pair of goggles. These transform the world around Lilly when she puts them on, and as such are integral to the gameplay experience, helping her to get through the gameworld. I love these goggles, not only do they look cute sat on Lilly’s head (if you’ve listened to my interview with Steve from Geeta Games, shameless plug here, you’ll know his daughter did this very thing with swimming goggles), but the way in which they interact with the world is superbly thought out and adds an extra dimension to this genre.

There is the odd nod to other games here, one bringing to mind Day of the Tentacle, and another more action orientated moment reminded me of Prince of Persia: The Forgotten Sands in point-and-click style, but Lilly is a confident enough game to do its own thing too. 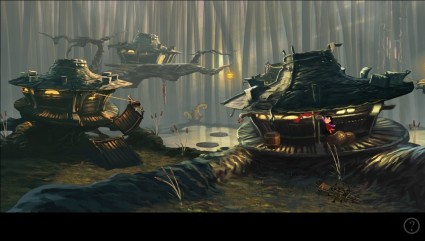 As the game is based on solving puzzles, and most people I’m sure (certainly myself) are more than capable of getting stumped, there’s a hint button on the bottom right of the screen. Should you need to use this though, it never gives anything away, but rather highlights anything on the current screen that you can interact with. I must admit I had to use the hint button a couple of times, particularly with a colour-based puzzle later in the game which spanned multiple screens.

In fact, I ended up solving this particular puzzle by pure accident after spending some time wondering what the hell I should do, and that’s the only time this happened, but the puzzle answer at least felt ever so slightly obscure. That said, I did realise after the fact what I should have done, or rather what exactly I had done to get through that section of the game.

No need to gild the Lilly here
Lilly Looking Through is simply a beautiful game. The backgrounds are a sight to behold, each screen a hand-painted work of art. There is a magical, otherworldly quality throughout, and the manner in which interactive objects are interposed into this world is superbly done Then we have Lilly and Row, who are both drawn in a cartoony style, with more charm than an awful lot of AAA game characters. Several times throughout, I found myself smiling or chuckling at one or both of them, whether they were falling on their backside, or trying to sneak up on something.

The way they both interact with the environment is brilliantly realised, and really makes you believe these are a couple of children getting up to mischief. It’s clear throughout that a lot of love and attention has gone into the graphics and animation in particular and it’s perhaps no surprise that talent from Disney and Pixar were involved with this aspect of the game.

Every screen in the game looks as good as this

Tinkles…
Eulogising about the graphics aside, the sound also serves to add to the magic. For the most part, we have gentle, tinkling background music that fits  perfectly, but Lilly and Row both have the odd piece of dialogue which is acted out effectively by real-life siblings. The music at times is also used to heighten the on-screen action, particularly when Lilly is sneaking. This is nothing that hasn’t been done before, but it fits, and I challenge anyone not to smile.

Short but perfectly formed?
If there’s one slight negative, it’s that Lilly Looking Through is a very short game, really only running to ten separate areas. Of course, how long it takes you to play through it will depend on your ability to solve the puzzles therein, but I managed to complete it in an afternoon. You’re probably looking at three to four hours at the most.

It’s testament to how well this is put together, however, that even though I completed it and therefore knew how to solve the puzzles, there was still enough of a draw for me to want to go back through it again. I did so just to enjoy the world and keep an eye out for any incidental detail I may not have picked up on first time round.

If you like the idea of spending a relaxed afternoon experiencing a magical, funny, and gently challenging game, then here we have a little gem that’s absolutely worth your time and money.