Lords of the Fallen

Thanks to From Software and the Souls games of the past few years, a new sub-genre of the nails hard action RPG is gradually arising, with many enjoying the exceedingly tough challenge they present. Deck 13 Interactive and CI Games are the latest developers to give it a go with Lords of the Fallen, which owes more than a passing nod to the Souls games.

Is this a Souls-crushing victory, or a soul-crushing disappointment? The truth is somewhere between the two.

Let’s clear something up to start with. I’ve only played Demon’s Souls on PS3 and I’ve played neither Dark Souls. Much as I enjoy a challenge, I never finished Demon’s Souls simply because I never found the time to dedicate to being good enough to complete it. Finishing any would be a feather in my gaming cap for sure, but I found dying over and over to be a little much. So what am I doing reviewing this, you ask? Well for one, we here at TIMJ believe it shouldn’t matter who does a review, but perhaps more importantly, I’d heard that Lords of the Fallen was similar but not quite as punishing.

Starting out, early on it certainly feels as though this is the case. I didn’t die once until I reached the first boss, and although he gave me a good hiding a few times it didn’t take me too long to get past. After that, the normal enemy encounters do ramp up, although I breezed past the second boss without dying at all.

In terms of gameplay feel, Lords of the Fallen certainly owes a debt to From Software. Shields prevent some but not all damage, rolling out of the way is a must quite regularly, although it feels a little sluggish and slow to react to your input, so timing is absolutely crucial. Repeated hits with your weapon of choice will return higher and higher damage, but have to be balanced by ensuring you don’t take a sword to the face that would put Cloud’s buster sword to shame.

Graphically and stylistically Lords of the Fallen also feels similar, although with slightly more of a Norse feel, infused with gothic styling. Expect lots of grey and gloominess, though, and you won’t be disappointed. Enemies feel a little generic although they’re no less vicious for that, and failing to be careful can quickly result in a death and a restart.

As Harkyn, a convict released to help destroy evil in the land, you can choose to be one of three classes, warrior, rogue or cleric. I opted for warrior in the hope this would be the easier to get to grips with, and then in the main I relied primarily on a shield and close quarters weapon, both of which are satisfying in operation, with larger weapons having a real heft to them in action. 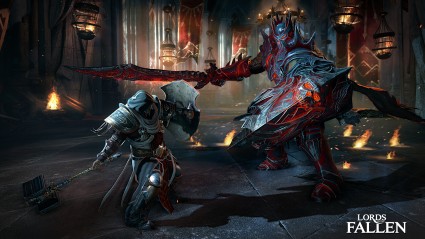 Early on there’s a gauntlet pick-up that also becomes a major part of proceedings, as it allows a magic-based long range attack with three different forms. If, like me, you’re not particularly good, this really helps in sticky situations, although if you’re willing to wait for the magic bar to re-fill when you’ve used it up, an over-reliance can quickly form which both removes some of the skill requirement, and makes Lords of the Fallen a little more dull to play as well. Of course, common sense here would then suggest I stop relying on it so much, but when dying over and over in itself becomes a little soul destroying, it’s all too easy to just switch back to slowly picking enemies off from a distance.

Progression as Harkyn is handled well. There are save points dotted about fairly liberally (this part of Lords of the Fallen is certainly more forgiving than the Souls series), and at these you can also choose to exchange any collected experience to upgrade different skills. This is a balancing act, as the longer you leave this, the more experience you can get. On the flip side though I found that when I was really struggling it allowed me to go and kill a few enemies, then go back and upgrade to try and level up a little before trying to progress any further. It’s a smart system, further matched by it being possible to retrieve any gained experience from the point at which you died, although the longer it takes to get to this point, the less experience will be left waiting. Of course, a further death sees that experience gone for good.

So far so good then, but it’s not all rosy. Earlier I briefly mentioned that movement can be a little sluggish, and this definitely detracts from the experience. Weight is a big factor in determining what to equip, but I found in practice it made little difference to how Harkyn handled, and too often my attempts to roll clear of an incoming attack were that bit too late. I’m willing to accept this was at least in part due to my comparative lack of skill, but comparing this to how I remember Demon’s Souls handling, and it’s definitely not up to scratch which for something this difficult is poor. 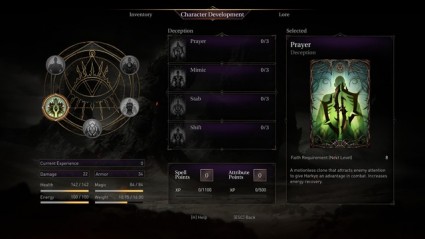 This slightly below par handling also, to an extent, fed into the camera and lock-on system, in particular during boss battles where at times there could just be too much going on to keep track. When you need to keep an eye on where the boss it, what attack he’s launching, what your health level is, have you selected your shield, the gauntlet, or to hold your weapon two-handed and which magic spell are you using, things can get slightly overwhelming. Tag onto this one of my personal pet hates when it comes to boss battles and things go from overwhelming to massively frustrating. The pet hate I refer to is re-spawning smaller enemies.

This doesn’t happen in every boss battle, so I don’t want to give the wrong impression here, but to me this has always smacked of lazy game design. In a tough RPG like this, I want to spend my time figuring out the enemy, how to avoid their attacks and best them. What I absolutely don’t want is to be struggling to do this already, only to have an enemy I hadn’t noticed sneak up and deal me a huge amount of damage before I even have time to react.

Unfortunately, despite the good parts of Lords of the Fallen that I’ve mentioned, I found that overall the negative slightly outweighed the positive. Part of this is down to time, though, as I found myself feeling as I did with Demon’s Souls. There needs to be a certain investment of time to complete Lords of the Fallen, because it’s necessary to take the time to learn how to defeat enemies, with that familiar cycle of dying a fair amount of the time, but when my time is already fairly limited I find it hard to motivate myself to continue playing. If I’d gotten on better with the controls perhaps I would have enjoyed it more, but about ten hours in it just became a slog, and from that point on I really was just playing because I knew I had to. 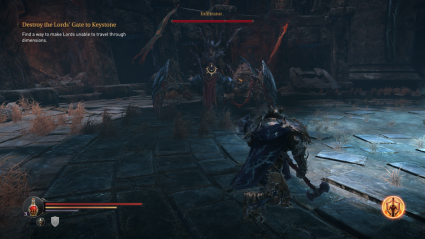 Running away would seem a good plan at this point!

If you’re desperate to play another tough RPG, can’t wait until Bloodborne arrives in a few weeks (assuming you have a PS4 of course), and you haven’t picked up Lords of the Fallen already, then it’s worth a go. It’s not bad by any stretch although don’t go in expecting this to be on a par with the likes of Demon’s Souls as it quite definitely isn’t.

If, like me, you struggle for time and are put off by the difficulty, then I would say give this a miss. There are other RPGs out there now that are simply much better, and far less punishing.