Very few sports truly pass me by. Throughout school and into my adult life I am pretty confident and proud of the fact that I play, watch and have an interest in almost anything that involves teams or individuals competing. Alas, we can’t always know everything, can we? Basketball is one of those rare sports where I have to hold my hands up and say I genuinely have no idea and, in all honesty, have no great deal of interest. I was actually surprised to learn recently that Michael Jordan is no longer the poster boy of the sport and the Chicago Bulls are not, apparently the only team. Who knew?

As such, NBA 2K14 is my first experience with the franchise that is to the NBA what Madden is to the NFL, or FIFA to the world of Association Football. Given my only previous experience of a Basketball video-game was NBA Jam, I was a little unprepared for just how deep the level of detail goes. This depth hits home immediately as you create your pro for the “MyCareer” mode. MyCareer is the main focus of the single player experience and allows you take a quick glimpse at the sheer volume of game modes and options available. I decided to make my first stop the Training Camp, which has a number of routines for you to master which get you familiar with the controls and some of the more detailed concepts of play.

While there is a basic button press for both passing and shooting, to beat defenders and open up the court to allow you to start winning games, you will need to mix these with the Right analogue stick control that allows you to feint and trick your way to success, as well as make some more elaborate attempts to put the ball in the basket. While most of these training modules are pretty straightforward, I have to admit I needed YouTube to help me out more than once, which was a sign of things to come.

Having cleared those hurdles I took the next most casual option of Blacktop, which is essentially a street game of Basketball. However, any thoughts of NBA Jam or NBA Street were quickly wiped from my mind as I realised that even in these most basic of game modes, you need a little more about you for NBA 2K14. Player models are superbly crafted, animations are incredibly detailed and just between the two you are expected to know what’ is a good or bad move to make. Initially, I started to get a bit frustrated as even what appeared to be simple, close range efforts were regularly missing by a distance.

Another visit to YouTube helped me to understand that this was largely down to timing my release on shots. Mastering this is just another nod to just how impressive the visuals are. There are subtle hints in the player animations that signify when is the best time to take your shot, with the release of the button or a stick movement often being the deciding factor. These can be a little difficult to spot to the untrained eye but when you do start to pick them up, you really do appreciate the work done by the developers. 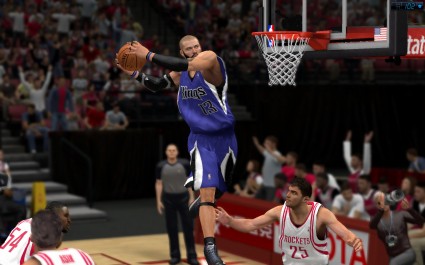 Walking in the air

Those subtle visual animations are matched by some fantastic sound effects both on and off the court, which add a level of authenticity throughout. Sneakers squeak with every turn and burst of speed, the ball bouncing echoes perfectly, as do rebounds and dunks. Breaks in play are filled by the kind of commentator nonsense that makes you feel like you are watching the game on TV rather than playing it on the Xbox.

Having familiarised myself with the basics, I took the plunge into MyCareer. You begin with the Rookie Showcase game to try and sell your talents to the watching scouts from the NBA. You follow this up with a few short interviews with prospective employers before the Rookie draft and signing your first pro contract.

MyCareer then takes you through a full career of NBA stardom as you look to build your player’s reputation by doing the right things on and off the court. In another sign of the pure depth and detail in NBA 2K14, this goes way beyond game-day performances. You can see what your fans are saying about you on twitter, build your popularity by arranging team building exercises, and purchase training sessions with some of the NBA’s legends (like Larry Bird) to help you out on the court. These events will cost you, though, so you need to make sure you keep your performances up to earn the coins. Alternatively you can run some drills between games to help boost your coins and practice some of the game’s more subtle techniques. 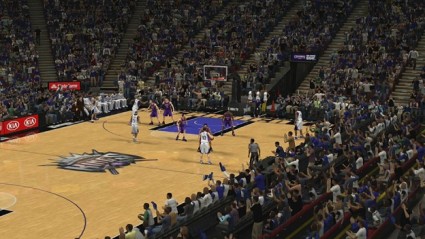 Personally I have found NBA 2K14’s MyCareer the most fulfilling individual player experience of any of the big sporting franchises. The way it starts out and the journey it takes you on genuinely made me feel like a rookie player learning the game. Both between games and on the court, you are integrated into your team as you learn more about the game and in my case, more about the sport.

Obviously, you can also play the game controlling the entire team, either in one-off games or via another slew of modes. Playoffs and Season are exactly as they suggest, while the Association Mode allows you to control your favourite NBA franchise over a greater length of time and is available both on and offline. This is possibly the most in-depth way to play as it includes all the General Manager and Coaching options you can think of, giving you total control over your chosen franchise. When I say total control I mean total control. If you’ve played FIFA or Madden’s equivalent mode and thought there was a lot going on, multiply that by about one hundred and you may be getting close to how much you can tinker with in NBA 2K14.

Here I have to hold my hands up and say that things like player roles and abilities were lost on me, so I have barely scratched the surface. In fact, it is true to say that I felt a little overwhelmed by the Association Mode and, outside of what was needed for the this review, have generally avoided it for that very reason. This is one for the purists. 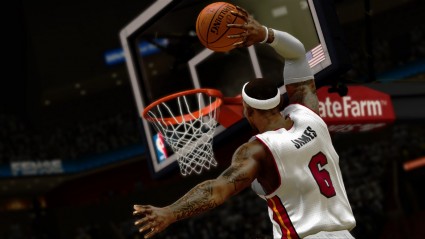 Online games are played with the same smooth, quick visuals you see offline and five-on-five matches have nailed the pace of the real-life game impressively. There is a very healthy community and being the noob I have been given some helpful advice in these matches, far more often than I’ve been ridiculed. That’s something I have rarely experienced in other online games and only made my experience more enjoyable.

Slam Dunk
NBA 2K14 is a lovingly created simulation of its subject matter. The attention to detail puts other sporting franchises to shame and it makes no apologies, nor should it, for expecting players to have a certain amount of background knowledge. Even in the most casual game mode, a certain level of understanding is needed and recognition of the teams and players would have helped me no end, as I have since found out that taking on a 3pt attempt with Lebron James is much like trying a thirty-yard piledriver with Rio Ferdinand on FIFA.

While I don’t really have this knowledge and my experience unquestionably suffered because of it, I enjoyed my time with NBA 2K14. The game mechanics are superb, the visuals exceptional and, as a fan of sports, Visual Concepts have to be applauded for their diligence in making, in my opinion, the most complete sporting simulation on the market. Having said that, it’s not for everybody ,as those with no interest in the sport or a desire to learn are not welcomed with the pick-up and play gaming options you’ve come to expect in other big sports franchises.