When Criterion Games took on the Need for Speed franchise a few years ago with Need for Speed: Hot Pursuit, it seemed like a marriage made in heaven: A classic arcade racing game picked up by the developers of Burnout, arguably the best arcade racing series ever, could only yield great results. Sure enough in Hot Pursuit and then Most Wanted it certainly did so. Here we are now, with a large part of the Criterion team having formed a new studio, Ghost, to make the latest in the annual franchise, Need for Speed: Rivals.

Have they managed to continue the trend of great openworld racing action though, or is this latest release a ghost (ahem) of its former self?

Let’s get the really bad out of the way immediately, because that’s more or less what happens with Rivals itself. The introduction is absolutely awful, to the point where I could feel myself cringing and wishing it would go away. I’m sorry to say that the ill-advised cut-scenes permeate the experience, and they don’t really get much better.

Of course painful cut-scenes aren’t really what racing games are about so, bad as they are, as long as the action itself is up to scratch the rest doesn’t really matter. Rivals follows Hot Pursuit in bringing the police back into the fray as a playable faction, giving two separate campaigns to follow as the police or as a racer, and you can swap between these freely if you fancy changing sides.

To progress through either campaign you are presented with a checklist of targets, which may include getting a bronze, silver, or gold in an event, using pursuit tech to hit other cars or destroy them, among many others. During my time playing so far (it’s enormous so I’m far from finished yet), I’ve found the targets to be nicely varied, and every level gives you three different checklists to pick from, although you can go back and complete the lot if you wanted to.

Looking beyond the differences between being a cop or racer in terms of being the chaser or chased, progression is slightly different as well. As a cop, you get given a new car as you progress through each level, but as a racer you have to buy cars with points earned by completing events, drifting, getting air time and much more. These points also go towards upgrading your car (not an option for the police) and buying pursuit tech.

Be honest, if the police really had cars like this, everyone would want to be a cop…

To begin with, I found I much preferred being a cop. It’s an easier route as the cars are stronger and more immediately accessible, and since there’s nobody trying to take your car out, I found that progression came fairly fast. On the flip-side, initially I found being a racer rather frustrating. The major point here is that if you get busted, which is far from out of the question as cars initially can be relatively flimsy, then you lose all points gained since you last entered a hideout to bank them.

This happened all too frequently to me to start with, but while at that point I might have ended up writing that it was just annoying and made me not want to play Rivals, it turns out that if you put the time in to get used to how this plays out, it’s actually a touch of genius. Here is an easily measurable risk/reward scenario, where the longer you are out on the roads accruing points, the more damage is taken (although there are garages where health and weapons can be restored), and the higher your heat gauge rises, which means more police, road blocks, helicopters and so on.

So yes, it’s still really frustrating if you get busted before you can bank your points, but there are few greater rushes than making it to the nearest hideout with no health left just as you’re about to be busted. In the end, it’s that which makes being a racer all the more exciting, though there’s plenty of enjoyment to be had on either side. Plus, if you get bored it only takes a moment to swap.

Both sides go up to level 60, so there is a huge amount of game here to be played. I haven’t made it that far yet, but I do wonder if there’s enough variety to keep things interesting for that long. I also feel there isn’t as much in the way of side attractions as there was in Most Wanted. There you had billboards and security gates to smash, speed cameras to run through and so on. In Rivals, the speed cameras remain, but now you have jumps replacing billboards (for some reason not quite as fun to me!), and speed zones instead of gates, which basically involve getting the highest average speed over a section of the world. Then you get told if you’ve managed to best your friends or not. 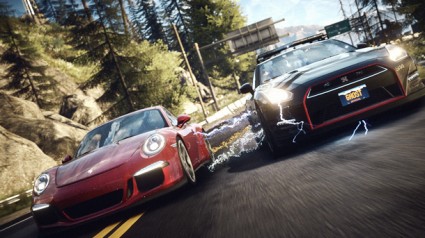 Better than a Bugatti Veyron? A Nissan GT-R police car that shoots electricity…

This isn’t the only multiplayer aspect to Rivals either. Rivals introduces ‘Alldrive’, which makes Redview County a shared world with five other players. These can seemingly be any mix of cop or racer, and you can challenge them to races, work together to bring racers down if you’re cops (which multiplies your score), and more. While there is a good idea in here, there is some room for improvement. Partly I say this as having only 6 human players (padded out with NPC racers and police) on such a vast map meant that I rarely encountered anyone else unless I was looking for them, but my bigger complaint is that this also resulted in regular disconnects interrupting my progress.

During one Saturday afternoon I got kicked out five times, which is far from an enjoyable experience when it can interrupt progress. The good news is this doesn’t result in having to restart mission objectives, or the loss of points; the bad news is that if you’re in the middle of an event, even if it puts you back into it, you will more than likely have to start it again. I should mention that I have asked a number of friends if they’ve experienced similar and only one has, although the others did say they’d not played Rivals all that much.

When it’s not kicking me out, Redview County is a beautiful place. The design of the world is such that round every corner there seems to be an impressive view, and Ghost have managed to cram an impressive range of environments into this area, from sunny coastal roads to snowy mountain passes and everything in-between. These differing areas pose different challenges as well, with the mountains providing slippier surfaces and tighter corners while other areas lend themselves more to hitting as high a speed as possible. 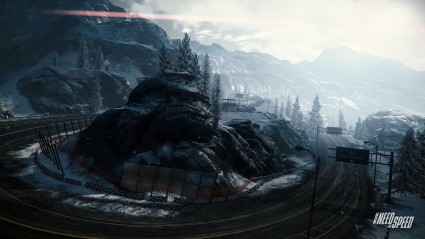 The cars also look stunning, although they do handle differently this largely seems to be down to how fast they go and how well they corner, they don’t feel as different as I’d perhaps expected they would. Despite that, driving any of the cars is fun, and I soon found I was perfecting drifts round corners and happily recording speeds of 200mph through speed cameras. The cars do sound quite different as well, with the beefier cars giving out some impressive growls as you nail the accelerator.

Need for Speed: Rivals certainly looks the part, and can hit some almighty highs at times, but then it can also be frustrating. It seems that Ghost’s vision for online gaming, as good an idea as it is, has not quite worked as well as they perhaps intended. The less said about those horrendous cut-scenes the better too, although in fairness they’re really irrelevant to any enjoyment to be found here.

All-in-all, in spite of some issues, I’ve greatly enjoyed my time with Rivals so far and will be more than happy to get my arcade racing fix by playing it some more. It’s also impossible to ignore the sheer generosity of the overall package which should easily keep me motoring for many hours to come.