What would you do if you found a ring with a mystical aura that causes you to relive the same day over and over? This is exactly what has happened to Randal, and he heads out to set some things right, especially since his best friend keeps killing himself in outlandish ways every time the day resets. He wants to be a good friend ya know?

This is the basic premise for Randal’s Monday, a new point and click adventure on the PC. For those of you thinking that the name Randal reminds you of the Kevin Smith movie Clerks, well you’re in luck. Jeff Anderson, who played the video store running douche from that film, also plays Randal here.

It’s not the same Randal, though. This one is a sociopath, a kleptomaniac moron and the other just makes good points about Star Wars, yet you could be forgiven for thinking that once the game starts and the fully voiced conversations get under way. Those conversations, by the way, can be really funny and acted well, even though paying too much attention to the lip-syncing can spoil things. It’s not a complete failure, just noticeable. The thing is, most of your time will be spent listening to the voice actors, and unless you can get past this you will not have a good time. Sure, you can turn the subtitles on and get around it, and clicking the mouse will skip through dialogue, but doing either of those will make you miss out on the games best bits, and sarcasm is tough to get right in text. 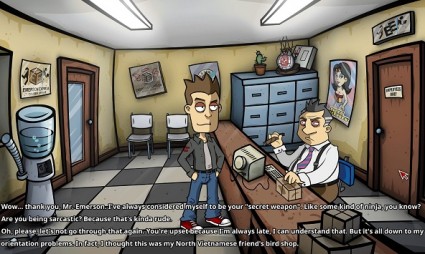 Dialogue options can be long winded…

Being not suitable for work or any sensitive ears grants Randal’s Monday a strange kind of charm, and the subtlety of sarcasm coming through adds a unique brand of humour. Of course, humour in games is a tough thing to do and, as a result, there can be more misses than hits depending on your sense of it. I found Randal’s Monday to be funny most of the time, however, but then I also like Jeff Dunham, so your mileage might vary.

The main gameplay is extremely old school, which may or may not colour your feelings for it. Whereas something like The Walking Dead feels more like a third-person game at times and the dialogue options take priority over inventory items, here you’ll be picking up almost everything in sight and keeping it in your inventory until you have to combine it or use it on someone or something in the environment.

This creates an issue where you have to try and figure out the developer’s logic to make it through the various puzzles and progress. The problem is that the developer’s logic can be on the esoteric side, so the solution to a given puzzle might not be as obvious as the ‘just think logically’ loading hint would suggest.

For example, an early puzzle involves using a cocktail to knock out a priest (don’t ask), and is solved by using a battery, a razor blade and some rat poison. Yet adding a battery and the blade to a drink isn’t exactly what I’d call obvious. This issue crops up at several times throughout, resulting in a lot of using everything on everything else until something sticks and might unlock the next bit of the puzzle. 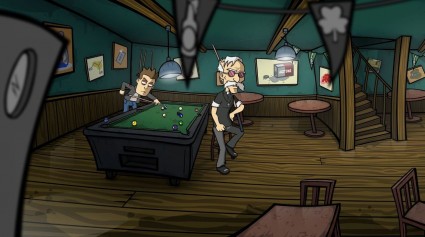 Meet Father Roy, he is a mute alcoholic priest.

The two-fold effect is that the game reminds dedicated to its old school roots, but can become increasingly frustrating as you spend a silly amount of time just trying to work out what you need to use or combine to move the story along. The answer isn’t necessarily the most obvious one, and the repeat response from Randal of ‘If you think that’s logical you should stop playing and go sit down for awhile’ gets incredibly annoying.

A further hindrance to this is the fact that Randal’s Monday will sometimes only let you do what you know is the right course of action after you have done something specific, like talking to a specific person. This can include combining items, and that person might be several screens away forcing you to do a lot of backtracking.

A hint system does help with this, but is broken down in strange ways so that you can potentially spoil the next few minutes for yourself by being zealous with the next hint button. At least it is in there, because it can be hours of frustration if you don’t sit and literally click everything on everything.

At least it’s nice to look at, with a very cartoony art-style that wouldn’t look out of place on a late night TV cartoon. In the fact the whole game lends itself to that, as the dialogue can get so long in spots that you’re literally watching a cartoon play out, though one that doesn’t animate all that much.

It might not have each scene filled with animation, but everything is bursting with movie, game and pop culture references. One scene might contain a companion cube, Q*bert poster, pinball machine or a Stay Puff Marshmallow Man doll, while others will have Halo swords, Lightsabers and not too subtle references to Wonder Woman.

The characters will often break the fourth wall in pursuit of a joke. If you love that stuff, as I do, then all this is right up your alley, but it honestly doesn’t add that much apart from generating some smiles, adding to the overall charm.

So, it will make me laugh?

Your enjoyment of Randal’s Monday will depend entirely on your sense of humour. It isn’t the most intellectual writing on earth, so if you find crass humour off-putting, then this isn’t the game for you. That said, if you enjoy Kevin Smith movies then Randal’s Monday is absolutely worth a play.

By being so rooted in old point and click sensibilities, it does provide nostalgic fun, but this also means that you be fighting logic that might not be so obvious. If that is what you want, then Randal’s Monday hits all the spots.