I’m going to be honest. I’m a bit late to the party on the whole Resident Evil thing, my only foray into the franchise being Resident Evil: Revelations on the Nintendo 3DS. So when Capcom released a high definition version of the GameCube Remake, I decided it was about time I gave it a crack.

I’m glad I did…The Resident Evil HD Remaster puts you in the role of either Jill Valentine or Chris Redfield, members of the local Police Department’s S.T.A.R.S. team. While investigating the disappearance of agents in the woods, your team is attacked by some not-so-friendly zombie dogs. Seeking refuge in a nearby abandoned mansion, you find that some of your team is missing and it’s up to you to find them and solve the mystery of the mansion.

I won’t go further into the story; that would just diminish the sense of discovery as you try to work out just what the bloody hell is going on. Playing as Jill or Chris brings about minor variations in gameplay and plot points, but you’re essentially getting the same experience regardless of your protagonist. 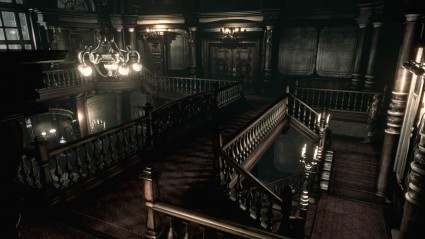 Looks so peaceful – What’s the worst that can happen?

Resident Evil HD is definitely a product of the late 1990s. The backgrounds are pre-rendered, with a fixed camera that relocates as you move through the space. Those accustomed to the freedom of a controllable camera may find this frustrating, making it difficult to see what lies ahead. Having said that though, it does add to the tension, often requiring you to use a well-placed mirror to see what’s around the corner, or a scene change finds you face-to-face with something you don’t want to be face-to-face with.

The original ‘tank controls’ from Resident Evil are still available, although there’s the option to use the ‘alternate’ control scheme. This means your character moves in the direction you push the thumbstick, which can get a bit tricky when the camera change causes a perception shift, but it’s good that your character will continue to move in the original direction as long as you don’t release the stick. Purists will argue that the only way to play Resident Evil is with the tank controls, but that meant an additional layer of difficulty I decided I didn’t need.

The atmosphere is fantastic. The visuals and sound work in conjunction to place you on the edge of your seat, be it an abandoned hallway lit solely by the lightning outside the windows, or the empty dining hall echoing with the sound of the grandfather clock standing sentry against the wall.

That’s not even mentioning the distant groans and howls of those hell-bent on snacking on your entrails. The 16:9, 1080p visuals look spectacular, although you do have the option to revert back to the original 4:3 aspect ratio if you wish. The latter serves to make things even more claustrophobic and heightens the tension of not seeing what’s coming up next. Playing in a darkened room with good headphones is an experience not to be missed. 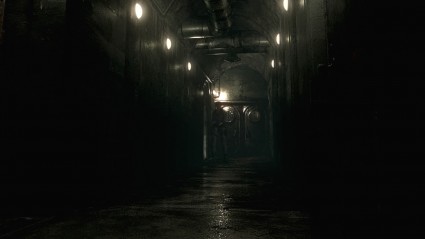 Resident Evil HD wouldn’t be the same without the scares – of which there are plenty. There’s a multitude of groaning creatures stumbling towards you, or jumping out of windows and cupboards. You’ll find yourself confidently striding into an already cleared room, only to discover it’s now populated with bigger and badder foes, catching you unawares – possibly even causing a cry or bit of bodily fluid to leak out of you. The creatures vary from your regular undead, to bigger, faster, and more resilient nightmares, plus a number of bosses to test your mettle. You will die, a lot. You’ll even be awarded a trophy called ‘Get used to it’ the first time you shuffle off the mortal coil, just to reinforce the point.

The thing I like the most about Resident Evil HD as a relative newcomer is the reminder of how games used to play. There’s no hand-holding here; you’re being left to your own devices to work out what to do and why. This was daunting at first. The mansion and surrounds seemed so big and full of locked doors I doubted I’d find again once I held the right key. Exploration and puzzle solving is the order of the day, requiring considerable backtracking as items are discovered to help further solve the mystery. As this happens the mansion starts to feel smaller and more accessible, reducing the time you spend wandering around lost.

One of the criticisms of the later Resident Evil games is that they have become removed from their survival horror roots, focusing more on blowing away the bad guys, with ammo and health aplenty. This is certainly not the case with Resident Evil HD. Resource management is essential for survival. There’s a reluctance to blast an assailant away, just in case there’s a bigger and badder one around the corner. With limited slots for carrying items – 6 or 8 depending on your character – deciding what to carry with you and what to leave behind is crucial. 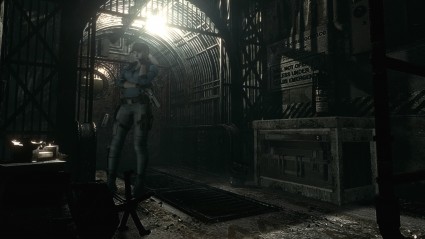 It’s okay, take your time. I’ve got all night.

It’s not just your ammunition and health which is in short supply. There’s no autosave or checkpoint system, with progress being saved using old typewriters and ribbons, of which there is limited number. There’s a real risk/reward at play as you ask yourself: ‘will I save just in case, or will I keep the ribbon for later when I really need it?’, knowing that if you die you’ll have to redo everything since your last save. Towards the end I discovered that I had been a bit too frugal with my ribbons and had quite a few left over. I had to repeat significant portions at times, which I wouldn’t have had I been less reluctant to save. It’s a trade off.

The save system probably had the biggest impact on the way I played Resident Evil HD. Most modern games allow a quick 15-30 minutes of play, with checkpoints saved as you go, allowing you to pick up from where you left off when you return. Resident Evil HD requires a bit more time commitment so as not to waste ribbons. I found myself only playing when I was sure I could dedicate a considerable amount of time to justify the use of a ribbon. On the rare occasions when I did have a quick session, I used that time to explore and develop a plan of attack for when I had more time. Running with multiple save files, just in case you made a game-breaking decision, is another skill from a bygone age, and one which is very useful here. 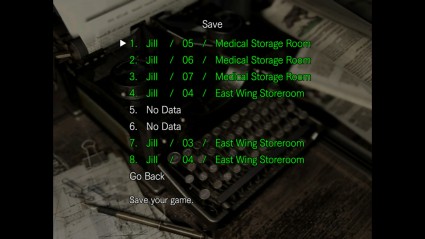 All in all it’s not a long experience. My playthrough with Jill took just under 12 hours, but there’s considerable replayability, especially with the choice of two characters. Each playthrough unlocks additional features such as skins for your characters, and trophies are awarded for 5 hour and 3 hour speed runs, giving a lot of incentive to keep returning. Your progress can be synced online via www.residentevil.net, allowing you to see how you fare against the wider Resident Evil community, and what challenges still await you. I found the sync process sometimes clunky, but it’s a great touch for the completionists out there.

A fresh lick of paint on an old classic

Personally I’m glad Capcom didn’t alter the Resident Evil experience and bring it more in line with modern expectations. Despite this being my first exposure to it, I appreciated the return to the style of old. It was nice to be reminded of how unforgiving and downright frustrating the games of the late 1990s were, but at the same time just how rewarding they can be when the penny drops and you make it out the other side.

Although the old-school feel won’t appeal to all – especially those used to more gentler, modern games – I have no hesitation in recommending it. It’s a great throwback to times of past, but with modern-day bling.