Review: Call of Juarez: The Cartel

Call of Juarez: The Cartel is the third game in the Western First Person Shooter series from Techland, and moves the series from the badlands of Mexico to a modern day setting on the streets of Los Angeles. That is not to say that there aren’t still some links to its predecessors, with a few levels still based in the Mexican planes, and both the chief hero and villain being descendants of those in the earlier titles.

Out now for both PS3 and Xbox 360, and with a PC version due in September, all the major platforms are covered here. Read on as I pick up my six-shooter, to see if the modernisation has helped or hindered what has become something of a cult series, since its debut back in 2006.

Billy the Kid
Some of you may be aware that the single player campaign story has caused something of a stir, with some quarters even calling for COJ: The Cartel to be banned. The game tells of the Mendoza Drug Cartel who bomb the DEA building on Independence Day, killing seven Federal Agents, including Patrick Stone. In response to this attack, a joint task force is constructed: Ben McCall, an LAPD Homicide detective and Vietnam Veteran who served with Stone, and is the son of Ray McCall (hero from the previous game). He is accompanied by Kimberley Evans, an FBI agent, and Eddie Guerra of the DEA. You can play the game as any of these characters alone or via co-op, and embark on a quest to get to the bottom of the bombing, and break up the Cartel.

As you make your way through a twisted tale of drug, people and weapon trafficking via a series of classic Western-style shootouts, you will need to keep your wits about you, as each character has their own hidden agenda as well as the shared aim of bringing down the Mexicans. Primarily, these take the form of collectibles dotted around the game world that you need to pick up, out of sight of your companions, while you watch to ensure that they aren’t collecting their items at the same time.

Butch Cassidy
COJ: The Cartel takes the form of a First Person Shooter, and is very much a linear experience, leading you through the entire game by a white dot telling you where to go. There is little option or reason to veer from this path, as even the “hidden” items are highlighted when a certain distance away, even if you are in a different room.

As with most modern shooters, RT is fire and LT aim; LB throws a grenade, while RB cycles through your three available firearms. These include two pistols which can be dual wielded, and a higher impact weapon which can be a rifle, machine gun, shotgun or rocket launcher. Initially you will have a very small number of weapon options, but as you progress through the chapters and level-up through collection of the hidden agenda items, you will unlock a total of twenty-nine firearms that offer you a few different styles of playing through the game, and therefore, a little variety.

The right analogue stick moves your view, while the left one moves your character; B makes you crouch or stand, A is jump and Y reloads. X, as always, is the action button, and a press of the right stick is mêlée. The unique control point is Concentration mode, which is earned by taking out numerous enemies. When your Concentration meter is full, a press of left on the D-Pad gives you a short burst of slow-mo, where you can take out your enemies at will.

When you are unarmed, you can punch with the two trigger buttons and block by pressing both together; fortunately there aren’t too many of these sections, as the collision detection is truly awful and just a couple of punches are enough to take out your opponent, regardless of size and weight. This is something of a joke when you play as Kim, and knock out three bouncers in five seconds on one level. 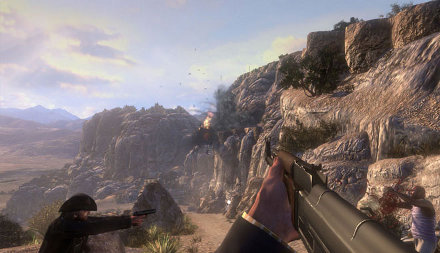 Dust is always in the air.

As mentioned earlier, you have the option of controlling any of the three main characters, and although the main story and campaign gameplay are much the same, the hidden agendas vary depending on who you choose. As Evans you are looking for guns, McCall has walkie talkies, and Guerra has to find packs of drugs, as he seeks to deal his way out of a gambling debt. These hidden agendas offer a genuine reason to replay upon completion, should you be able to stomach the game’s many flaws three times over.

Talking of flaws, let’s begin with the cover system. There is no button for taking or leaving cover; instead, you have to basically walk into a wall/rock/crate etc., which causes your player to lift their armed weapon up in the cover pose. This doesn’t seem to offer you much protection, and at best, is a bit hit-and-miss. When you consider the fact that there are certain sections that require you to move between cover to perform specific take downs, this appears a little odd to say the least.

The game itself, although covering fifteen chapters, is fairly short and incredibly repetitive. You’ll find yourself driving to a start point, where you will face a collection of baddies in a shootout, before walking to another area for another shootout. The cut-scenes are well pieced together but seem quite long compared to the gameplay parts, and don’t exactly blend into the action either, so the game can feel a bit fragmented.

On a positive note, the pre-chapter lobby sees the three characters usually, although not always, round a car. A duffel bag containing all the unlocked weapons can be selected to choose from for the upcoming mission, and a press of the start button opens up the forthcoming mission for co-op play, with the choice of public or private. These lobbies give a rare feeling of thought and polish, and fit into the style of gameplay far better than the pre-mission news reels. 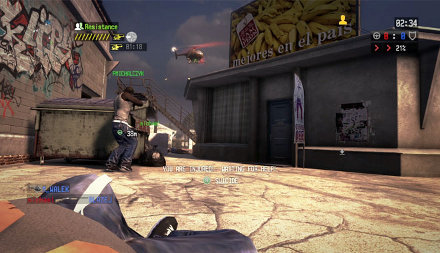 See no evil
Visually COJ: The Cartel looks more like a decent PS2 or Xbox title, rather than something that should be gracing modern-day consoles. The menus are incredibly dull with an abnormal amount of grey and black, no animation, and ridiculously basic setup. Admittedly, the opening chapter involves you setting fire to marijuana fields, but the fogging is somewhat over the top. As a result, you can’t see anything at all, an early sign of the pretty poor draw distances throughout, generally masked by buildings (which look awfully similar), or internal areas which can give the impression of running around in circles, as rooms can look pretty similar too. What’s more, during the driving sections, if you stop and wait on the road you will see other vehicles just drive through you, literally, without causing damage.

In fact, there is some terrible clipping throughout, to the point that characters’ heads actually detach from their bodies at times. To add insult to injury, the loading screens, which are mainly presented in the form of a news bulletin, just look awful. These display a news reporter on the right and a banner across the bottom, with some photos on a satellite map in the main display. The photos fade in and out of focus, for a reason I am yet to discover, and the map basically suggests that there is an incredibly large hurricane in the area throughout (which never carries into a level by the way).

On the plus side (yes there is one), some of the cut-scenes actually don’t look too bad, and to clutch at straws, COJ has some of the best modelled video-game women you’ll have ever seen.

Hear no evil
Audio is (again) not particularly great, with the standard voice snippets throughout pretty limited, and therefore very repetitive. Voice acting is okay on the whole, if a little colourful (you couldn’t play this with your kids in the room), but you do have to look directly at someone to hear what they say. This is something which is not exclusive to COJ, and is possibly one of my biggest issues with modern-day games. Why do developers kill the sound when you turn around? Surely the entire world knows that you can hear people standing next to you, regardless of where your eyes are looking?

The background music is fairly low-key, with a recognisable Western theme in the mission lobby, and some tension building during the many shootouts. Weapons and explosions alike sound good enough generally, but vehicles don’t sound particularly great.

Gunfight at the OK Corral
Multiplayer takes the form of a ‘Cops vs Criminals’ setup, and can be either a simple Team Deathmatch, or a Mission-based effort. Missions can be quite varied, and each game is a best-of-three affair as you are tasked with defending or storming an area or setting a bomb, for example.  There are four maps to choose from which offer up a decent amount of variety, and the missions available depend on the arena chosen. 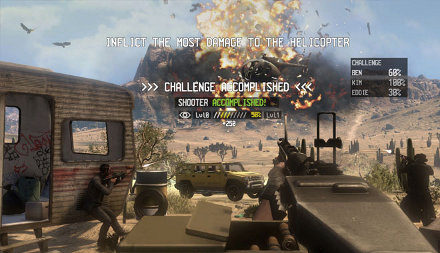 Lobbies take the form of an office for cops (I’m guessing in a police station, although there is no obvious marker), or a warehouse/garage for criminals. Each lobby contains a shooting range to get your eye in and test your weapons, and you can choose from a number of skins on either side, although only two are open for each initially. You can also choose your weapon class and customise this, as you unlock more weapons by levelling up. Speaking of which, levelling is totally independent of single player progress and works on an XP basis, where points are given for saving an ally, kills, wins, objective completion and so on.

One final element of note for the multiplayer is the addition of a partner system, where you can earmark one individual member of your team as a partner, then if you work together you gain extra XP and boost each others’ stats.

Dirty Harry
Fortunately for us gamers, we live in an era where AAA titles are not that hard to find, and the FPS genre is probably the one with the biggest depth of quality titles currently available. For developers, this means that anything dropping below that standard will often receive excessive criticism. I began this review desperately not wanting to fall into that trap. However, despite the fact that I did get some enjoyment from Call of Juarez: The Cartel,and did want to keep playing to see how the story would end, I simply cannot avoid the fact that overall this is a poorly presented, linear game that simply falls well short of its competition.

Multiplayer isn’t bad, but in spite of the addition of mission based shootouts, has nothing particularly new or unique to offer. Everyone loves a decent bit of co-op, but unfortunately, on COJ, that means playing through a fairly rubbish game with friends. All of this adds up to a sub-standard shooter that is out-classed in every department by any one of a number of other titles on the market. For that reason, I can only give it the big red badge below.