Hydro Thunder: Hurricane is the latest game to fall under XBLA’s Summer of Arcade promotion and will be available from Wednesday 28th June at 1200MP (that’s £10.20 in English money) courtesy of Vectra Units.

I am going to be completely honest and admit that I had little knowledge of the game when I was handed the review code and as such, had no idea what to expect. So the question is does it drown in mediocrity or blow you away, read on to find out.

Hydro Thunder is a boat racing game that sees you compete in various events to gain credits by finishing in the podium positions. The credits in turn unlock more events and newer, more powerful boats. As you fire the game up you are presented with only the standard “Race” option, a single track, one boat and nothing else. However, it will not be long before you are sitting in at least a Pro level boat with some fifty events to compete in. 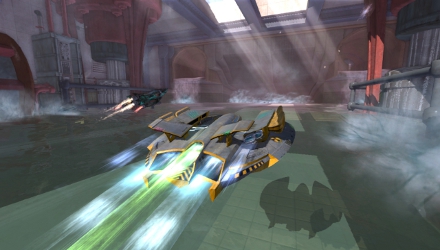 It is a boat, honest

Gale force wind
You will find it easy to pick up and play as the controls fall in line with most racing games on the market. RT works as your accelerator and LT your brakes. A will activate your boost (if you have any stored) and X works as jump (again only if you have boost). You can also cycle the camera view with the Y button.

In Single Player there are four event types. The standard race sees you compete against fifteen other drivers in a straightforward ‘first past the post’ race. These are separated into three categories of Novice, Pro and Expert with each category giving you tougher courses and stronger opponents. Along the way various items can be collected to open up shortcuts and unlock bonuses. You can also pick up boost charges to add to the pace of your chosen vessel and “draft” behind an opponent for an alternate speed boost.

Ring Master event’s pit you against the clock. It is your aim to make it to the finish line in the quickest possible time passing through the rings along the way. Each ring successfully navigated earns some boost but any missed will not only wipe out your current boost meter but also give you a time penalty. This can be a little frustrating as you hit fifteen gates in a row giving you a massive boost meter and then because you are going so quick you just, just, miss a ring wiping it all out and forcing you to start over. The Pro and Expert levels are also quite unforgiving in the times needed to gain a trophy and some rings can only be reached if you have some boost stored up so one tiny error can literally be the end of the race.

Gauntlet again sees you in a time trial situation, this time though instead of gates to aim for you have barrels to avoid. These act as mines that detonate at the slightest touch seriously, affecting your lap times. Fortunately the collision detection is sound but again the later levels are pretty unforgiving on the trophy times and it can get quite frustrating when you end up a few tenths off because of a single error in judgement. 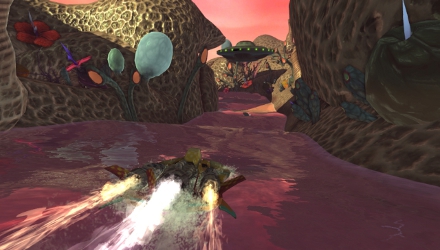 Look at the lovely water

Finally we have the championship mode which sees you compete in multiple events against fifteen opponents. Points are awarded depending on your position in each event and at the end of all events the trophy goes to the racer with the most accumulated points.

It is in this mode that the unforgiving nature of the game can really hit you. A couple of slight errors on a ring master or gauntlet event can destroy an entire championship as first or second becomes tenth or eleventh and any chance of gaining enough points for a trophy literally explode in your face!

Hurricane Katrina
As far as Arcade games go, Hydro Thunder is up there with the best of them graphically. In fact even when comparing this to a full title it stands up well. Backgrounds are clear and crisp, colours are vibrant and the all important water effects are as good as you will see. It is perhaps lacking a little in detail, but I do mean a little. The courses are nicely varied as well and there are some excellent extreme weather effects on some of the levels, which add to the challenge and bring an extra layer to the graphical sheen.

The local split screen mode does have a negative effect on the visuals and during this mode there is a hint of slowdown during the more intense moments.

Thunder and Lightning
The background music in the menu screens and races reminds me of classic title Wipeout. Upbeat, techno style tracks are very much the order of the day. In race this can be changed with a right or left press of the D-Pad but unfortunately from my point of view it is all much the same. The sound effects are fairly good also as boat motors, water splashes and explosions are all well executed. There is also a radio controller who will tell you the alarmingly obvious like “we have boost, let’s use it” or keep saying “this is insane” at big jump.

Stormy waters
Multiplayer can be played locally with up to four players in split screen. Unfortunately I have not been able to get another three people in my living room to test the four way split screen but did test with two and the feeling of speed you feel in the single player mode is not quite there. As mentioned above the graphical sheen do decrease a bit also. As you would expect everything is a little smaller as well and I have to say I find it difficult to see how a four way split screen would be feasible on a TV under 40”. 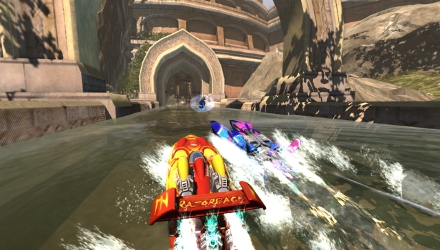 Across Xbox live you can have up to eight players in an event (with up to four on one TV). Events take the form of either a standard race, which is played in the exact same way as the single player race, or a Rubber Ducky race. This splits the field in two with one racer on each team designated as the Rubber Ducky, the aim is to get this team member over the line ahead of the opponents.

The Rubber Ducky is a nice alternative to the standard race fare and in the limited games I have managed to get going you can see the potential it holds. Three team members doing everything they can to block, barge and generally destroy the other Rubber Ducky while trying to free their own at the same time.

Sunshine on a rainy day
Hydro Thunder: Hurricane is certainly not without flaws. It can be brutally unforgiving at times and more than a little frustrating because of it. Also, due to the sheer nature of the Pro and Expert races it can be easier to tone the event down by selecting a Novice boat at times. Having said all that, this is still a very good arcade release. It looks and feels good and on the whole it is very enjoyable to play. There is enough diversity to the events to keep race fans and casual gamers interested alike, and it is a solid challenge to acquire all the trophies on offer.

On top of all that with fifty events including ten championships, each with hidden shortcuts and collectable packages to find the replay factor is pretty sound, and then there is the multiplayer…