You’ve cheated at Just Dance. You might as well own up and admit to it now. For the last few years, it’s been easy to pretend that you’re working up a sweat by just flicking a Wii Remote up and down, side to side. Heck, you may even be preparing to cheat when you get your paws on Just Dance 3. If that’s true, just know that I’m onto you, and you have issues.

However, while you may be able to get away with it on the Wii, Xbox and Kinect have other plans. For the first time in the Just Dance series, you will need to use all of your body to get any sort of score. It’s everything the series has been striving for since its inception and now it’s finally in place, it seems the days of hax0ring the dance floor may be over…

Yet, while Kinect seems like a natural fit for the Just Dance series, the burning question is, did Ubisoft do a good job of translating it?

Dance Central showed us the amazing dancing possibilities with the Kinect sensor last year and since then, collective dub-steppers and disco kings have been ripping up their living rooms with eclectic endeavours, in hopes of bringing new-found finesse to their outdoor boogeying.

Naturally, publishers and developers are eager to dive on this new-found craze, grinning from ear to ear at the money train that’s been built on the carpet-burned soles of a new juking and jiving gamer. While many of these games have been created from the ground up to focus on making the most authentic experience possible, other developers are seeing an opportunity to bring existing franchises into the fold with new-found mechanics.

In my eyes, Just Dance 3 is the first real contender that Dance Central has had contesting for its crown as King of the Kinect Kick-Stepping. It has the financial backing, the fanbase and the gameplay to take this fight to places other wannabes can only dream about, and fight it does… 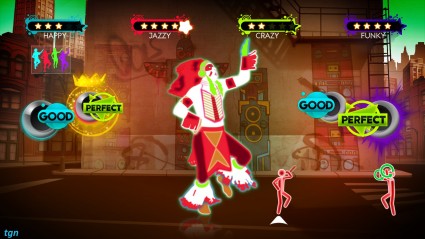 T Hawk was struggling to get over the glory days...

Video-games killed the Night Club star
While Just Dance 3 doesn’t seem to offer much more than Harmonix’s little dreamboat in terms of options, what it does with those options is effective. As soon as you slot in the disc, you can easily select a song to dance to, choose your difficulty and jump right in. Granted, not all the songs will be available to you from the very beginning (you’ll need to get unlocking) but there’s still a vast range there from the offset.

One area that instantly irritated me was the menu screen. It’s faster than the clunky Michael Jackson: The Experience, but still trails like a snail when compared to Dance Central. Admittedly, menu navigation on Kinect is a tricky thing to lockdown, and this is better than a lot of the dross that’s already there, but just by setting up Just Dance 3 for the first time, you know that Ubisoft could have done a lot better.

Even more irritating than that, though, is the way in which you select your difficulty. Half the time, it was picking up my head as the controller, and by the time I was moving myself into a position to select Normal, it was throwing me onto Hard! Sure, I can handle hardcore head-banging, throw it my way, but the rest of my body struggles to keep up, ya know?

Fortunately, the game does have a nice steady learning curve, which is never overly punishing but will definitely make you build up a sweat. Unfortunately, there’s no ability to slow down a song and break it down, the game instantly throws you into the action, and the first time you play, you better be good at learning on the fly. There is an opportunity for players to learn some of the choreography in another mode by mimicking the moves of their avatar, but when compared to Dance Central’s extensive teaching methods, Just Dance 3 is exposed as the syllabus-following teacher that doesn’t actually know anything about their subject matter. 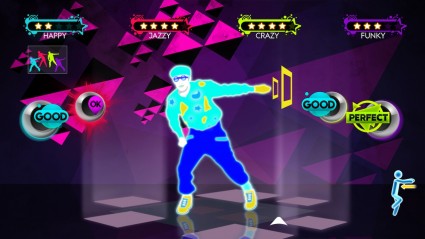 Get your groove on!

So, you just have to adapt. Just Dance isn’t exactly hard to follow; there are usually only a set number of moves you have to interpret in order to gain a modicum of success; it’s mastering them that presents the difficulty. The moves are indicated by human-shaped icons that scroll across the bottom of the screen, which you’ll need to perform. Although, just by watching the character on-screen, you can also pre-empt the move about to follow, and prepare accordingly. Depending on how well you fare, the score tracker on the left-hand side rates your progress, and, builds towards your overall star rating at the top of the screen. There are also things called Golden Moves which pop up throughout your routine. Perform these and your score is doubled!

Of course, the more you dance in the game, and the better your performances are, the more Mojo you’ll earn. Mojo allows you to unlock more choreography and modes, such as Simon Says, as you go along. In that sense, there is a lot to get out of Just Dance 3, and you’ll definitely find that it is a game which keeps giving.

In addition to all that is the Sweat Mode. This speaks for itself, and allows the player to exercise by dancing their way through consecutive routines. However, this is very poorly executed, as the game fails to offer an estimation of the amount of calories you’ve burned (actually a devolution for the series, as this was offered in Just Dance 2…). Although, there are predefined set lists available to the player in Sweat Mode, allowing them to choose the type of music they like to dance to. Essentially, Sweat Mode is there, but it’s probably not the best way for you to dancercise your way to a new you.

The real question is, does Kinect tracking work in Just Dance? The answer? Mostly. It’s not perfect by any means, and sometimes it won’t pick up the simplest of moves, yet will register your efforts at something much more technical, even if it isn’t the best of renditions. Sometimes, you can even perform moves perfectly and the game doesn’t register it at all. It’s the mixed bag you might expect from Kinect tracking, but 90% of the time, I’d say the game does a good job. 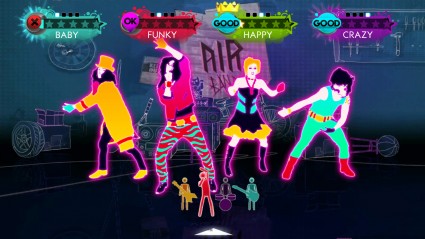 It's the neon colours that makes it!

You are beautiful…
The best element of Just Dance 3 are the graphics, and the awesome videos that accompany each song. Some of them border on the genius, and absolutely bring life and soul to the game, separating it from being ‘just another dance clone’. When playing ‘This is Halloween’ (Yes, that song from Nightmare Before Christmas) you’ll be dancing with a Dracula and Pumpkin Head, and when you fire up ‘Video Killed The Radio Star’, you’ll be matching the movements of a man with a TV for a head. The creativity in place brought a huge smile to my face, making the experience much more entertaining. Heck, you can even morph your Avatar into a Power Ranger!

Of course, this is the first time High Definition has made it to Just Dance, and as such, everything feels more lively and fluid than ever. The dance routines are less stunted, and easier to follow. The scenery is even partially mesmerising. JD3 looks very different than any other dance game on the market today, making the experience altogether quite unique. Ultimately, the game has hugely benefitted for the HD transition.

LMFAO
Thankfully, Just Dance 3 has a diverse and frankly, quite excellent set list. Some may argue it focuses a bit too much on pop music, but that’s sort of the point, isn’t it? You’ve got old favourites like ‘I Don’t Feel Like Dancin’ from the Scissor Sisters, new fads like ‘Teenage Dream’ by Katy Perry, and retro classics like ‘No Limits’ from 2 Unlimited!

Overall, the game does ship with a large ensemble, which will, naturally, be bolstered by regular instalments of DLC (some of which have already made their way onto the marketplace).

The game also plays around with the music slightly in some unlockable modes by remixing some of the tracks. Some of this is quite cleverly done and even makes some songs sound better! 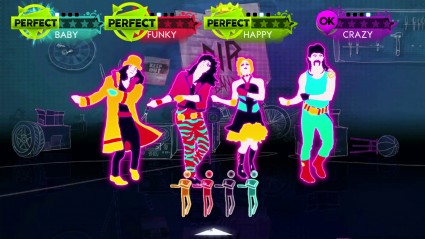 Tango in your parlour…
Multiplayer is back in Just Dance 3, and in a big way. For the first time, four people can dance in front of Kinect at the same time, all working on the same song. As you can imagine, this can be a bit of an ask of any normal living room. Some people can barely set up Kinect to pick up one person, let alone four. Surprisingly, however, this does work quite well if you have the space to accommodate it. It’s not perfect, and you’ll probably end up elbowing your best mate in the face once or twice, (alls fair in love and dance) but with the formation changes, spin moves and cumulative score, it has a strong teamwork focus, and actually makes a lot of the mode, as opposed to just trying to be the first out on the market with a new gimmick.

When you consider Dance Central 2 is offering two people to play in front of Kinect for the first time in that series, already you can see Just Dance 3 has a very competitive focus. It also makes for a quite entertaining party environment, or at least, provides the potential for an ultra-violent one…

Another cool feature exclusive to Xbox and Kinect is Just Create mode. Here, you can actually record your own 8 step routines during certain sections of any song, then replay them at any time. This is a great way to create challenges for your friends, or for you to train on certain steps, or even just to have a bit of fun. The best part is, you can upload your choreography to the Just Dance Community for others to try. This is a very cool, novel idea that again, makes great use of the Kinect peripheral.

Just don’t?
If you’ve been looking for a great alternative to Dance Central, then this is it. It’s not superior to Harmonix’s showcase title, does suffer with some technical hiccups and Kinect tracking issues, but it’s infinitely charming, and openly accommodating.

Just Dance 3 offers several new, unique features which have not been seen on Kinect, and, amazingly, they do work very well. It’s probably not the perfect port that Ubisoft would have wanted, but Just Dance 3 has made it to Xbox and Kinect, and its done it pretty darn smoothly!