For those of you not familiar with Moto GP, it is effectively the Formula 1 of motor bikes. The season comprises eighteen race weekends across fourteen countries and includes insane speeds, superstar riders and all sorts of cutting edge technology just like its four-wheeled cousin.

Moto GP 10/11 is the latest video game iteration of the sport, developed by Monumental, and follows this year’s schedule. Does it match up in video game format to Codemasters F1 title? Read on to find out.

The game offers you the opportunity to play through the full World Championship of each of the three classes separately, taking your pick from all the official riders or competing in a Challenge mode, again across a full World Championship at any of the classes. Challenges range from hitting top speed, overtaking a specified opponent in a given time-scale, completing a section without any errors or sticking to the perfect racing line through a corner. The races begin with a time limit and extra time is added for doing things right and completing these challenges as they arise. If the timer runs out you can continue up to three times and then it’s game over. There is also a simple time trial mode which allows you to take to any one of the tracks just to get some practice in.

On the track, RT is used to accelerate and LT is your main brake, while X is the rear brake which forces the back wheel to step out in the corner. A tucks you in behind the windshield to help with your drag giving you a bit more speed in the straights. Gears are Y and B for up and down respectively and the bumper buttons select the camera with RB changing the view and LB causing you to have a quick look over your shoulder.

There are a number of assists which can be switched on or off designed to make the game more accessible to newcomers, while still allowing the hardcore total control of their machines and things like gear ratio and suspension can be altered to change the balance of your 800cc Superbike so it’s just how you want it.

Racing line
The career mode allows you to pursue your own career from the 125cc class up through Moto 2 and onto the ultimate, beastly Moto GP machines. This makes up the main body of the single player experience and is hugely involving once you get started, though not without its drawbacks. 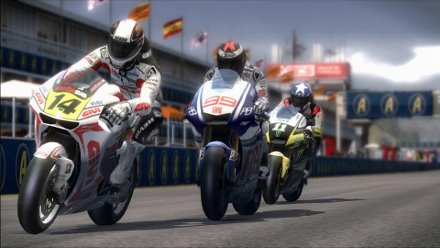 After naming your rider and team, you select your bike from one of two 125cc steeds, design your bike, livery and racing leathers before taking to the track. You also need to set your nationality and your home race. During the season any bonuses gained on this circuit are doubled and it’s from these performance bonuses that you earn cash to hire staff, research parts and upgrade your bike.

The main hub is the calendar, where you go to enter the race weekends and can view your past results and up-coming races from here. The race weekend itself comprises three parts; Practice, Qualifying and the race itself. You only need to participate in the race but you are graded on your performances in each and these combine for an overall grade for the weekend; the higher the grade, the better your rep and the more cash you will earn so it is worth going through all the stages. The calendar also lets you see the timescale of any ongoing research, when you’ll next be paying your staff, plus you can see any upcoming wild card events, which are another way of boosting your reputation and cash.

Within the menu you have the Manufacturers area, where you can choose from any of the offers currently available to you and you can change your manufacturer at any time during a season. Then there is the Bike Setup to tweak your difficulty, assists and bike settings. The Branding Area allows you to make changes to your bike livery and leathers design, while Manage Staff is obviously where you do your hiring and firing.

Hiring staff opens up additional areas, such as sponsorship when you have a PR Manager, this will reward qualifying and race performances with additional cash bonuses, allowing you to use another key staff member, the Engineer, to carry out research on new parts. These can then be applied to your bike to upgrade performance.

There is no doubting that the Career mode has a huge amount of depth to it and it allows you to really get involved in the management of a race team to develop your ability in-game as you progress up the ranks, but it wont mask the genuine challenge of mastering the Moto GP bikes with no assists on. It is also in this main single player mode that my biggest problem with the game becomes clear because more often than not I just felt like I was going through the motions. 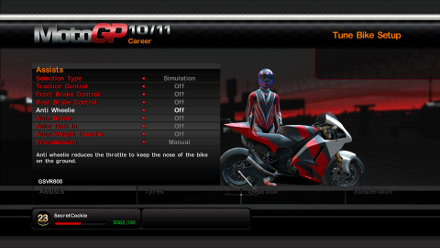 Nice gimp suit you have there.

Practice and qualifying are more beneficial, especially early on, for cash alone though, rather than any benefit they may give you on the track because here is where overall polish (or lack of it) really comes to the fore. The menu’s are easy enough to navigate and are self-explanatory but there is no real flow. An example is that if you set an engineer to research a part and this is due to finish before the next race weekend starts, you can’t jump to that date and go and apply the upgrade. You have to go to the next race weekend, then exit that and go back into the menus to the upgrade area to fit the part.

Also, when sitting in the pits during a practice or qualifying session, you just have a list of the other riders and their current best time and grid position. No breakdown of sector times, no overview of your own performances, no information to help you get that bit extra out of your bike to make the difference.

Nice Leathers
Overall the graphics in Moto GP are decidedly average. The nature of the beast means that the tracks are effectively devoid of scenery. The development team have tried to add features where possible to add to this, with the odd chopper or plane overhead and a few parked ambulances track side. This is commendable and is true to the subject matter so we certainly can’t complain, and both bike and driver liveries are also true to the real life event. There is also the fact that you can visually see the speed at which these machines travel and the difference as you go up through the classes is extremely well animated and I have not experienced any drops in frame rate during my time with the game, another plus.

Where I have issue is that the simplicity of the racing environment should allow the front end presentation to carry polish, which in all honesty it doesn’t. Menu’s are easy enough to navigate but to put it in perspective the front end is more PES than FIFA, in that there is little shine and everything seems quite basic and blocky. To be honest I can just about forgive this, but what I struggle with is the brief areas of the game where some real class and style can be added to the graphics, like pre race build-up which looks somewhat ropey.

Revved up
The sound is also relatively low-key. Bikes sound impressive enough, but unlike most sport sims there is no commentary and surprisingly, you do miss it. What we have instead is some fairly sporadic mutterings that are used to guide you through the menus and basically tell you your target for the race ahead. There is no mention of weather conditions, split times or comparisons to other riders which might be helpful during qualifying or the race itself and personally, I see this as a bit of missed opportunity. The background music is also largely forgettable overall both in race and in the menus with no real grandeur at all. Considering the subject matter is so full of power and pizzazz it’s all just a bit underwhelming.

Grid position
Moto GP 10/11 offers you local split screen multiplayer, which includes the option to have a second player to take part as your team-mate in the career mode. This opens up the stable-buddy rivalry of real life racing; a quality addition. The game also boasts up to twenty players online for a full race event in any of the classes the game offers. Here you can pick from one of the official riders and bikes or import your career rider for an extra challenge. You can even set up a tournament over any number of races across multiple tracks, opening up the possibility of a full online Moto GP world championship with all your buddies. Awesome. 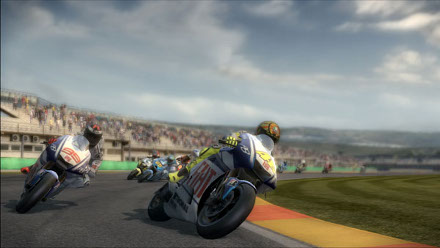 Unfortunately it doesn’t quite live up to the billing as there simply doesn’t seem to be the community to back this up. Online races rarely seem to have more than five or six participants (although I have had one evening’s entertainment where a field of twelve played through an entire championship) and there is often a bit of waiting when you go into a standard quick match while you wait for your matched opponents to finish their current race first. During this time you can view the action in spectator mode and also go into your bike setup to tweak your settings should you wish.

Once all riders are ready, a voting system decides the number of laps, track and weather conditions for the upcoming race and away you go. There are no frame rate issues to worry about and the feeling of speed is every bit as good as the single player affair. One thing I will mention is that if you harbour any hopes of being successful you really need to master the bikes without any of the assists on and this is no mean feat.

Chequered flag
I have to be brutally honest and say that Moto GP 10/11 has been a difficult game to review. Though there is nothing wrong with the game per se; it is something of a challenge to really get into and even harder to truly master. The career mode really shows this by adding some genuine depth to the single player experience, which is more than welcome, but the lack of a coherent hub and the genuine difficulty of playing the game without the assists on largely negates this depth before too long.

Online is similarly difficult to judge; quick races are ok but with limited numbers have something of an arcade feel. Though, if you can get a good number of people together, the option of going through a full Championship is a genuinely enjoyable online experience.

As such, Moto GP 10/11 really is a game for the purists, although having said that, the lack of a stats breakdown during practice and qualifying and the understated overall polish may make even aficionados feel a little underwhelmed.