Outland is a new 2D platform/adventure title of the Old School Prince of Persia variety, developed by Finnish studio, Housemarque, and published by Ubisoft for both PSN and XBLA. In fact, anyone old enough to remember the early Prince of Persia games from the 8-Bit era will see more than a few similarities here; from the running and jumping to the way your hero swings his sword and hangs from ledges. There is very much a sense of nostalgia as an older gamer.

That’s not to say Outland isn’t a breath of fresh air, though, and with a fairly unique graphical feel and a well written audio score to match it has everything you’d expect of a modern day title. So the only question that remains is; is it any good?

Balance or Chaos
The story in Outland is never really fully explained but the basics are thus: Haunted by some freaky dreams, your character (who seems to have no name) seeks advice from a wise man. He tells you of a great battle some 30,000 years ago where the Two Sisters of Balance and Chaos, who helped create the World, now sought to destroy it.

Chaos has again escaped and is looking to take over leaving you as the last hope of the world. You are then tasked with bridging the ancient divide of Light and Dark in a bid to restore the balance. 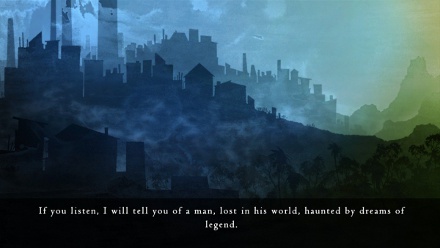 Cha cha slide
Your hero is controlled with the left stick and you can jump with A and attack with X, Y and B as the game develops. At the outset your character is very limited in ability only able to perform standard run and jump actions that include the now mandatory ability to jump off walls. As you go through the game collecting “Mark of the Gods” masks, you will be equipped with a sword and develop the ability to perform a standard attack with X, this can be coupled with up and down to perform uppercut swipes and low shots respectively. Later in the game you gain two extra attacking abilities which are the Smite Attack performed with Y, which is basically a heavy shot with the sword, and a Beam Attack with B. This is your ranged attack, sending out a heavy beam of energy.

Both of the latter options require you to have collected some Smite energy from your victims. You will also gain extra “jump” abilities as you progress. The first is that of a slide performed by pressing down and A and later on you will get a third tier jump function, the ground stomp, performed by pressing down and A while in the air. These extra abilities help you to access additional areas of a level, adding some welcome replay value to the game.

The levels themselves follow the standard Platforming formulae as you go through the world jumping from ledges, climbing ladders and breaking pots to collect coins and extra hearts of energy. The coins can be traded for extra Health and Smite Levels and all these can also be collected from beaten enemies.

Talking of enemies, there is a good variety in Outland. The battle begins with giant spiders as the main opposition to your quest. These appear out of the ground and later from the ceiling. As you progress throughout the game you will find what look very much like Lady Birds, Flying Sea Horses, Jellyfish and Knights standing in your way. The Knights themselves have four different styles which each pose their own challenge, and at the end of each world there is a boss battle.

You can only enter the battle after you have recovered a Key to the Guardian and the Boss’s themselves are typically huge in scale and require you to work out a weakness and follow a pattern to defeat. Again, very old school, and with it both enjoyable and immersive. 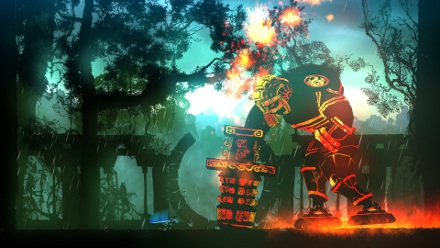 Yeah, well, my dad's bigger than your dad!

Finally we have the key gaming feature of factoring in Light and Dark. Once you have gained the respective powers, your character will be either blue (light) or red (dark). Enemies will also take one of these two forms and you can only harm an opponent of the opposite polarity. In addition to enemies, there are certain areas of the world that can only be reached when you are of the same polarity, for example; platforms that you can’t stand on or walls that vanish. There are also various areas where fire balls of either light or dark are fired out. You will receive damage only if you are the opposite leaving you frantically switching from one to the other using RB as you jump through fire balls onto platforms and over walls while fighting enemies all of opposite polarity.

Outland has a very smooth feel throughout, with very small loading times between the levels which knit together well. The challenge is decent without ever being too frustrating and the puzzles that largely focus around switching Spirits are never so difficult you find yourself stuck for hours on end. The levels also have well structured checkpoints so when you do fail you don’t have to go back too far.

The downside of this is that the game can be finished fairly quickly but there is more than enough to draw you back in to find the remaining Marks of the Gods or Money Vases after you’ve picked up the abilities that allow you to reach the additional areas of the world. On top of everything else, it’s just plain enjoyable. 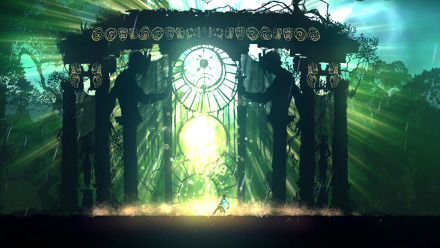 By the power of greyskull!

Outlandish visuals
As soon as you hit the start button, the visuals of Outland really grab hold of you. As the background of the story is delivered the camera pans across the screen giving you an early glimpse of the world you are about to enter. It’s not that the graphics are particularly ground breaking or even overly impressive, it’s just that they give the game a certain atmosphere. Many have likened the visuals to “Limbo with colour” but personally I see that as a disservice to Housemarque’s creative team.

What you have here is a beautifully drawn world that, although largely shaded and dark, is punctuated by some superbly atmospheric use of light and colour. The game is viewed from a greater distance than most platform or action titles which helps to give you a good view of the level but also to enable you to take in the qualities of the artwork.

The main character is wonderfully animated with a genuine smoothness to movement, making running, jumping, sliding and attacking link together effortlessly. Bushes and trees flicker in the wind or as you walk past and when you hang from a ledge your legs dangle realistically. These all seem like simple basic graphical effects but combined as they are they just help to involve you further in the world you find yourself. 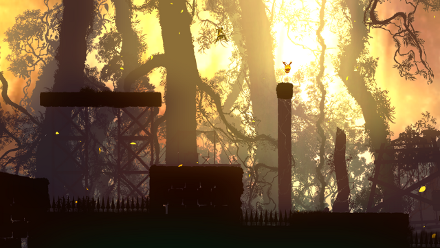 Sounding good
The music is also used as an extension of the game world and helps to create and enhance the feeling of immersion in the Outland universe. For example, the opening level, Origins, is played out in a Tribal style environment and is followed by the Jungle level. Both use a background ambience of soft wind chimes and pipes littered with what you would class as sounds of the rainforest. You then move on to the Underworld level where the sounds are darker and the atmosphere is set by a rhythmic drum. It really does set the scene.

The effects are also nicely done, your footsteps echo as you run around the environment. As you take hits your character gives a groan of pain and when you get down to your last heart of life you can hear your heart pounding in your chest. Attacks bring a swish or swoosh from your sword and enemies give a squeal of varying degrees when defeated.

Punctuating the whole experience is the story-teller. This pronounced, hearty chap delivers all the important background details and updates you of the historical element of your journey between levels or when particular skills are unlocked. As with a lot of things in Outland, it’s a very small, simple addition that just adds to the overall experience and the feeling of involvement the game gives you. 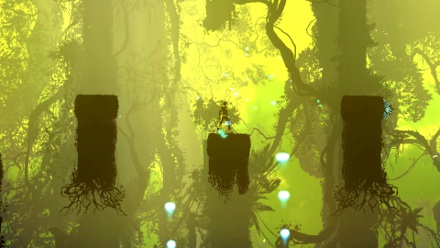 Time to don the blue suit

Double trouble
Outland offers an online Co-op feature that allows you to play through the story over Xbox Live. Additional multiplayer offerings are the arcade mode, which allows you to go back to any level you have unlocked or the co-op challenge.

Co-Op challenges are unlocked throughout the single player game for you to enjoy with a friend online.  Unfortunately, I can’t tell you how good or bad any of these modes are as after numerous attempts to go into a quick game, search for a game or even create a game and wait for someone to join, there just has been absolutely no online action during my time reviewing the title. Shame.

Out of this world
Every once in a while a game comes along that take you by surprise in a good way and those games are very rarely arcade titles. This is not the only way in which Outland breaks the mould. What we have here is essentially a very basic game that reverts to what encouraged most people to pick up a control pad in the first place. It’s simplistic but with well drawn graphics, sound that draws you in, and a gameplay that is just a sheer joy from start to finish.

On the negative side it may be a touch short or too easy for a hardened gamer, but at 800MP Outland is probably the bargain of the year so far and anyone who enjoys gaming will love it.