The last few weeks I have found myself engaged in a battle that has tested me like no other. Every time I think I’ve sorted it out, something comes along to knock me back down to size. All the while I’m wondering what is wrong with me, and why others don’t seem to have the problems I’m having. Maybe I’m just not strong enough to endure. Despite this pain, I keep trying, only to fall on my face again.

‘Yeah, but everyone struggles with Bloodborne, it’s meant to be a challenge’, I hear you say. That may be true, but this isn’t Bloodborne I’m talking about; it’s Ride, the latest motorcycle racing release from Milestorm Studios. I don’t think I’ve experienced a game that makes me question my gaming abilities so much.

This doesn’t necessarily mean that the game is hard; it just means that I’m very, very bad at it. This feeling of inadequacy isn’t helped when I read other publications declaring how simple the riding mechanic is, falling short of a more true simulator such as Milestorm’s other motorcycle racers, i.e. their regular Moto GP releases.

What stands out is that this a labour of love for the publisher, with an almost obsessive level of detail. Each of the 114 bikes on offer are lovingly modelled, from the low-end ‘Naked’ models to the death-on-wheels performance cycles such as the Yamaha YZF-R1. Unfortunately this obsession doesn’t extend to the environment, which, although a competent effort, tends to pale in comparison to the machinery on show. There is at least a good variety of tracks available, covering both road and track disciplines.

For those who like customisation, Ride could be just your bag. In almost RPG-like fashion you can spend a disproportionate amount of time getting your rider’s face just the way you like it; ironic when you consider it will spend most of the time covered with a helmet. You can even tweak the way your rider sits on the bike when leaning, although this seemed to offer little or no change to the handling. There’s the standard visual and tuning options for your machine such as suspension and brakes, although this doesn’t fully open up until you advance in levels. Obviously Milestone wanted to offer riders something above the typical motorcycle racer, but I’m just not sure if it pays off and adds anything to the game. I would have preferred more attention put into polishing the environment. 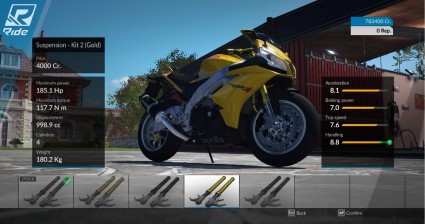 For those who love to customise, your dreams have been brought to life

The gameplay is nothing beyond that which we’ve come to expect, offering World Tour, Quick Race, and Multiplayer mode. The bikes you use in Quick Race and Multiplayer need to be unlocked in the World Tour, but a nice touch is the ability to hire those which are still locked. This comes at no cost, although disqualifies you from any prizes, but it is a nice way to test the bikes on offer.

How does it play? As previously alluded to, I found Ride very difficult, but I think that might have been due to my heavy preference towards car racers. I found the bikes far more unforgiving, making me learn the dynamics of bike handling as I went. For example, if you stand on the brakes into a corner and come to a stand still in a car, you stop. On a bike, you’re on your ear. A car can handle a bit of an off-road excursion. On a bike, you’re on your ear. A bit of bump and grind with competitors? You guessed it, you’re on your ear. I fell off. I fell off a lot. To me, making it through a lap without bitumen marks on my helmet was an achievement in itself. The concept of finishing in the top ten, let alone winning, was nothing but a far-off dream. 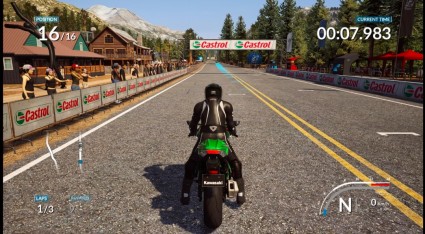 16th place? I’m surprised I’m that far up the field.

As frustrating as I found Ride, there was a sense of exhilaration when you nailed a corner. To sweep though a couple of ‘S’ bends, hitting apex after apex, and gunning it down a straight was a feeling I haven’t often experienced in either a car or a bike racer. I found myself constantly learning, evaluating why things weren’t going so well, and trying something else. I’ve learned the importance of keeping the power on through turns, and that you need to turn in much earlier than a car, and when you’re on the limit in a corner, a bike will tend to throw you off instead of gently losing traction. There was an ‘okay, one more time and I’ll nail it for sure’ appeal that kept me coming back for more. Experienced motorcycle riders could find the handling a bit too sterile, but being someone essentially new to the genre, I found the learning curve steep enough to keep me interested.

There are a few annoyances with Ride however. Loading times are long, and there’s this strange double loading issue where just as you think loading has been completed, you press ‘X’ as required, only to be faced with more loading. There’s a variety of standard camera angles, including chase and helmet cam, but this resets to chase camera whenever you start a new game. Not an issue if that’s your thing, but for a FPR (first-person racer) such as myself, always changing your views can get tiresome. The behaviour of the other riders often didn’t seem quite right either, being prone to sudden bursts of speed on straights, or a resilience when bumping into you that would have seen a lesser rider – i.e. me – faceplanting the track.

Multiplayer in Ride is nothing special. Although it seems you can have up to twelve in a lobby, this was never tested as the maximum I saw at one time was four. I’m not sure if this was a connectivity issue, or just a lack of population on their servers. Competitors can race in various classes and there’s a voting system in place deciding the track to be used. I enjoyed the multiplayer somewhat, as there were others who were just as bad as me, so I didn’t feel left out. Nonetheless, it was pretty standard fare.

I wouldn’t say I thoroughly enjoyed Ride, but I didn’t find it as lacklustre as some other Milestorm titles, such as their WRC series. There were times I was on the edge of my seat as I transitioned from one corner to the other, but there were times I could have easily thrown the controller at the TV and kicked the dog on my way out of the room – I’d suggest a 60/40 split on that front. I wouldn’t suggest you rush out and buy Ride, nor should you avoid it if motorcycles are your thing. I would still consider it an enjoyable experience for someone with more skills and knowledge than me. For motorcycle aficionados it does provide a near-Gran Turismo experience in its level of detail.

For me however, I think I’ll put more time into something I’ll find a little more forgiving.