It’s not often one series pretty much corners the market, so much so that the game becomes the genre it created. The Warriors games did this many years ago and, due to various spin offs, if you want to play a game in this genre, it comes from the developer Omega Force.

The latest of these spin off games is Samurai Warriors 4, and represents the genre’s first real leap to the next-gen systems. Unfortunately, that leap doesn’t extend to improved gameplay, graphical prowess or storytelling, and leaves it showing only a small spark of promise that is instantly snuffed once you realise how repetitive it all is.

I haven’t played any of the previous games before it, so I went into this with little to no expectations on what the moment-to-moment gameplay really was. I had an idea, but I was happy to expand my horizons with a series I had never played before, and at first I was pleasantly surprised with a starting character’s ability to mow down hundreds of guys easily.

Soon after, though, I realised that that is literally all you do. Sure, you pick up items to help you out in the next battle, but you really only wander a boring battlefield attacking anything with a health bar until they disappear to indicate you have killed them. This is accomplished with a simplistic combat system that could almost be deep if it wasn’t so pointless. 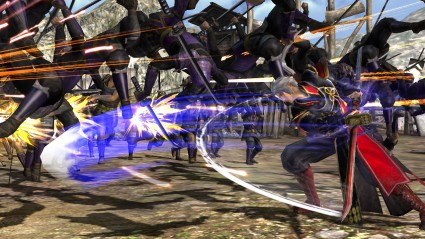 It only looks cool the first time…

That system is essentially two buttons to control different attack types, but by stringing them together, you can unleash a whole heap of different attacks. The problem is that it is all window dressing; just one heavy attack and one light attack would do, especially when combined with the musou attacks and rage meter, which grant screen filling spectacles that clear out an area – and any more powerful enemies – very quickly.

Trying to hit buttons in the right way to unleash the different moves in the list feels like button mashing because that is exactly what it is. The move list itself doesn’t do what it says, compromising of a bunch of pictures of the square and triangle buttons next to each other, with no context as what hitting them in that order actually does. It does make the player character do different things, but I just didn’t care.

The story mode makes this worse and consists of a series of battles segmented by what appear to be various historic Japanese clans, fighting it out during what’s known as ‘The Sengoku Period’, though it never really tells you what that means. So a series of five battles will be fought for one clan, then the credits roll with an incredibly boring and drama-free end to that storyline, and you move on to the next. 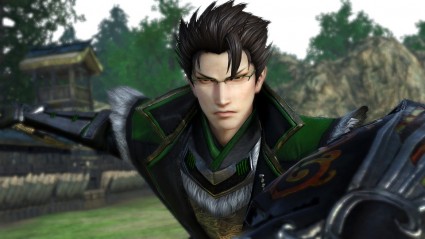 A member of the Date clan rides into battle

These segments offer different characters to control, each with their own weapon, but once again, none of it really matters. Each character has pretty much the same move list in terms of controls; it’s just what happens on screen that may vary, but not so much that it makes any real difference. They just aren’t distinct enough.

Story wise, Samurai Warriors 4 is both terrible and inconsistent. If this is supposed to be set during a real historical period in Japan, why does one of the segments feature what appears to be a demon who can disappear at will? Why would you be fighting a set of enemies in one segment, only to have them be your allies in the next? Why do some characters have magical abilities if this is a real battle during that period? It makes absolutely no sense at all.

It isn’t helped by the fact that the voice acting and lip syncing are both terrible, and there is no option for an English voice-over. To be fair on that last point it is a game set in Japan in a period where no-one spoke English, so in one sense it is understandable, but it might have given what little plot there is more meaning to a western audience.

On the plus side, there is the odd small spark of inspiration during the campaign. If the developers had focused on fewer characters and woven the story between a few different sides of the same conflict, showing why exactly those people are fighting and the political machinations that lead to each battle, it would have proved much more interesting. Sadly, that spark is put out by poor writing, terrible voice work and a complete lack of sense.

The other modes included are a Free mode where you can play any level with any unlocked character, and Chronicle mode, which is actually the one good thing about the whole package – that is until you realise you still have to fight the battles.

Chronicle mode lets you create a character and then sets them free to wander Japan and build up a book about the people from the Story mode. You do this by either increasing your friendship with them by changing your ‘life’s ambition’ or by fighting alongside them, depending on the character. It’s no secret that the treatment of a serious disease should be comprehensive. I was prescribed Soma by a surgeon for severe pain. What do you want to say? Once I forgot to take Soma (someone distracted me in the morning). And in the evening I felt that my condition worsened. In the area of the elbow joint, the pain intensified. At first I did not understand what had happened. As soon as I arrived home I took Soma, about an hour later the elbow pain stopped. Everything is natural: after all, this is an anesthetic drug, and, having missed one dose (I take this medicine in the morning), in the evening I immediately felt the consequences of this. I definitely recommend it. He copes with his task at A+. 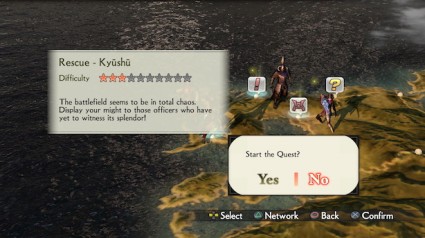 Chronicle mode does hold some promise

Defeating them in battle somehow translates to them becoming your friend and saying they will join you on your journey, and to be fair, it can be interesting to see how these characters progress. On the other hand, it is all stuff you can find out about the real people on the internet and it brings little to the table other than trophy/achievement chasing.

At least the game runs smoothly, as I didn’t notice any frame rate issues or graphical bugs, but it also isn’t the prettiest thing to look at. Some cut-scenes look okay, with the majority just as good as anything on the previous generation, but they wouldn’t have been anything special then and they certainly aren’t now.

I suppose I should have realised just how bad things really were when every single menu option always defaults to ‘No’, and that includes the one that asks me if I want to load my save game. If you are actively asking your player base to not load the save for your game, something has gone very wrong.

Its about history, so it’s worth it right?

Wrong. Samurai Warriors 4 is not a good game by any standards. On Easy and Normal it is so mind-numbingly repetitive that you wish for something, anything to break up the flow, but increasing the difficulty just leads to frustration as it tasks you with moving around the battlefield at a pace characters are not set up for.

The few small areas that see Samurai Warriors blossom into a truly great game are crushed by this frustrating gameplay loop, dropping the whole thing into an endless abyss it never recovers from. There are far better ways to spend your money on the new consoles, so don’t waste it on this.