When Sleeping Dogs was released on last-gen systems, it took me somewhat by surprise. Reviews were positive, not least our own here on TIMJ, but as it arrived during a glut of excellent titles, I missed it until it made an appearance on PS Plus. What followed was my “trying it out” turning into my ignoring a wealth of quality titles asI blazed a trail across Hong Kong, kicking ass and taking names in a style that John Woo would be proud of.

Now here we are on PS4 and Xbox One with the release of Sleeping Dogs: Definitive Edition, which packages a newly buffed and shined main game along with all of the DLC. This includes cars, clothing, and more importantly a couple of pieces of standalone DLC, but is this all enough to warrant another run as Wei Shen?

To cut to the chase and answer the question above, yes, but it’s difficult to recommend to anyone who’s already played it.

It’s true that you do get quite a lot of extra content in the Definitive Edition, but the main game itself is no different at all, albeit in a world that’s better defined and more fleshed out. The graphics are undeniably improved and Hong Kong looks lovely in all its neon glory, but better graphics and more NPCs and vehicles aren’t really enough to warrant a new purchase if you’ve already finished on a last-gen console.

You do, however, get the two major DLC expansions included in the form of Nightmare at North Point and Year of the Snake. These aren’t integrated into the main game but instead are effectively standalone. Sadly, for me, this actually counted against them. Due to the nature of the stories in both, I guess it would’ve been difficult to integrate them into the main story, but because you’re just playing through these briefs vignettes, there’s precious little to do outside of going from one mission to the next, unless you really, really want to spend some time gathering up some collectibles which are, by and large, irrelevant.

The stories in the DLC are fluff as well, fun for a short time but throwaway and forgettable, so sadly there’s not a great deal to recommend there. 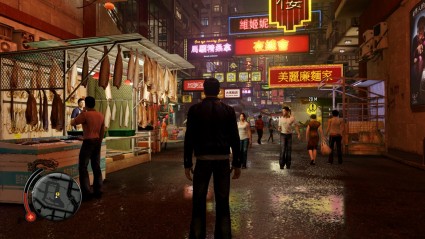 Sleeping Dogs is an attractive game, especially at night

Of course, if you’re new to Sleeping Dogs that changes matters. Then what you have is a sprawling city to explore with oodles of side-missions and other distractions, married to an excellent story of an undercover cop infiltrating the Sun On Yee (Chinese triad). The finest stories are those that deal in shades of grey, refusing to paint characters as simply good or evil, and Sleeping Dogs does a fantastic job of this. It made me care for and sympathise with gangsters, while also causing distrust of some of the supposed good guys.

There are plenty of twists and turns throughout, with some truly cinematic moments, but the best thing is that it’s not afraid of adding a bit of levity by making you do some karaoke, or allowing you to dress up in some questionable outfits. I found that through its entire play time I never got bored or lacked for something to do, it’s consistently exciting throughout.

Everything is carried out with a great sense of style too, including the excellent fighting system that takes its cues from the Batman Arkham series, requiring timed parries and including some brutal but brilliant environmental take-downs. 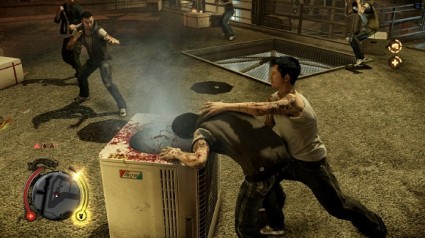 That’s going to leave a mark…

If it has any weaker area, it’s perhaps the driving. It’s very arcadey, and fun with it, but the handbrake handles a little strangely to me, sometimes causing vehicles to slide sideways rather than sliding round corners as you’d expect. The charge feature that allows you to knock cars off the road is an interesting addition too. Fun in action, but hugely unrealistic.

It’s also perhaps worth noting that I suffered from a bug or two in Nightmare at North Point, one of which caused me to reboot my PS4 as I couldn’t get back out at all (although watching Wei Shen run round in circles was quite amusing). I also had some issues with speech overlapping at times. The rest of the game was fine, so I’m not sure what happened with this particular piece of DLC.

Whether to buy or not is a very simple choice really. If you haven’t played Sleeping Dogs before and like the idea of GTA: Hong Kong, with a great story, amazing fighting, and plenty of other activities to keep you occupied, then you should go for it. If you’ve played it already, there’s not enough to warrant a second purchase unless you really, really want to play it again in a slightly upscaled format.