Back in November I previewed the Beta of Ubisoft’s road-based RPG, The Crew, and had a good time with it. Now that it’s been released and its full suite of features are open, has my opinion changed?

The short answer is ‘no’. The Beta gave a taste of the huge playing field, complete with a plethora of activities, and I considered the experience good, solid fun – albeit with some flaws. This still remains the case. The Crew feels unashamedly like an Ubisoft game, but I strangely keep finding parallels with another, completely unrelated, title: Destiny.
I know what you’re thinking. There’s a pretty long bow being drawn in comparing Destiny to The Crew, but gather around and I will spell out my rationale. Anyone who has played Destiny will agree that the story is nothing spectacular. It is merely an instrument to introduce the game universe and get you ready for the post-game, where things really take off. The story for The Crew is afforded a similar status, in that it’s your standard ‘infiltrate and bring down a criminal organisation to avenge your brother’s death’ kind of fare.

In this case, the organisation is an outlaw racing gang called the 510s, with chapters spread throughout the United States. You must work your way up the ranks by defeating the local bosses, gaining the attention and trust of those in charge in the process. All this is conducted under the watchful eye of your FBI handler, who offers you a pardon in return for your assistance. Did I mention you were also wrongfully jailed for the murder of your brother?

All in all, it’s not the most inspirational story, more like a drawn out Fast and Furious movie. What happens in the process, though, is that you get introduced to your expansive playing field as you race around the countryside, progressing up the ranks and becoming acquainted with the various specifications of cars on offer. I considered it very similar to Destiny in this regard, with the story being not much beyond a key to access a much more rewarding experience post-game. That said though it’s not always an easy path. 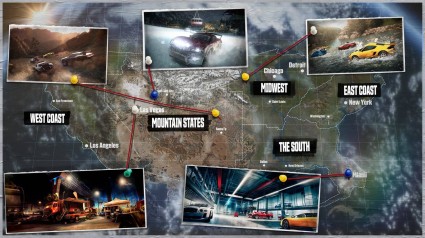 In order to work your way to the top of the 510s, you need to compete in the standard type of events – races, checkpoint runs, takedowns, etc. Car performance develops along with the story, giving you access to cars of different specifications as individual activities require, namely Street, Dirt, Performance, Raid, or Circuit, with enough differentiation between the Specs to be noticeable. Some of the events were great fun – I found all of the dirt based events a treat – but some were merely rage inducing frustrations. I mentioned in the Beta that I didn’t notice any rubber banding when racing, but this seems to have been kicked up a notch in the final release, to the point of being unrealistic. You can find yourself against opponents that somehow manage to catch you, regardless of performance advantages you may have.

Entering an event with a car level way in excess of the required level doesn’t provide any real advantage, yet entering at a lower level makes you uncompetitive. It wasn’t uncommon to find my respectable lead – up to 20 seconds in some cases – erode to zero within the final 2 kms of a race, despite not making a mistake or slowing down. Most victories are hard fought battles, requiring you to make an almost flawless run if you are to have any chance of progressing the story. The need to win each event, with no option to skip, just adds further to the frustration.

To level the playing field, you can call upon other online players to join your ‘Crew’ and assist in events. When you’re running with your crew, as long as one of you wins the event, the event is deemed successfully completed. This sounds good in theory, but I really struggled to get anyone to join me. Calls for assistance went unanswered, and I rarely saw any calls put out from others. This is a pity as the few co-op events I did were much more enjoyable affairs than going solo, especially the takedown missions. 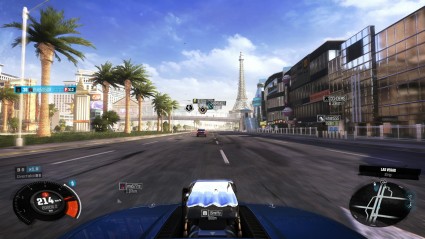 Surrounded by Others – Will no one hear my calls?

Unlike a traditional RPG where you gain weapons, armour, etc, in The Crew you gain engine parts, suspension, brake upgrades, and weight reductions. The problem I had with this is that I really didn’t care. Having spent time in other RPGs poring over stats to see if a particular pair of gloves would offer me an advantage, I didn’t find myself paying my cars fittings the same degree of attention. Whenever you gain an upgrade, you are told how much it impacts on your cars level, giving you the option to fit the part automatically. There is no fear of making the wrong decision, however, as you are prevented from fitting anything that will reduce your cars performance, sending the part to your HQ instead.

For all of its apparent desire to be a RPG, The Crew falls a bit flat. The intent is there, as are the mechanics, but my interest was somewhat lacking as there seemed to be no incentive to take care and pay attention. Not to mention the annoying reloading of your car after every roadside upgrade, tending to interrupt the experience unnecessarily.

From the above, it would be easy to think that I don’t hold The Crew in high regard. Strangely, that couldn’t be further from the truth. I still enjoyed it immensely. Sure, it’s a typical Ubisoft experience, with the map opening up as you synchronise at various data points, and there’s a ton of events and hidden items to whittle away your time, but that didn’t seem to matter. I spent hours just cruising on the open road, watching the scenery change as I moved from one part of the country to another, completing events here and there, and progressing the story when I felt it was time to move on.

It’s not a typical racing game, but I think that’s part of its appeal. I’m not one for normal circuit racing – in reality or in gaming – so racing on real streets in point-to-point events where you never see the same corner twice is more in keeping with my interests. I found the car handling to be fun, although still sitting slightly on the arcade side of the spectrum. I recommend turning the ‘Car Handling Help’ option onto ‘Hardcore’, as using the driver assists tended to dilute the experience further towards the arcade end.

I made it through the story using just the car I bought originally, with no need to buy a more upmarket vehicle, despite there being a variety of cars available. There’s no doubt about it, the world is huge, both in area and offerings, and it sounds clichéd, but the only limiting factor is the amount of time you’re willing to invest: something that it also shares with Destiny. 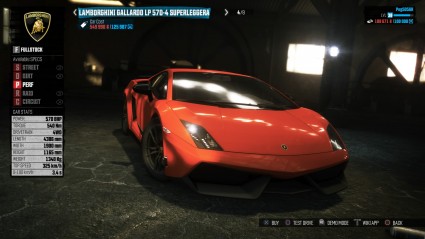 Now that I’ve completed The Crew, I can’t see myself being a hardcore player. Instead I’ll adopt the same approach I have with Destiny, picking it up from time to time to progress a little more and see what else is on offer. Some drivers however have hit The Crew with the same dedication others have with similarly styled RPGs. You only need to you join a PvP multiplayer session if you’re in any doubt about this.

I thought I would be reasonably competitive in multiplayer events, but instead found myself up against opponents who had spent considerable time maxing out their cars, to the point where the only time I saw them was on the starting line. Despite getting my hind quarters handed to me on a platter regularly, I had a lot of fun with the multiplayer, and that’s where I can see The Crew really taking off post-game: again as has happened with Destiny.

There will be many out there who will dismiss The Crew as ‘derivate story, frustrating mechanics, nothing special’ and leave it at that, echoing some of the criticisms made of Destiny. There will be others though who will see through that, and find a huge world that opens up a range of possibilities. If Ubisoft continues to support The Crew, as it appears they intend to, it can only allow the experience to continually grow and improve.

Sure, it won’t ever be on the scale of Destiny, but I think to dismiss it as a poor cousin to Forza Horizon 2 is downplaying its potential. It’s not going to float everyone’s boat, and it isn’t without its flaws and frustrations, but it is certainly one of those games where you get out of it what you want. I enjoyed it a lot and can see myself returning to it regularly for some time to come. I’d suggest anyone interested at least give it a chance, you may just find yourself pleasantly surprised.