I like Tiny Troopers: Joint Ops, not because it is a particularly good game, but because it fills a desperate need in the industry; one which seems to have gone by the wayside in the last few years.

It is definitely not a game that you will be talking about later down the line, but it’s fun while it lasts and provides some nice, simple gaming away from the distraction of AAA games and the more high-profile indie games released over the year.

Essentially a twin-stick shooter, Tiny Troopers: Joint Ops gives you control of between one and four soldiers and tasks you with completing various objectives. These objectives range from simply surviving the mission, to making your way through the level and shooting everything in sight. Once you get a handle on the controls, it can be a blast to run through a level wrecking all you see.

The main problem is that you do indeed control three to four troopers. You are not one entity as you are in say, Geometry Wars, but four working in tandem. While this might not seem like much of an issue, it can lead to your squad breaking up due to the level terrain, and then one or more being killed because they are on their own. They might get stuck behind trees or rocks as well, causing you to go back and get them, which isn’t a major problem, just annoying. 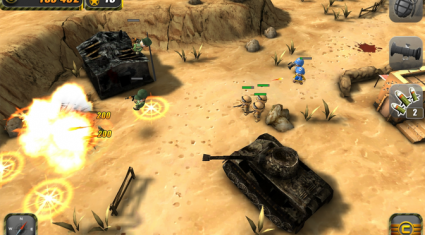 Apart from that niggle, Tiny Troopers actually plays quite well. One stick moves your troops while the other fires your guns and, if you need more fire-power, you can buy or pick up rocket launchers, grenades and air strikes. The troops level up as you use them, granting them faster movement and more hit points, so keeping them alive is worth it, but only just; you can revive them at the end of the mission if you have enough collectibles. It is entirely possible to have them die and not really be bothered, because the upgrade screen allows you to increase their stats before the mission anyway. Of course, they end up slightly less powerful, but it is barely noticeable.

Tiny Troopers isn’t as good as other twin-stick shooters, but not because it is slower or it lacks constant bright explosions, but because your troopers can miss. It sounds slightly dumb, but it isn’t you that misses, its your guys. One of the upgrades is ‘make your troops more accurate’, so they have to miss on occasion to make you want to spend the upgrade points from killing enemies on improvements. It just makes it feel less precise and not as tight and coherent as other games in the genre. 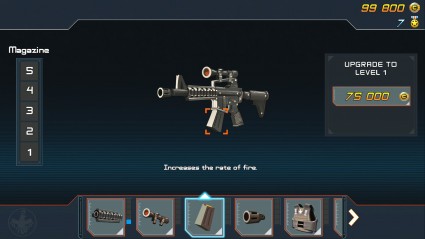 This problem is compounded by the fact that the targeting can be a bit erratic. You have to be fairly on-point with the aiming, because there isn’t a mass of enemies on screen at any one time, so just constantly firing isn’t worth it because there isn’t anything to hit. However, you also have to move around to avoid getting hit when enemies are around, but as you do this, the targeting reticle disappears because the stick isn’t pointing in quite the same place, even though you move both to keep it there. A slight change in stick position solves it, but without a constant, speedy influx of enemies to target, it just adds to the feeling of inaccuracy and brings the experience down. Levels aren’t especially long, so it won’t frustrate you for hours on end, but happens enough to be worthy of mention.

Visually, Tiny Troopers looks fine, with an exaggerated art style that gives everything a light-hearted feel, with no blood or gore. It works perfectly well, it just doesn’t stand out very much. The cut-scenes are comic-styled with voice-overs for the characters as it tells a story over the two campaigns. There’s nothing of real note to wow or engage you here, just serving to give some context to your actions, with the odd funny line. 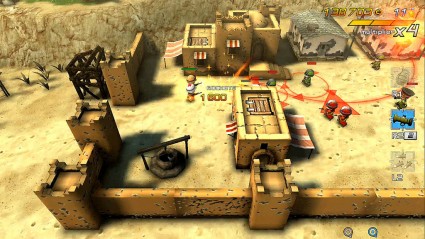 The bad guys are going down!

Okay, so it has problems, should I still buy it?

Yes, you should, but only if you want something to play for a few hours while you wait for the next big game. Tiny Troopers: Joint Ops is one of those increasingly rare ‘B’ tier games that will keep you entertained for a few hours, but won’t be remembered even months from now.

It is relatively cheap and fun while it lasts; it does its job perfectly well in this respect I think and, despite a few problems, isn’t frustrating or outright bad in any way. Worth a shot if you’re bored!