Video-games have become a huge part of the mobile applications market. Some of these games even end up becoming big sellers overnight, with the low prices for these applications making it such a successful and profitable market. So is it a good idea for developers to start porting their video-game applications to more traditional gaming devices? That is the gamble that HotGen Ltd and Rising Star Games are taking, by releasing the To-Fo Collection on the Nintendo DS.

Both To-Fu titles make use of a minimal storyline, but it’s not every day that the main character in a video-game is a piece of Tofu. The main goal is to try to make sure that To-Fu is able to overcome great trials, so it can become the ‘Master of Chi’. It’s the type of video-game that doesn’t necessarily suffer from having such a flimsy storyline, since it’s a puzzle collection. However, the main character is endearing enough to care about it. It’s oddly amusing to see it struggle every time the player has to stretch it. 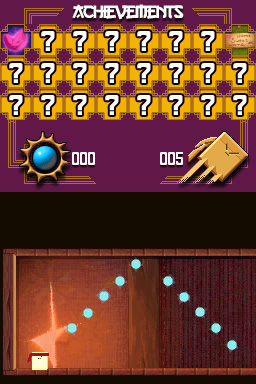 Stretchy To-Fu
Each To-Fu iteration consists of a set number of trials that the player must go through. Movement consists of launching To-Fu to another platform, by stretching it with the stylus. It works a lot better when compared to using an iOS device touch screen, due to the stylus making it easier to accurately throw To-Fu in a specific direction.

Unfortunately HotGen Ltd missed out on a fantastic idea, by not using the 2nd screen to display more of the current trial area. The maps for some of the later trials are larger in size, and being able to see further ahead would have made it possible to know what traps lie ahead. Instead, it means that players will die a few times due to not being able to know where To-Fu will land.

The trials in later stages for both To-Fu video-games become increasingly harder. Fortunately, there is the option to skip tougher trials, by activating an invincible golden To-Fu, which activates after dying a couple of times. Given the nature of the genre, it all starts to look a bit too familiar after a couple of trials. Fortunately HotGen Ltd manages to give players a reason to continue playing, by constantly adding new game mechanics, such as bouncing walls and laser beams to avoid.

To-Fu 2 also makes it possible to unlock extras, such as new costumes for To-Fu, so that players will feel rewarded. Each trial includes various ‘Chi’ blue balls to captures and a challenge for finishing it within a set number of movements. It’s a good way to make sure that players will come back to replay trials, but it would have been nice to have leader boards, so that players could compare completion times for each trial. Instead, players have a number of achievements to unlock.

It’s not all about the texture…
Visually, both To-Fu video-games fail to stand out. The oriental themed artwork is nice to look at, but it all starts to look too similar after a while. It also feels like there haven’t been any major changes, when comparing both to their respective iOS versions. The character design for To-Fu is nice though, and it has quite a few funny facial expressions.

There’s also a couple new graphic assets introduced in the Halloween themed trials, which are found on To-Fu 2. Some of the textures look blurry, showing that it hasn’t been a complete success porting it from the iOS versions. 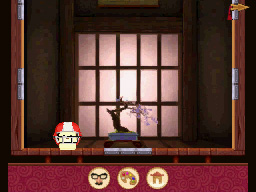 One of the various costumes to unlock in To-Fu 2.

Broken record
The music in To-Fu is so minimal that it is practically forgettable. Both titles share most of the music tracks between them. It’s not exactly the kind of music that will annoy, but it’s also not that inspiring either. It all comes down to the fact that there just isn’t a great deal of music tracks.

Overdone To-Fu
The To-Fu video-games are undeniably some of the best experiences on the App store. Unfortunately the same does not apply to the To-Fu Collection on the Nintendo DS. There are some benefits from playing it on a Nintendo DS, such as the accurate stylus controls. However, iOS device owners are probably better off playing the iOS versions. It’s disheartening to not even see any new content, such as exclusive Nintendo DS levels, or even extra modes. As such To-Fu Collection is a budget title that is only recommended to those looking for a light distraction.