As a youngster I had a brief and unsuccessful flirt with skateboarding, before very quickly realising that tall and heavy wasn’t the best body shape for balancing on a small piece of wood while going up and down ramps. So I had little interest when the original Tony Hawks launched. However, as a large number of my close friends were heavily into the sport and purchased the game, I had to endure my share of nights trying to pull off all those tricks in the virtual world that had eluded me in the real one. As such, I wasn’t exactly excited by the prospect of the reboot; but here we are, and the big question is can it change my mind?

I am Tony Hawk

While there isn’t exactly a story, Tony Hawk’s Pro Skater is essentially about you trying to build a skater from a pretty lame part-timer into the best of the best. This is whilst earning a bucket load of cash along the way to upgrade your skills. With the HD remake, you can make it all a touch more personal by using your XBLA Avatar as your persona.

Skater boy
Initially there are three single-player game modes available which include Free Skate, essentially a practice mode that allows you to enter any of the levels you have unlocked in Career and just familiarise yourself with the layout in preparation for the big scoring run; Score Challenge, which gives you a single run on a level of your choice to post the biggest score you can (which is subsequently posted to the Leaderboards); and the third mode open from the start is the main Career mode.

Career Mode lets you pick from one of the preset skaters or, as mentioned, use your XBLA Avatar and take to the Pro Skater circuit. There are seven levels to master and in each there will be a number of challenges for you to complete. These will be a mix of completing collection sets, performing specific tricks in certain areas of the map or reaching score targets. One of the most iconic things in the series is collecting the letters of the word SKATE which appears on each level, this being one of the easier challenges.

In order to progress to the next area you need to unlock it by completing a certain amount of the challenges on the one before. This also gives you cash to spend on new tricks, new boards or to upgrade your skills across one of the available ten areas. Air boosts your jump height, while Hang Time increases the amount of time you can stay in the air. Ollie boosts your ground jump height, Landing will improve your ability to land tricks and Switch will boost your skills when in switch stance. 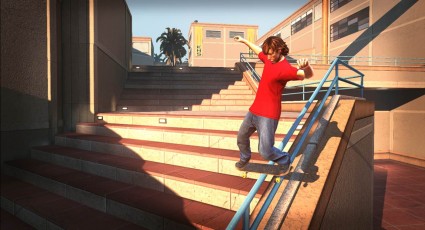 The levels are quite large and varied but ultimately play pretty much the same, as you skate around trying to get all the collectables while pulling off tricks along the way. Everything in the level is interactive which is quite unique even by today’s standards. Aside from the obvious ramps which allow you to pull off a variety of jump tricks, grinds and lip tricks, there are tables, steps, railings, walls, bins, golf buggies, aeroplanes… the list is almost endless. How you interact with this variety of obstacles is entirely up to you with a huge amount of different tricks available for you to master.

The number of individual tricks is actually too much to count, let alone write into this review, but can be broken down into the three basic areas of jumps, grinds and lip tricks. Jumps are performed off of elevated obstacles (primarily ramps) and the height of your jump is determined by holding the A button down and then releasing.

Once in the air you can perform a grab trick with B which gets your skater to hold his board, or a flip trick with X which gets him to rotate his board with his feet. Grinds and plp tricks are both performed with Y and a direction, and when triggered will bring up a balance meter. The longer you hold the balance meter centrally, the longer the trick and the greater the point total for it.

In Career mode points are only collected if you land the trick, and each time you perform the same trick its point value drops, encouraging you to mix it up as much as possible. In between the various obstacles you can perform straightforward ollies (ground jumps) by pressing A, or manuals, which are balance tricks. Performing these ground tricks links your sequences together and earns you combo multipliers, which you will need to master if you’re going to hit the top scores.

One of my biggest gripes with the game was always that the levels and the challenges appear oversized to the very strict time limit, meaning that you have to play the same level a number of times to complete them all. While the volume of obstacles and total interaction gives you plenty of variety, it very quickly becomes repetitive.

What makes this even worse for me is that a lot of the collectables are quite high in the air and require you to jump a particular obstacle to collect, but you can’t look up so will only see them from a distance or when you’ve actually collected them. The map screen shows you where on the map each is but doesn’t remove the ones you’ve got, and also doesn’t highlight your current position so is about as useful as a chocolate tea pot. 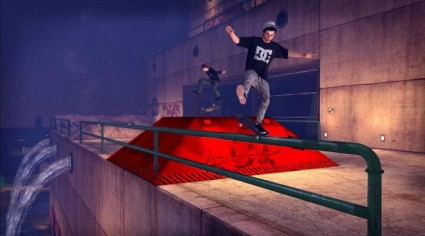 There is one more single-player mode which you will unlock after a few levels of Career called Big Head Survival Mode. Your skater has to perform tricks to prevent his Head (balloon) from inflating and ultimately bursting. The better the trick the more your head deflates, and your success is garnered on how long you survive. This gives a nice little break from the Career mode and can act as a good practice of linking tricks together. The best way to succeed is to build a good sequence and then land it as your head reaches eighty or ninety percent.

Ramp up the visuals
THPS was always a pretty good-looking game and the HD makeover has given it a nice polish that allows it to stand comfortably alongside any other title in the XBLA catalogue. The levels themselves are all pretty large and offer a nice variety in style and colour, but they are generally quite sparse overall.

The various characters are also very well drawn and each has a slightly different style. As you’d probably expect as a skating title, there’s a general grungey look to all the characters and a nice variety in the colour of their outfits, which sits comfortably with the game. Each of the characters is also nicely animated and the tricks, when pulled off correctly, are smooth and seamless. When they’re not, your skater will be thrown around like a rag doll in comedy fashion.

Pro soundtrack
Not many people who know anything about games will have anything negative to say about the soundtrack in THPS; it is widely regarded as one of the best in gaming history. With a superb mix of Grunge, Ska and Punk music blended together, it will make you want to turn the volume up and party whilst it draws you into the skating world on-screen.

Unfortunately, punctuating this glorious soundtrack are some pretty crude and, at times, bloody annoying sound effects. The board noises themselves as you ollie and grind are just about acceptable, but background effects on the levels like crashing through crates or barrels are just dull. The worst of all though are the bells on the School level, which I guarantee will make you want to put your foot through the TV before long.

Skating in packs
There are four multiplayer modes in all, which are slightly different to the original and allow up to four to compete. Trick Attack is your main multiplayer mode where you take to one of the seven arenas and each skater posts their best score with the winner having accumulated the most points. 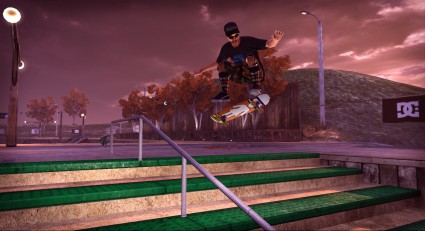 The second mode is Graffiti which separates the arena into tricks and each character is given a colour. As you go around tricking on the various ramps and grinds you paint those you score highest on with your colour, and at the end of the time limit the player with the most areas tagged, wins.

The third mode is the Big Head elimination which is essentially the same as the single-player mode but with more people. You go around the arena pulling off tricks to prevent your head from exploding and the last man standing wins. One of the good things here is that when you go out you can continue in a Free Skate mode to get some practice in for next time.

This leads us nicely on to the final mode which is Free Skate; you and your buddies simply practicing together which I personally feel is totally pointless. My favourite of the modes is Graffiti as it balances the playing field a bit and allows players who perhaps aren’t quite as good to compete in a multiplayer mode.

Ollie or nollie?
I have spent a lot more time with THPS this time around due to writing this review and I have given it every opportunity to win me over. I can see why it was so popular when it was originally launched and the interaction of the levels was truly groundbreaking. I can even see why fans of the series are happy with this reboot, as the HD make over really suits it.

However, while I can appreciate it for what it is I still can’t see the draw. Every level, while having a different look and layout, ultimately plays exactly the same. Having to repeat then in order to complete the challenges to unlock the next stage makes the whole thing become incredibly repetitive. This is slightly less evident in the multiplayer modes, which are fun but will only last for so long.

While I can see skaters of all ages will absolutely love what THPS:HD brings to the table, for anyone else there is very little on offer here.