Perceptor calls that out to Ultra Magnus during the attack on Autobot City in the 1986 classic Transformers: The Movie, and it pretty much sums up the war between them.

Optimus Prime and company took on a superior force, one that has no regard for sentient life, and won every time. Yes, it became predictable, but Transformers hasn’t become a classic franchise for nothing. The brand may have been diluted with the recent Michael Bay movies, but Platinum Games have just released Transformers: Devastation; a G1 inspired game that ticks all the right notes for fans of the bearer of the Matrix, but it might leave more casual fans, especially younger ones that only know the live action movies, a little cold.

The set-up is just like the old cartoons. The Decepticons have come up with some insane plot to destroy Earth and the Autobots have to stop them. Obviously you play as the good guys, because who wants to play as a smelly Decepticon? You can choose between Optimus Prime, Wheeljack, Sideswipe, Bumblebee and Dinobot leader Grimlock. Each plays slightly differently, but that boils down to the amount of health, weapon types and unique specials abilities each has.

To be honest, while I played as each to see the differences in terms of gameplay, you only really need Optimus Prime. He is the good all rounder that can equip powerful weapons and isn’t too slow when transformed. This is how it should be, Prime all the way. 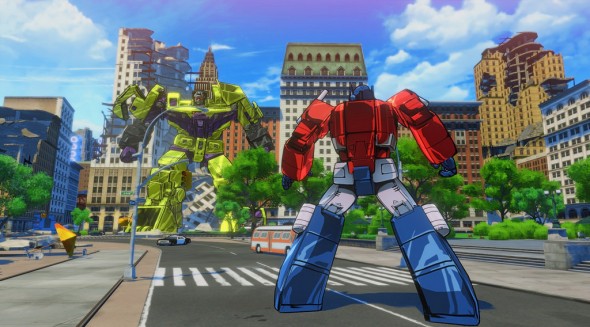 Let’s be honest here, six vs. one: Devastator is outnumbered…

The meat of the game sees you entering a level, running/rolling about until you kill all enemies, rinse and repeat. There are several chapters with each broken up into missions, but these missions are just about all ‘kill everything that moves’ affairs. There are some where you are doing different things, but that is chase something down until you get to a point where you can again kill everything that moves, or on-rails segments in charge of a turret. You do fight plenty of Decepticon bosses, big names if you’re a fan, such as Devastator, Soundwave, and Starscream.

The combat system is really good fun, allowing you to fight using a mixture of melee weapons and guns. The aiming for guns seems a little sensitive and is only really used for battling airborne enemies, and even then it is still preferable to hit them with your melee weapon when they land. It’s a two-button system with a normal and heavy attack that can be linked in a few ways to create those all important combos.

Get so far into a combo and your chosen Autobot flashes. If you hit R1 (I played on PS4), your character transforms into a vehicle, revs up, and smashes into foes with a powerful hit. You can link this in with other attacks, and the times when you just pound on enemies until they blow up feels great, especially when it’s the bigger basic enemies. There some enemies that require some varying of your tactics, like ones that defend themselves with shields that have to be destroyed by gaining top speed and hitting square to perform an uppercut move but, after that one move, you can just keep hitting them again until they die.

There are some light RPG mechanics, so you can level up various stats and customize weapons, as well as create new T.E.C.H, which is a very cartoony way of saying extra upgrades. Equipping one will grant +15% health, for example, and I found this to be fairly pointless; they just didn’t seem to add anything to combat and are entirely optional. The added requirement of a timing based mini-game to create them just adds frustration to an already pointless endeavour.

Weapon synthesis can be useful, but the system is fairly obtuse and I found many of the base weapons to be more powerful than anything I could create. Also – and the following is entirely my opinion – the weapons that the Autobots start with should have been something to work towards rather than the lowest powered ones you get. For example, Optimus Prime has a energon axe in one hand, this an iconic weapon for the character and for fans, but it is the first weapon you start with and therefore the lowest powered. Even after several upgrade paths it still couldn’t do as much damage as later game weapons, and I think this should be the thing to work towards; an almost ‘ultimate’ level weapon. Again, just my opinion, though. 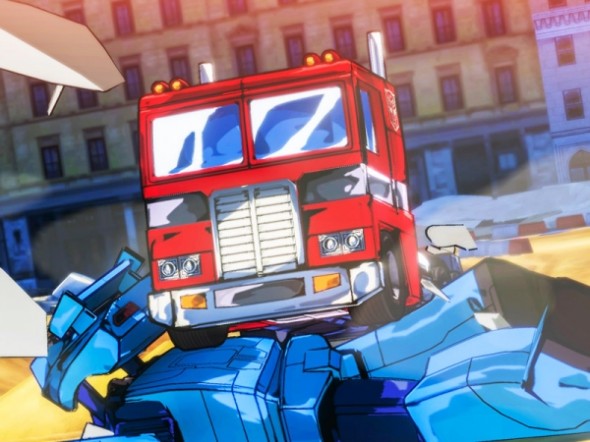 Transform and roll out!

Various collectibles are strewn about each level, some easy to find and others not so much. These come in the form of chests that provide new weapons and power-ups, and other items like Decepticon flags that unlock new concept art. The collectible side of things is a little thin, while it does pad out the game and is a reason to go back into levels, the pay-off simply isn’t worth it. I love the art of some of the current Transformers comics, but on my console I can do very little with that art so there is little point. Viagra sildenafil was a good treatment against hypertension (to specify, pulmonary arterial). So not only being useful in erection problem cases, but was good for me also. My doctor prescribed Viagra to me as needed treatment and I had it under supervision in the hospital. I didn’t notice any severe side effects and can say it is a good thing.

The story only takes a handful of hours to complete, so there isn’t much to Transformers: Devestation, however, true fans will love it. Devastation absolutely nails the look and feel of the original show; the transforming sound is correct, the terminology is correct (all hail Teletraan 1!) and they even got the majority of voice actors to reprise their roles: Peter Cullen as Optimus Prime, Frank Welker as Megatron and Soundwave, and even the guys that played Sideswipe and Bumblebee return.

The only other thing to note is the ‘challenge mode’, which is basically a wave-based mode where you have to survive as long as possible. Once you complete the story, unless you really, really like the combat, there is little point to it. There is no multiplayer at all, so you can’t play with friends and frankly, the combat is good but not so good it will draw people back in over and over again. 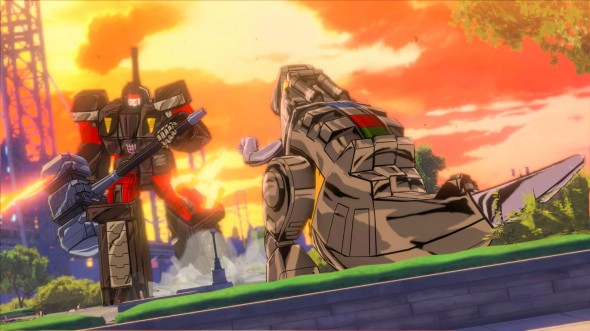 Me Grimlock want to munch metal!

This is the game that G1 fans – including me – have been screaming for all these years and, amazingly, it isn’t half-assed. It feels like Platinum Games were part of the crowd wanting a game just like this, and when they got the chance they jumped on it, crafting the perfect adventure for children of the 80s. For people in the right age bracket, Transformers: Devestation will take you back to your old Saturday mornings, as if you were watching the original cast duke it out. The returning voice actors and obvious love of the classic series mean Platinum have absolutely nailed it

There is a downside to this. Because Transformers has enjoyed so much success in the last few years with the live action movies and new cartoons, the slavish devotion to the original limits its appeal. If you have no reference point for this, and have only recently become a fan, this is not going to be the Transformers you know and love. Hardcore fans will get so much more out of it than you will.

That said, it could still worth a shot as it plays really well and the story has a certain goofy charm that will entertain for the few short hours it takes to complete; you just won’t get quite as much from it.