‘Sic parvis magna’, Sir Francis Drake’s motto, means ‘greatness from small beginnings’. It seems an apt way to start this review of Uncharted: The Nathan Drake Collection, bringing the first three entries in the series to PS4 from their previous home on PS3. So Re-Charted if you will…

Uncharteds 1-3 were perhaps surpassed last generation by Naughty Dog’s own The Last Of Us, but were a genuine highlight in what was ultimately an extremely strong era in gaming. They showcased Naughty Dog’s wonderful handle on storytelling, and whipping along at a matinee film pace that George Lucas or Steven Spielberg would be quite happy with. It might not be entirely accurate to say that Naughty Dog, as a company, have ever really had small beginnings, since they’ve been releasing games at the top of the crop throughout the life of the PlayStation brand, but it would surely be fair to say that they have honed their craft to achieve the aforementioned greatness over the course of the PS3’s lifespan.

Back to the review in question: with all three Uncharted games on one disc, the only thing that could possibly go wrong would be a really poor conversion to PS4. Of course that’s not happened, so read on for one of the least surprising reviews this year, along with some honest appraisal of the odd shortcoming…

I came to the PS3 party a little late, so Uncharted: Drake’s Fortune was the first game I bought and played. Looking back now, it’s the weakest in the PS3 trilogy, but this is all relative, and at the time it was a revelation. The point at which it really sunk in that Naughty Dog were onto something special, for me, was the encounter with the German U-Boat, with Drake pulling himself through small doorways, interacting with his surroundings in a realistic way that I certainly had never seen before.

Touches like this can’t be overstated; they ground Drake and his companions in the game world which, combined with some excellent motion capture and a now-celebrated acting team, results in a world that goes beyond simple gamedom.

If these smaller touches lay the groundwork for what Uncharted stands for, huge set pieces have become its trademark. Drake’s Fortune is relatively small in scale, but get to Among Thieves and you’ll be jumping out of collapsing hotels, escaping a train that’s had a bit of an Italian Job moment, and battling an attack copter whilst making your way along said train. Drake’s Deception ups the ante even further, and if anything the spectacle takes a turn for the slightly silly. Mind-bending drugs, burning chateaux, plane crashes, and journeys through vast desert, are all incredible, but at times it feels as though Naughty Dog’s approach here was, “If it isn’t falling apart and causing Drake to nearly die, we’re doing it wrong”. In the end, it does all become a little too over the top. 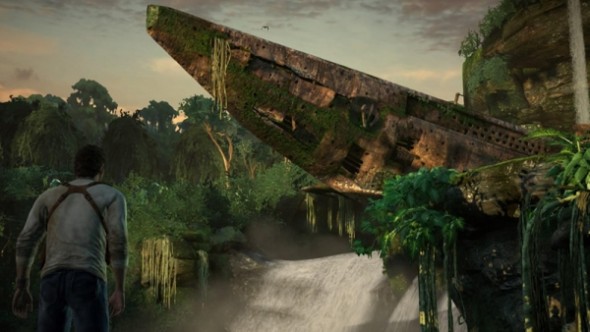 This scene may not seem like much now, but a few short years ago it felt like a really important step in the evolution of video-games

Of course, none of the above tells you anything about how the Uncharted games play. Gameplay falls broadly into three sections; traversing the environment, fighting bad guys with weapons and fists, and puzzle solving. If you’ve heard the comparisons to Tomb Raider then this should come as no great surprise, although Uncharted is slightly more filmic than the older Tomb Raiders, and gun fights are more cover based. The shooting is solid enough, and there’s a good range of weaponry, although nothing you wouldn’t expect to find in a shooter. All handle differently enough too, and the likes of the grenade launcher are immensely satisfying, especially if you nail a group of baddies.

Enemies are fairly intelligent, so they won’t keep popping up in the same place and will make some attempt to outflank you. Get tunnel vision and you may soon find yourself in bother, especially on harder difficulty settings where mistakes are rapidly punished. If there’s any criticism to lay down here, it’s perhaps the sheer quantity of enemies you have to plough through to complete each game. Numbering into the hundreds, this unfortunately detracts somewhat from the matinee feel. Sure, Indy offed his share of Nazis, but this is bordering on bad guy genocide, a point Naughty Dog themselves obviously recognised given a comment made by big bad Lazarevic in Among Thieves at the end.

Stealth also plays a part in combat, and is implemented pretty well. Aside from an early section in Among Thieves, and Drake’s Deception, it’s never forced on you though, it just acts as a way to thin out the numbers a little before you’re inevitably spotted (be warned some enemies seem to have eagle vision) and have to revert to weaponry.

Traversing the environment is perhaps best thought of as Tomb Raider-Lite. Handholds are for the most part quite clearly signposted, albeit generally in a clever manner that ensures they don’t look too out of place. Sometimes a handhold will break, with you needing to quickly move to the next before falling to an impromptu death. There’s no Tomb Raider pixel-accurate jumping here, which is probably a good thing, although some additional challenge would be good, and I look forward to the additions that appear to be coming with A Thief’s End next year. 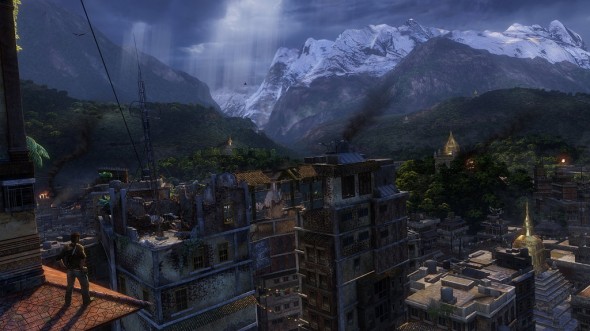 Among Thieves and Drake’s Deception in particular are stunning to behold, particularly incredibly for re-masters of last gen titles

Finally, the puzzles. These are a welcome change of pace, and generally involve manipulating objects to open up a passageway or retrieve an object. They provide enough challenge to keep things interesting without getting frustrating, and some in particular are fairly epic in scale, encompassing huge caverns, or swathes of mountainside.

If the gameplay is solid though without being utterly spectacular, it’s in the characters and stories that Naughty Dog really excels. Drake is an excellent lead, all chiselled jaw, hints of danger, and quick with a barbed quip or self-deprecating comment. His relationship with Sully is utterly believable from the off, and Elena provides an excellent foil both in terms of romance, but also a moral centre, steering Drake in the right direction when he might otherwise be in it more for the loot. Nolan North has an awful lot of games under his belt at this point, but he is quite rightly most well known as Drake, and Richard McGonagle as Sully, and Emily Rose as Elena deserve a great deal of credit too. It’s rare I’d consider mentioning actors for a game, but they play a hugely important part in these titles, and while I’ve only mentioned three here, the wider cast deserve a share of this credit too.

Uncharted 2: Among Thieves is the undoubted highlight. The pacing is better (the walk through the Tibetan village is a wonderfully low key moment that offsets the action perfectly), the story is the strongest, and while it has its share of crazy set pieces, they’re spread out enough that they never feel too over the top. This is Uncharted, and Naughty Dog, bringing their A(AA) game, whether you’re sneaking through a Turkish museum, battling your way through a Nepalese city, or climbing through the mountains. 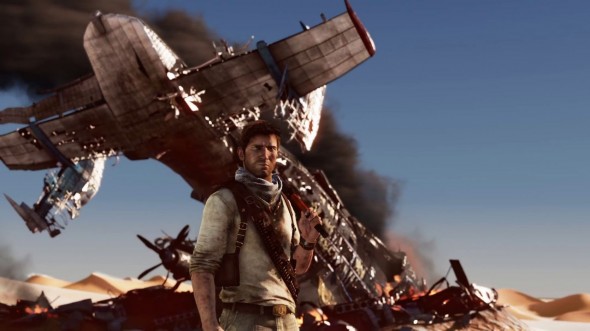 One of the many spectacular set pieces in Drake’s Deception, although it all gets a bit much in the end, hopefully A Thief’s End will dial it back a little

The conversion to PS4 also doesn’t hurt any of the three games. Of course Uncharted looked incredible on PS3, so it’s no surprise how lovely all of them look on PS4. Drake’s Fortune is again clearly the weakest title though, with textures and movement in particular not matching up to those in Among Thieves and Drake’s Deception. The lift up to 1080p and 60fps can’t be underestimated either. I’m not a 60fps elitist by any stretch (I’m more than happy with 30fps for the most part), but the additional responsiveness is a definite boon.

Sadly the multiplayer from parts two and three doesn’t make it to the collection. This is a real shame as it was excellently done, and genuinely worth investing some time in. Instead you get a speed run mode, and a couple of additional difficulty levels. There are some new trophies as well recognising these changes, but I’m not sure that this is the right sort of game for a speed run really, unless online leaderboards of trophy completionism are your thing.

The Uncharted games aren’t perfect, although Among Thieves in particular comes fairly close. However, all three are fine examples of the heights Naughty Dog can achieve, and despite any imperfections, they deserve their place as highlights of the previous generation. They’re all undoubtedly worthy of the remastering treatment, which has been done very well here, the only minus being the loss of multiplayer.

If you haven’t played any of the three games, get out there and do so; you’re unlikely to regret it. Even if, like me, you completed them all multiple times on PS3, it’s amazing how quickly you can get drawn back in. Perhaps the highest recommendation I can give is that I set out to give each a quick blast to get a feel for them for this review, and ended up playing through most of 1 and 3, and all of 2. That you get all three in one package really seals the deal.