Wrestling is a sport pitting men against each other in a raw battle of strength and wits, representing one of the oldest forms of combat pre-dating Christ. In its purist form, it takes an incredible show of strength and skill to better your opponent with a mixture of grapples and throws not too dissimilar in some regards to judo. WWE or World Wrestling Entertainment takes its foundations from that ancient sport and litters it with colour, showmanship some real American hype.

Despite having no interest in the sport, I have got some enjoyment out of wrestling games in the past and I was quite pleased when I heard 2K games had picked up the license for from the dying embers of THQ. This year’s release is the first under the 2K banner and perhaps comes a little early for them to put their usual stamp of detail on it, but surely this would be a positive first step for wrestling fans?

As soon as it loads you can see the 2K games influence in the front-end menus. They are nice and easy to navigate and there is a good deal of polish, albeit with a fairly basic overall look and feel. A simple push of the left stick opens up sub-menus for the various game modes and options so finding what you want is always quick and easy.

There is also a Creation Centre that allows you to create your own Superstar or Diva, Arenas and Storylines, all of which you can upload to the community and share with others. You can also go online to download these creations from others and there are definitely some creative characters out there. The creation centre is quite extensive and gives you a great deal of freedom to come up with something original. Personally I felt there was even more depth in storyline creation, which allows you to enter text freely for discussions as well as play with animations.

There is also a link to WWE Universe which takes you through to some real life match-ups to play and a look at all the current title holders, which you can of course edit if you wish. WWE Universe also gives you a look at the WWE website and overall is a nice bit of fan service if nothing else. 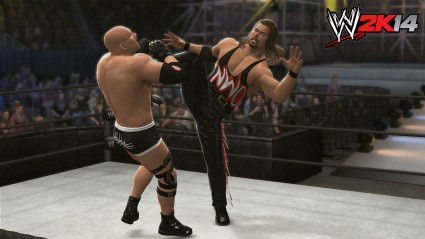 You can play any of a huge number of match types which, as mentioned are all easily selected from the menu. These range from a standard one-on-ones, through traditional Tag Team matches, to Steel Cage, Last Man Standing, Battle Royal and various others. Each match type will have some specific rules or conditions for victory, such as a Steel Cage match requiring you to get out of the cage first to win. This adds a new dimension to your gameplan as it’s not about getting the pin but rather causing your opponent enough damage that they stay decked long enough for you to get away.

This in itself can get quite frustrating. The mechanic of the game is that when climbing the cage, ladder escaping a pin or a submission hold, you effectively break off from the action and a power bar pops up requiring you to hit a specific button at the right time to win or continue. For example when climbing the cage the bar pops up as you get halfway and you have to press A. How full the bar is when you press the button signifies how much momentum you will continue to move with. This then repeats three or four times in as many steps and will often lead to frustration as your opponent has time to get up, dust himself off, have a cuppa and then do the first part of the climb to grab you and pull you back down as you keep hitting the button at the wrong time.

Within your fights, similar timed button presses are needed. For example when you are under attack, the RT icon flashes above your head and when hit with the right timing performs a reversal that gets you out of trouble and turns the tide. Various grapples and special moves also appear to need some fairly specific foot placement and timing to pull off and when it gets to a point you get pinned a power bar again pops up and you have to stop it at a random point to escape with a press of A. This has led to more than the occasional early exit for me as I’ve totally got my timing wrong despite having taken very little punishment beforehand. 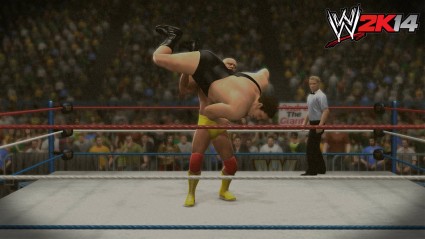 Hulk Hogan and Andre the Giant head up the historical wrestlers

Unlike earlier versions, there isn’t a Career mode as such with pre-set storylines and matches to work through. The main campaign comes in the form of ’30 Years of Wrestlemania’, where you have to participate in and win various epic moments from the history of the WWE.

This plays more like an old-fashioned arcade game where you win to progress on to the next challenge. Playing through these scenarios will take you on a trip down memory lane to the days of Hulk Hogan, Macho Man Randy Savage and Andre the Giant, and up to the modern era as you relive some of these iconic events. Success will not only take you forward to the next challenge but also will unlock new characters to play as and arenas to compete in for the other match types.

Throughout the game you will get a great deal of Rock and Metal style music, which suits with the WWE styling. While I am far from a fan, I can tell that the entrances are met with each Superstar’s trademark music and the now familiar jumbo screen showing them in some of their most illustrious moments. During these ring walks, the spectators wave banners and jump around in excitement as part of what is, overall, a very good looking game.

I have noticed a few moments where characters heads seem to disappear into the canvas and had one or two framerate issues online, but overall it’s very polished and the signature moves in particular are animated in great detail. Commentary and crown noise is also pretty decent, adding another layer of authenticity to the atmosphere. 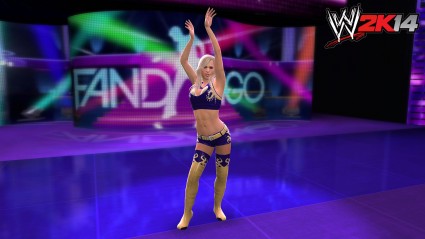 With the exception of ’30 Years of Wrestlemania’, all game modes and match types are available online Matchmaking is done via a choice of ranked or player matches and searches, generally get a quick response. That is if you set all boundaries as Any. In my time with WWE 2K14 I have found that trying to search for a specific match type will often end in frustration. Bizarrely, setting up a game yourself will get you an opponent almost every time in no time at all.

The one major issue I had throughout my time with the game was the frequency and length of the load screens both on and offline. After selecting your competitor, after the ring walk of one character, then the other, after the match… Over and over again any momentum or atmosphere is dampened with a loading screen.

Laying the Smackdown
It’s safe to say that wrestling isn’t my usual entertainment of choice and I was slightly surprised that there isn’t a true career mode, in a sense making WWE 2K14 essentially an old-fashioned arcade brawler. However, what it does, it does pretty well and certainly sells itself to the fans of WWE with decent mechanics, good character likeness and all the match types covered.

For the rest of us, there is enough entertainment here, just, to keep you occupied in short bursts. I doubt if it will keep you away from the CoDs or FIFAs for long, but as something a little different it’s definitely worth a try.