With the Eurogamer Expo expanding, Game detailing their clash-hungry Gamefest, the new and imminent Kapow Comic Con and the rumour mill talking of possible PAX UK,  cons are becoming a bigger thing on these sunny old shores. This is pleasant to see after so many years looking across the ocean in lust at E3, San Diego Comic-Con and GDC.

In fact, a few years back I recieved the generous gift of being able to attend one of these big three, and managed to capture a glimpse of the staggering sights of San Diego’s very own Comic Con. So what is it I am hoping we can learn from these cons, that should make it across the waves to our own cons and expos?

One of the main things I remember, and frankly am still in awe of, is the sheer scale of the packed convention centre in San Diego. Like some kind of Noah’s Ark for the humble nerd, it was crammed full to the rafters with every kind of geekery one would want to imagine (and furries too, who only a select few want to imagine). I will admit, this also led to the longest queues I have ever witnessed, but I suppose you can justify that with some trite phrase about omelettes and breaking eggs, or swings and roundabouts. It’s down to you to pick your favourite cliché on that one.

Eurogamer has seemed to aim higher and higher each year, with the expected turnout of this year being higher than any previous year, and from seeing the expo the previous two years, with a third trip scheduled for 2011’s Eurogamer Expo (keep an eye out on TIMJ for our reports on that); the scale has certainly been increasing too. Will it ever grow to the point that it is a significant rival to its American counterparts? Time will only tell on that one, and until it does I urge you to try and get yourself down there as whatever size they have produced it has always been a standout event. 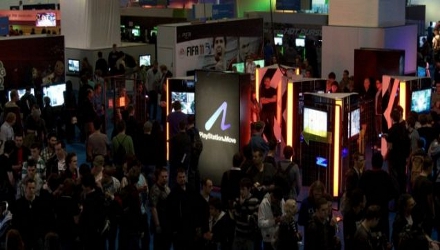 One of the more bizarre aspects of attending the Eurogamer Expo in 2009 was how low-key some demos were. It even stooped as low for one setup (Saw: The Game) to have no signs up whatsoever, and during the five to ten minutes I had sat down on the stool to sample its sub-par delicacies, I was asked half a dozen times what game it was I was playing. Whilst it has improved considerably beyond this (last year even had signs on every game) it still felt a far cry from the overblown antics stateside.

Maybe this is a good thing; an example of our austere British attitude steering clear of the theatrics of those Yankee-doodle-dandies, but, in my eyes, events such as these isn’t the time or the place for half-measures, as with so many areas vying for your attention it is easy to get lost in the crowd. Now, I’m not saying every stall needs booth babes screaming “look over here!” to catch your eye, but more of an effort from those displaying games to offer give-aways, incentives, leaderboards, etc, would make the expo/con experience more memorable.

Now, this isn’t to say these events are entirely without merit when compared to the larger cons. Eurogamer’s focus on getting the GI.biz Career Fair into the action is a wonderful demonstration of the industry’s determination to get the right people in to carry on Britain’s heritage of top-notch game development, and a great chance to meet some of the talented individuals who have helped create the marvels on the show floor.

The future of cons and expos in this country is teeming with excitement and potential, so let’s make sure we show those Americans (and Germans, let’s not forget GamesCom) how it’s done so that they’ll be looking at what they can learn from us.